February 13th, 1542: The Execution of Catherine Howard and Jane Boleyn 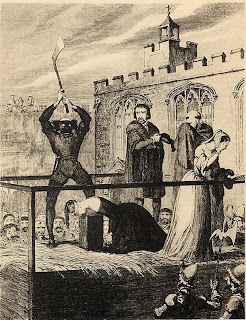 "There is a disproportion about Catherine's career that both repels and fascinates. She was a victim of inconsequentialities which somehow combined to produce a conclusion monstrously disproportionate to the myriad of petty causes... [It is] a study of how chance and personality, morality and adultery, deliberate malice and good intentions, when operating within the limits set by environment, can create a single act in time - the swift descent of the executioner's axe. Catherine's death is not simply a lesson in Tudor morality. It is an exercise in historical causation and encompasses the entire 'sink and puddle' of palace politics and backstairs bickering which throve so abundantly within the garden of Henry VIII's government. It stands as a grim reminder not only of the consequences of inadvertent folly, but also of the fact that all men are in some fashion victims of their age... Catherine Howard's light-hearted idiocy was fatal only when fostered and distorted by family greed, royal absolutism, social callousness and violence... The brilliant spectacle of her career soon faded, leaving nothing but a King grown suddenly grey and aged and a law declaring it to be treason for a lady to marry the King unless she were a virgin... When Henry stood before his council listening to the story of his wife's infidelities, the tears trickled down his cheeks as the illusions and obsessions of his life shattered around him. The King could never forgive Catherine for what she had taken from him - the image of youth. But even in doing her royal husband wrong, Catherine is strangely inconsequential; Henry would surely have grown old and senile, even without the knowledge that he had been cuckolded and cheated. There is a certain inevitability in the tragedy that occurred, but somehow one feels that the shallow motives, the juvenile desires and petty and vain considerations of the Queen had little to do with the final calamity ... She enacted a light-hearted drama in which juvenile delinquency, wanton selfishness and ephemeral hedonism were the abiding themes. Who is to say whose fault it was - Catherine's or that of her age?"