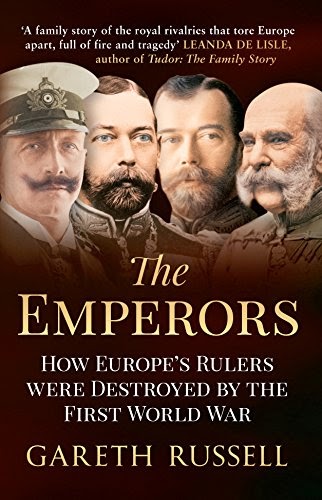 I am so pleased that the wonderful Leanda de Lisle has provided a lovely quote for the front covers of The Emperors, which is due to be released on 28th August. Leanda described the book as, "A family story of the royal rivalries that tore Europe apart, full of fire and tragedy." Leanda is not just the author of one of my favourite historical biographies (The Sisters Who Would Be Queen), but she is also the god-daughter of Tsar Nicholas II's younger sister, the Grand Duchess Xenia Alexandrovna, who fled to Britain after the Revolution.

The book is available from Amazon UK, Amazon US, Amazon Deutschland and Amazon Canada.
Posted by Gareth Russell at 13:53 No comments:


Recently, a Northern Irish customer wanted a cake for the centrepiece at a forthcoming party. (My friends Lauren and Claire handmade one from an Old South recipe for an engagement party, but that's by the by.) This cake was to feature the fairly innocuous co-dependent duo of Sesame Street's Bert and Ernie, with a slogan beneath them that encouraged the full legalisation of same-sex marriage. When this request was handed over to a local bakery, they eventually refused to make it on the grounds that to do so was "against what the Bible teaches". (So is bacon and multi-fabric dresses, but I digress.) The bakery was founded by Christians; even its name is a reference to one of the Twelve Tribes of Israel - the tribe of Asher, which, according to ancient tradition, usually produced the finest bakers. The customer in question was piqued, the bakery has since been accused of discrimination and the hashtag "gaycakerow" is doing the round on the Province's Twitterspace. 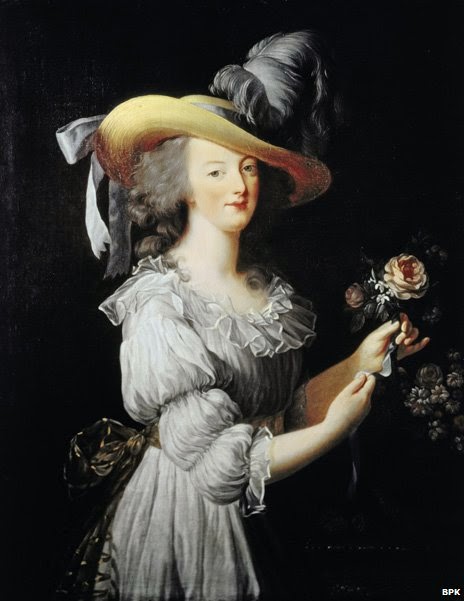 Not since the sublime Marie-Antoinette allegedly told everyone to up their carb in-take with some brioche have pastries proved so controversial. (Marie-Antoinette, shown rocking a linen gown and casual day-time ostrich plumes to the left, never said "Let them eat cake," by the way. Whatever else her faults might have been, crass insensitivity to suffering was not one of them. But that's the historian in me talking, not the cake enthusiast.) That Gay-Cake-Row somehow managed to make the front page of tonight's Belfast Telegraph is depressing enough; so important were North Belfast's butter-cream quandaries that they bumped the story of an 18 year-old girl, raised in a devoutly Christian family, who had been caught on camera bouncing through a night-club in the holiday resort of Magaluf (imagine Sodom and Gomorrah with perma-tan and too much gel and you're half-way there) pulling the penises of approximately thirty random guys into her mouth in return for a free holiday. ("Holiday" turned out to be the club's name for a cocktail. One of the more sordid elements in a story that offers tough competition in the sordid stakes.) Horror at the girl's antics and rather more touching concern for the level of shame both she and her family must now be suffering thanks to Twitter and the media's explosion of the issue, all acting with pearl-clutching disingenuous disbelief that this kind of thing goes on in Magaluf, has all swiftly been replaced by the debate over whether or not the bakery was right to refuse to make "gay cake" and if their offended customer was right to report them to the Equality Commission.


I have been a citizen of the World Web Wide long enough to know that there are few groups in the world who are quicker to scream "discrimination" than ultra-conservative Christians the minute 1000-years of habit is turned on its head and they are no longer allowed to do anything they like based on their religious philosophy. "Discrimination," in this context, all-too-often means "limits." And "gay-cake-row" (oh, what a ludicrous world we live in) has kicked that hornet's nest. Out in full force once again are the bible-thumping zealots who claim to speak for their entire religion and twisted, bitter armchair commentators, who mutter darkly about the "gay agenda", the "lavender brigades", the "gay mafia", the "same-sex totalitarianism". (A similar dispute about a bakery in America produced deadly-series opinion pieces on the blogosphere which compared the gay rights movement to Lenin's League of the Militant Godless, which was responsible for the deaths of hundreds of thousands of Russian Christians and the dynamiting of Russian churches, Nazism and the martyrdom of Thomas More in 1535.) Equally, the liberal and pro-gay-marriage media were broadly, though not universally, sympathetic to rumours that the bakery would or could be prosecuted for discriminating against minorities, under current British law.

In the interests of transparency, I should nail my colours to the mast on the gay marriage issue: I am strongly in favour of it. I think the fact that Northern Ireland is the only area of Her Majesty's United Kingdom that does not have marriage equality is absurd - it offends both my unionism (of the slightly to the Right of NI21 variety before things took an embarrassing turn for the shambolic) and my humanitarianism. In a nation in which secular marriage has been a fact courtesy of registry offices for over a century, it makes no more sense for religious institutions to claim they have the right to define what marriage is simply because they have their own version of it than it does for them to claim they have the right to define what architecture is based on the fact that they happen to own and run quite a lot of buildings. However, I also believe in common sense and limits to the current climate of go-to litigiousness.

If a hotel chain refused to serve a gay couple on religious grounds, I would be outraged and I would support legal action. A corporation cannot take that stand unless it was prepared to refuse service to single mothers, unwed couples, people who have lost their virginity outside of marriage or, if we're really going to go to town with Leviticus or Saint Paul, those who oppose the abolition of slavery. (No deluxe room with a riverside view for you, Mr Wilberforce.) Similarly, if a teacher casually and passively observed homophobia in their classroom, I would want answers as to their dereliction of duty, regardless of their religious faith. (Teachers still do this and they get away it. I carried out interviews with teachers for the bullying storyline in The Immaculate Deception and I came away frankly horrified by what some of their colleagues can get away with.) But when the issue comes to smaller, family-run businesses like Asher's Bakery of Belfast, it's not the same thing as a public sector employee or a national or multi-national business.

The customer in question had no reason to know the bakery was named after a Biblical figure when he placed his order. Even if he had, he may have assumed they would take his order because there are millions of practicing Christians all over the world who are strongly supportive of gay rights and, indeed, there are millions of gay Christians. The customer may even have been upset, hurt or mortified by the bakery's refusal of his order - who wouldn't be? But does that automatically justify a letter to the Equality Commission? In my heart of hearts, I'm just not sure that it did. Asher's did not refuse to serve him because he was gay, they refused to make a cake that contained the phrase "Support Same Sex Marriage" because they felt it contradicted Holy Scripture. Were they right? That's for theologians to decide, and they agree with their colleagues even less frequently than economists or historians do. The point is that Asher's were more than within their rights to refuse to make a cake that they felt morally or politically uncomfortable about. To shrink things down to their most reductive, would we expect a bakery situated in a strongly republican area in Belfast to make a red, white and blue cake to celebrate the Twelfth of July showing William of Orange, our most popular 17th-century Dutch invader, astride his marzipan-sculpted horse? Or a bakery at the opposite end of the town to gladly make a cake for this year's Ard Fheis?


People in small businesses like Asher's have a right to hold onto their opinions. Equally, the jilted customer can let his or her friends know that this bakery is opposed to gay rights etc., and those people can, in turn, choose to take their custom elsewhere for all future orders, regardless of their nature, if they feel strongly enough about the issue. That's freedom of choice; it's what makes capitalism, big and small, tick. And, for what it's worth, it's a big running theme in Genesis and its 65 critically-acclaimed sequels. (78 if we're counting the Apocrypha, which we should be, but that's a different debate for a different time. Maybe a dinner party over a glass of wine? Who knows?) One could justifiably query if someone should go into business with these kind of views, but I tend to think people should be able to and then pay the price for having principles, whatever that might be. There is so much nonsense written about gay people and Christians online and in the press, and this story does neither group any favours. Is the conscience of a privately-run bakery and their choice of what to ice or otherwise really worthy of front page news? Asher's Bakery aren't martyrs, even though there are those who will be quick to wreath them in the garland of John 15:18. (Only an era as soft as this one could see the crown of martyrdom in something like this...) They are a bakery who made a decision based on how they interpret a few verses in a much-debated religious text. For somebody else, the dividing line on where to bake might be politics, syntax or the imagery itself. Would a baker who was gay or who supported gay rights be wrong to turn away a cake that asked them to craft in icing, "Keep marriage between a man and woman" or "God made Adam and Eve, not Adam and Steve"? (If they did, I can take a guess at who would be the first people to claim discrimination.)

There are bigger fish to fry/cakes to ice (what a truly awful pun, I detest myself) than this. Let's bring solicitors and the press into the fray only when the situation really warrants it. If you feel strongly about something this specific, this localised, then, for me, the answer is in our wallets, not a solicitor's office. And to the customer in question, I hope whoever made the cake in the end did a fantastic job and that you had a wonderful party. To the Equality Commission, this seems a bit like over-egging the proverbial cake. (Once you've hit one stinker of a metaphor, it's best to keep going, I find. No regrets.) To the bakery, to paraphrase an apocryphal quote so often attributed to that old rogue of the Enlightenment Voltaire, I don't agree with what you said, but I have to reluctantly defend your right to act upon it. And any previous cakes I've nibbled from your shop have been delicious.
Posted by Gareth Russell at 22:15 6 comments: