The Feast of the Annunciation 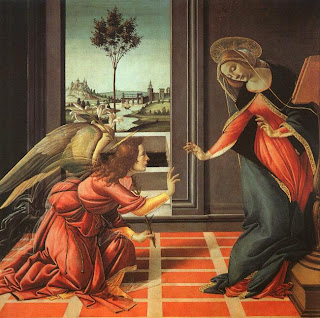 "And in the sixth month, the angel Gabriel was sent from God into a city of Galilee, called Nazareth, to a Virgin espoused to a man whose name was Joseph, of the house of David; and the Virgin's name was Mary. And the angel being come in, said unto her: Hail Mary, Full of grace, the Lord is with thee: blessed art thou among women."
- The Gospel according to Saint Luke, Chapter 2

The Feast of the Annunciation - which falls on March 25th - is the holy day when Christianity traditionally celebrates the visit of the Archangel Gabriel to the Virgin Mary (above.)

According to the Gospel of Saint Luke, on that day the Virgin miraculously conceived of the Christ. Of course, centuries later when the Christian Church decided to codify the liturgical calendar, no-one knew the exact date this event was supposed to have occurred, anymore than they knew the date of the "real" Christmas. To keep matters simple, the conception of Christ was celebrated on March 25th, exactly nine months before His birth on December 25th. In much the same way as the Virgin Mary's birthday (September 8th) is celebrated precisely nine months after her Immaculate Conception (December 8th.)

On a more biblically-solid note, it is also to this part of the Bible that we owe the inspiration for the most frequently repeated prayer in the Christian world - The Hail Mary ("Ave Maria.")

For many centuries, March 25th was often known by people in England as "Lady Day," in honour of Our Lady, the Virgin Mary, rather than by its longer title of "Feast of the Annunciation." Many people do not know that until 1752, the British New Year actually started on Lady Day, rather than January 1st. The reasons for this were twofold - firstly, the conception of Jesus Christ in human form was felt by Christians to mark the beginning of a new era in human history and it was therefore considered appropriate to start the new year on March 25th, out of respect for Christ. Secondly, Lady Day usually falls very close to the Equinox, when the length of day and night is roughly equal, marking the end of the winter and the beginning of spring - hence another reason to celebrate the new year in March, rather than in the dark, depressing and often hunger-filled month of January.

Occasionally, this could cause confusion for continental visitors to England - between January 1st and March 25th, they were technically in two different calendar years. For example, King Charles I was executed by a rebellious parliament on January 30th 1649, but because of the English habit of celebrating the new year on Lady Day, the King's grave at Windsor Castle was marked with his year of death as "1648" (and still is today.)

In the reign of King George II, Britain finally bowed to the changes of the calendar and England, Scotland, Ireland and Wales began to celebrate the New Year on January 1st and the new year thus became a purely secular festival which we are more familiar with today.
Posted by Gareth Russell at 23:46