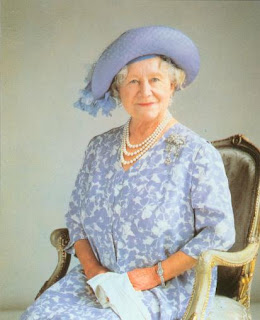 His Royal Highness The Prince of Wales and Her Royal Highness the Duchess of Cornwall attended a memorial service in Saint George's Chapel at Windsor Castle today to mark the tenth anniversary of the death of Queen Elizabeth the Queen Mother, His Royal Highness's maternal grandmother.
Queen Elizabeth was born Lady Elizabeth Bowes-Lyon on 4th August 1900, the ninth child of Claude, 14th Earl of Strathmore and Kinghorne, and his wife, Nina Cecilia (née Cavendish-Bentinck). During the First World War, Elizabeth helped run Glamis Castle, when it was converted into a convalescent home for wounded soldiers; her mother's ill-health prevented her from executing her duties as chatelaine. Elizabeth was instrumental in saving the legendary castle from destruction from an accidental fire during those years, in which she also made her Society debut as a debutante in London. She came from a particularly close family and all were devastated when her elder brother, Fergus, was killed in active service in 1916. Another brother, Alexander, had died as a result of cancer five years earlier, at the age of twenty-four.  Some of the very few occasions on which Elizabeth was subsequently to show strong upset in public was whilst attending the memorial services at The Cenotaph every November.
At the age of twenty-two, Elizabeth married King George V's second son, Prince Albert, known in the family as "Bertie". He was a shy but dignified man, with a strong sense of duty who often felt frustrated by the stammer he had developed as a child. Elizabeth was tireless in her support of her husband and in her relentless quest to find him a "cure" for his speech impediment, something movingly and fairly accurately dramatised in the recent Oscar-winning movie The King's Speech. Through her marriage, Elizabeth acquired the titles of Duchess of York, Countess of Inverness and Baroness Killarney. One of Elizabeth's first official visits as a member of the Royal Family was to Northern Ireland, where she commented on the warmth of the reception she received from the crowds in Belfast. The visit also gave the young Duchess a chance to stay with old friends, who were members of the Anglo-Irish Ascendancy, mainly relatives of the Duke of Abercorn, who was then the Governor of the newly-created state of Northern Ireland. The Duke and Duchess of York took a townhouse in London as their first main residence, as the Duchess was still in her early twenties and allegedly reluctant to abandon the fun and excitement of the London Social season. The Royal couple subsequently had two children - Princess Elizabeth, the current Sovereign, born in 1926, and her younger sister, Princess Margaret Rose (1930 - 2002). In 1936, Elizabeth's husband became King and assumed the regnal name of King George VI, following his brother's decision to abdicate in order that he might marry Mrs. Wallis Simpson. King George ruled with exemplary dedication to his country from 1936 to 1952 and he led the nation through the horror, trauma and difficulties of the Second World War. Due to her many public appearances, her refusal to abandon London even during the Blitz and her constant good humour, Queen Elizabeth was widely credited with boosting and sustaining the public's morale during the war years. She was complimented on this fact by both Winston Churchill and, rather bizarrely, by Adolf Hitler, who grudgingly described her as "the most dangerous woman in Europe".
In 1952, King George lost his battle with lung cancer and his widow assumed the title of Queen Elizabeth the Queen Mother; her daughter assumed the throne as Sovereign. The Queen Mother continued to remain one of the most consistently popular members of the Royal Family, as her 100th birthday celebrations in August 2000 showed. Even her extravagance and love of horse-racing and gambling were generally affectionately regarded by the public and she was well-known for her wit, charm and her joie de vivre. Upon receiving a magnum of champagne from sailors in the Royal Navy, the eighty-something year-old Dowager publicly joked that she was planning to drink the whole thing herself when she got home.
The Queen Mother passed away at Royal Lodge, her home in Windsor, on 30th March 2002, at the age of one hundred and one. She was buried next to her husband in Saint George's Chapel, after a State funeral. Controversy was caused at the time when the BBC news reader making the official announcement accidentally forgot to don a black tie when broadcasting the news for the first time to the nation.
Reflecting on Queen Elizabeth's enduring popularity, her commitment to nearly eighty years of public engagements and her indefatigable devotion to the monarchy and to the nation, the Archbishop of Canterbury was moved to quote the words spoken of Queen Esther in the Bible, when delivering the Queen Mother's funeral eulogy, "And who knoweth whether thou art come to the kingdom for such a time as this?"
I was on holiday in Scotland with my family at the time The Queen Mother passed away and had the opportunity to sign one of the many books of condolence set up across the nation; in my case, one at the Palace of Holyroodhouse in Edinburgh. She was a very great lady, with style, wit and a naughty sense of humour. She was the last of her kind and I admire her tremendously.
The moment the television was halted across the nation and the official announcement was made, followed by the customary playing of the National Anthem for such announcements, can be watched below.
Posted by Gareth Russell at 22:52 2 comments:

The plight of Christians in the Middle East

The Wall Street Journal is carrying a rather sobering opinion piece by Michael Osen, the State of Israel's ambassador to the United States, about the persecutions faced by Middle Eastern Christians.

"The church in Bethlehem had survived more than 1,000 years, through wars and conquests, but its future now seemed in jeopardy. Spray-painted all over its ancient stone walls were the Arabic letters for Hamas. The year was 1994 and the city was about to pass from Israeli to Palestinian control. I was meeting with the church's clergy as an Israeli government adviser on inter-religious affairs. They were despondent but too frightened to file a complaint. The same Hamas thugs who had desecrated their sanctuary were liable to take their lives.The trauma of those priests is now commonplace among Middle Eastern Christians. Their share of the region's population has plunged from 20% a century ago to less than 5% today and falling. In Egypt, 200,000 Coptic Christians fled their homes last year after beatings and massacres by Muslim extremist mobs. Since 2003, 70 Iraqi churches have been burned and nearly a thousand Christians killed in Baghdad alone, causing more than half of this million-member community to flee. Conversion to Christianity is a capital offense in Iran, where last month Pastor Yousef Nadarkhani was sentenced to death. Saudi Arabia outlaws private Christian prayer.... Since the Hamas takeover of Gaza in 2007, half the Christian community has fled. Christmas decorations and public displays of crucifixes are forbidden. In a December 2010 broadcast, Hamas officials exhorted Muslims to slaughter their Christian neighbors. Rami Ayad, owner of Gaza's only Christian bookstore, was murdered, his store reduced to ash. This is the same Hamas with which the Palestinian Authority of the West Bank recently signed a unity pact."

The full article can be read here.