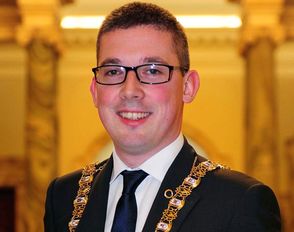 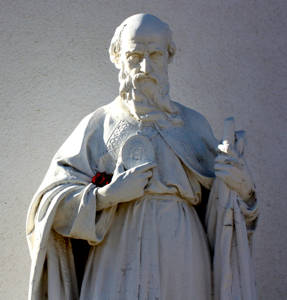 Saint Jude the Apostle, identified with Thaddaeus the Apostle by some (but not all) historians of the Church, was one of the Twelve Apostles of Christ and a relative of Jesus and Mary. Both he and the traitor-apostle, Judas Iscariot, would have shared essentially the same name - a variant of the word "Judah". He was a relative, probably a cousin, of Saint James the Just, and ancient writers tell us that Jude preached the gospel in Judea, Samaria, Idumaea, Syria, Mesopotamia and Libya. According to the early Church chronicler, Eusebius of Caesarea, Saint Jude then returned to Jerusalem, where he assisted with the election of Saint Simeon as bishop of Jerusalem.

Saint Jude was martyred in about 65 A.D., along with another one of the Twelve Apostles, Saint Simon the Zealot. They were preaching either in Beirut or in modern-day Iran when they were beaten to death and then beheaded. Due to this, Saint Jude the Apostle and Martyr was venerated as a saint in Christianity long before the formal process of canonisation was ratified. This is known as a "pre-congregation saint."

Today, Saint Jude is venerated by the Roman Catholic, Anglican, Eastern Orthodox, Lutheran, Oriental Orthodox and Syriac Church of the East denominations of Christianity. His feast day in the Eastern communion is 19th June; in the West, it is 28th October. He is the patron saint of lost causes and cases most despaired of. He has a reputation for being one of the most faithful and beloved of Christianity's holy figures.

A beautiful prayer to Saint Jude, which I like very much, is: -

Oh Holy Saint Jude, Apostle and Martyr, great in virtue and rich in miracles, near kinsman of Jesus Christ, faithful intercessor of all who invoke your special help in time of need.

To you I have recourse from the depths of my heart and humbly request assistance. Help me in my present and urgent petition.

In return, I promise to make your name known and cause you to be invoked.

Saint Jude, Apostle, martyr and relative of our Lord Jesus Christ, of Mary and Joseph, intercede for us.

I think it's lovely and I hope it helps someone!
Posted by Gareth Russell at 20:01 1 comment:

Writing from the Tub's review of "Popular" 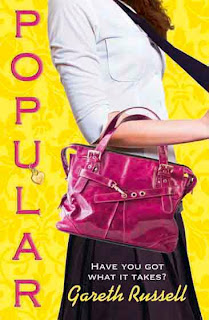 The lovely Carly Bennett has written a review of my novel Popular on her blog Writing from the Tub. For those who have enjoyed Ci-Devant and might enjoy reading Popular, you can pick up copy from the UK here, Ireland here, the United States here, Canada here, Spain here, South Africa here, Australia here and New Zealand here.
For Carly's full review and to find out some of her favourite lines from the novel, click here.


"We don't live in happiest of times at the moment, do we? We're in the middle of a recession, the news is all doom and gloom and, as I'm writing this review, it's pissing it down with rain. Sometimes we all need a book to dive into that takes us away from the stresses and strains of every day life. If you're looking for that book then look no further because Popular is the perfect antidote to all of your worries.

Popular will have you laughing from page one and keep you thoroughly entertained until the end of the story..."


It's always lovely reading reviews like this and a big thanks to Carly.
Posted by Gareth Russell at 13:41 No comments: