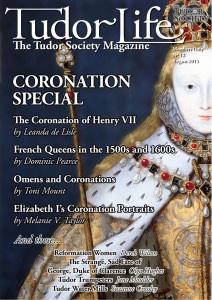 The August edition of Tudor Life, a members e-magazine which I have the privilege to edit, is now available via the Tudor Society. 22nd August is the Feast of the Coronation of the Virgin in the Church calendar, which gave me the idea for an issue themed around coronations - along with articles from our regular contributors, including an analysis of Elizabeth I's iconic coronation portrait by Melanie Taylor, we also have some fantastic guest pieces from eminent historians.

Leanda de Lisle, best-selling author of After Elizabeth, The Sisters Who Would Be Queen and Tudor: The Family Story, writes about the coronation of Henry VII, the first Tudor king. Dominic Pierce took time off from his forthcoming biography of Queen Henrietta-Maria to reflect on the coronation of her mother as queen of France amid political chaos in 1610. Toni Mount, author of Everyday Life in Medieval London, Dragon's Blood and Willow Bark: The mysteries of medieval medicine and The Medieval Housewife, takes a look at the crowds watching the coronations and how they interpreted omens from what took place. Derek Wilson, author of some hugely successful and wonderful books on the Tudors, including A Brief History of Henry VIII: Reformer and Tyrant, In the Lion's Court and The Uncrowned Kings of England: The Black Legend of the Dudleys discusses the powerful women of the Protestant Reformation.

The Tudor Society, which publishes Tudor Life, is increasing its membership and drive. Along with the magazine, membership also brings access to video talks by historians and experts once a month, who then follow that up by conducting a live web chat with members.

Next month's edition of the magazine will look at the Tudors in movies, music and the arts, for which I'll have contributed an article on Elizabeth Taylor and the casting of the Oscar-winning Anne of the Thousand Days.

You can find out more information about the magazine and the Society, here - www.tudorsociety.com.
Posted by Gareth Russell at 22:19 1 comment: