My new book: a biography of Queen Catherine Howard 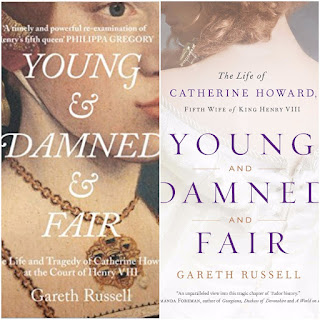 As readers of this blog will know, for the last few years I have been working on a biography of Henry VIII's fifth wife, Queen Catherine Howard. I am so very happy that 2017 is the year of its publication, with Simon & Schuster publishing Young and Damned and Fair in its US and Canadian edition, and HarperCollins publishing it for the UK and most of the Commonwealth. Young and Damned and Fair is also available in audio book, narrated by the wonderful Jenny Funnell.

I would like to take this opportunity to thank any readers of Confessions of a Ci-Devant who took the time to encourage me to write a full-length biography of a Tudor queen. It was a thrillingly exhausting process and I left Catherine's company with reluctance, after so long spent studying the story of her life.

More information is below, with links to the different editions.

***
Young and Damned and Fair by Gareth Russell
About the book


Written with an exciting combination of narrative flair and historical authority, this interpretation of the tragic life of Catherine Howard, fifth wife of Henry VIII, breaks new ground in our understanding of the very young woman who became queen at a time of unprecedented social and political tension and whose terrible errors in judgment quickly led her to the executioner’s block.

Including a forgotten text of Catherine’s confession in her own words, color illustrations, family tree, map, and extensive notes, Young and Damned and Fair changes our understanding of one of history’s most famous women while telling the compelling and very human story of complex individuals attempting to survive in a dangerous age.

Praise for Young and Damned and Fair

“If you’re going to take these sorts of risks, you need some serious historical heft. This Russell has, and in abundance. To the vivid phrasing of a novelist, he adds a forensic eye for fact and an encyclopaedic knowledge of the personalities of the late Henrician court … Russell is a formidable new talent from whom big things can be expected”. – Sarah Gristwood, author of Game of Queens: The Women who Made Sixteenth-Century Europe, in BBC HISTORY MAGAZINE
“Scholarly yet highly readable...fresh and compelling...a stunning achievement...Catherine is given a makeover so complete that she is virtually unrecognizeable from the hopelessly naive girl of traditional history books.” – Tracy Borman, author of Thomas Cromwell: The untold story of Henry VIII's most faithful servant, in THE SUNDAY TIMES
“Bold...assured...A novelist turned historian, he veers with laudable theatricality between the claustrophobic and the panoramic, from intimate, febrile exchanges in noble and royal households to the public spectacle of courtly high diplomacy...Let us hope he fixes his sharp eye on the further, more opaque past--here is a historian unafraid of the dark, whether of depravity or documentation.” – Minoo Dinshaw, author of Outlandish Knight: The Byzantine Life of Steven Runciman, in THE DAILY TELEGRAPH
“Russell expertly tells a tale of jewels and dancing and thrilling trysts that sees Catherine move dizzily towards the block.” – Jessie Childs, author of Henry VIII's Last Victim: The Life and Times of Henry Howard, Earl of Surrey, in LITERARY REVIEW
“Russell's is an excellent account, putting the oft-ignored Catherine in her proper historical context....he is a scrupulous historian.” – THE DAILY MAIL
“Russell's portrait effectively underscores the machinations of this volatile court, the treachery of sycophants, and the importance of the all-seeing servants. Dense with material and flavor of the epoch.” – KIRKUS REVIEWS
“The tragic story of Henry VIII’s fifth queen has been covered before but never quite like this. Young and Damned and Fair digs deep into dark and twisted underworld of Tudor nobility” - HISTORY OF ROYALS magazine
“Highly readable and peppered with engrossing stories, this book is also fascinating for its details about what was considered sexually moral in 16-century England. Biography lovers and those intrigued by the lives of the royals will welcome this tragic story of Henry VIII’s fifth wife.” – LIBRARY JOURNAL

"Best Historical Biography Ever ... I can't recall loving a non-fictional book so much. The attention to detail, combined with Gareth Russell's exquisite writing, make this biography the dream for history buffs, and an excellent start for people who don't usually give a chance to this genre. Absolutely loved it!" - Waterstones Bookseller Review
"This fascinating and ultimately heartbreaking account of Henry VIII's doomed fifth wife brings to life the cruel, gossip-fueled, backstabbing world of the court in which Catherine Howard rose and fell. The uncommonly talented Gareth Russell has produced a masterly work of Tudor history that is engrossing, sympathetic, suspenseful, and illuminating." - Charlotte Gordon, author of Romantic Outlaws: The Extraordinary Lives of Mary Wollstonecraft and Mary Shelley, winner of the National Book Critics Circle Award for Biography
“Young and Damned and Fair is a gripping account of a young woman’s future destroyed by forces beyond her control. Gareth Russell moves effortlessly between Catherine Howard's private, inner world and the public life of the Henrician court, providing an unparalleled view into this tragic chapter of Tudor history. This is an important and timely book.” - Amanda Foreman, author of Georgiana, Duchess of Devonshire and A World on Fire: An Epic History of Two Nations Divided
“Securely rooted in the sources and mercifully devoid of sentiment, this is the most fully rounded, best written biography of Catherine Howard we have so far.” – Julia Fox, author of Jane Boleyn: The True Story of the Infamous Lady Rochford
“In Young and Damned and Fair Gareth Russell marries slick storytelling with a great wealth of learning about sixteenth-century personalities and politics. The result is a book that leads us deep into the nightmarish final years of Henry VIII’s reign, wrenching open the intrigues of a poisonous court in a realm seething with discontent. At the heart of it all is the fragile, tragic figure of Catherine Howard, whose awful fate is almost unbearable to watch as it unfolds. This is authoritative Tudor history written with a novelist’s lightness of touch. A terrific achievement.” – Dan Jones, author of The Plantagenets and The Hollow Crown: The Wars of the Roses and the Rise of the Tudors
“This is a timely and powerful re-examination of Henry's fifth queen … The author has done some beautiful new research to indicate that Catherine was not as foolish as some historians have suggested, and that her death was managed and manipulated by her offended husband, purely for his own revenge. It's particularly strong on the detail of Catherine’s short reign and the reaction of those who tried to defend her. I love it when historians take the women who have been neglected by history seriously and study their lives rather than accepting stereotypes.” – Philippa Gregory, #1 New York Times bestselling author
“A magnificent account of the rise and fall of Henry VIII's tragic fifth queen - compelling, thought-provoking and above all real. In Russell’s meticulously researched narrative Catherine Howard and her household are brought to life as never before.” – Adrian Tinniswood, author of The Long Weekend: Life in the English Country House Between the Wars
“This is now my go-to book on Catherine Howard.” – Claire Ridgway, author of The Fall of Anne Boleyn
“Russell breathes new life into the Tudor world as we know it and I found myself eagerly devouring every delectable morsel, only becoming aware at the end of the page that I had just learned at least five new things without even realizing it. Russell's take on Henry VIII's fifth queen is nothing short of brilliant.” – Adrienne Dillard, author of The Raven’s Widow: A Novel of Jane Boleyn
“Like Eric Ives with Anne Boleyn, Anne Somerset with Elizabeth I and Antonia Fraser on Marie Antoinette, Gareth Russell has written the definitive book on Catherine Howard and deserves to be seen as the authority on this subject.” – James Peacock, President of The Anne Boleyn Society
“A tremendous read … This book is also about human judgement, about fecklessness, about cruelty, about luck, and about a destructive love affair. Gareth Russell's elegant prose has an effortless touch.” - Dominic Pearce, author of Henrietta Maria
"This book deserves to be seen as the bible on Catherine Howard and her life. It is superbly well researched and excellently written." - Samantha Morris, author of Cesare Borgia
“Young and Damned and Fair is everything a historical biography should be. Highly recommended.” – Kathryn Warner, author of Edward II: The Unconventional King

Young and Damned and Fair is available through most independent bookstores. It is also stocked in the US by Barnes & Noble and Amazon. And in the UK, by chain bookstores, like Waterstones, and online, by Amazon UK.

You can also find the audio book version here (for UK listeners) and here (for US).
Posted by Gareth Russell at 14:26 No comments: