The competition to win a copy of Sarah Bryson's new book "Mary Boleyn" has closed, and congratulations to Ines Eusebi, who correctly answered that the Christian or given name of Mary's mother was: Elizabeth.

There were over a hundred responses, and the names of everyone who gave the correct answer were entered into a random generator that then selected Ines's name. A huge thanks to everyone who participated, and to Sarah for stopping by to share her thoughts on Anne Boleyn's enigmatic sister.
Posted by Gareth Russell at 13:39 No comments:

"Mary Boleyn" by Sarah Bryson: giveaway and a look at Mary in popular culture 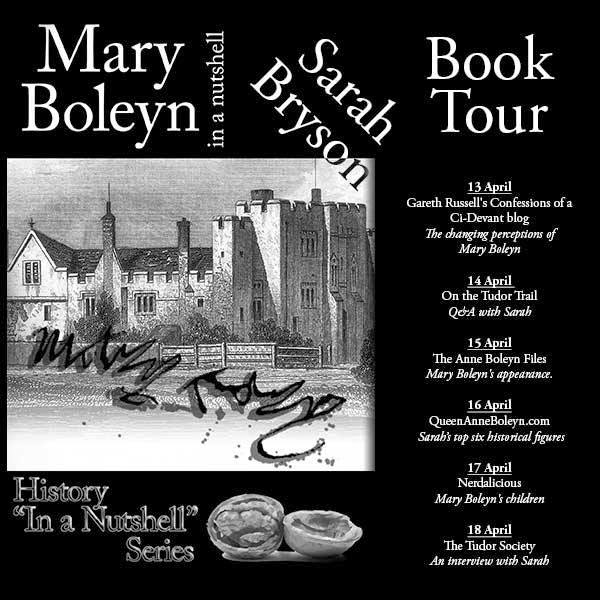 I am delighted to host a guest article from writer Sarah Bryson, who has just published her new book Mary Boleyn, a biography of Elizabeth I's longest-surviving aunt. The book has been released by Made Global, as part of their "In a Nutshell" series that provides short but thorough accounts of historical people, issues, and phenomenon (Claire Ridgway's instalment on the horror of the "sweating sickness" strain of plague in early modern England inaugurated the series.)

As part of promoting her book, Sarah has stopped by to Confessions of a Ci-Devant with an article on changing perceptions of Mary Boleyn, who died in 1543, fifteen years before her niece succeeded to the throne and seven years after her younger sister lost her head in such hideous and murky circumstances. We are also giving away a copy of Sarah's book, with a question to be answered at the end of this article.

With that, over to Sarah!

The Changing Perceptions of Mary Boleyn by Sarah Bryson


Mary Boleyn has gained quite a reputation for herself over the years - mistress of kings, whore, schemer, giddy girl with little intelligence, a fierce rival to her sister... Yet upon what are all of these perceptions based?

When first beginning my research on Mary Boleyn I was bombarded with modern day perceptions of the woman. but I wanted to wade through these to find out what the true Mary Boleyn was like. Unfortunately during her lifetime there seems to have been very little written about her personality, let alone her thoughts, feelings and beliefs.

Mary is described by Antonia Fraser in her book The Six Wives of Henry VIII as “a high spirited, rather giddy girl who enjoyed all the pleasures of the court on offer” (Fraser 1992, p. 124), yet when I looked up where exactly Fraser had gained this information about Mary Boleyn’s personality I could not find a single source. David Starkey in his book Six Wives: The Queens of Henry VIII describes Mary as “a placid and unremarkable girl. But she was very attractive to men, and found them irresistible too – or, at least, her resistance never seems to have lasted long” (Starkey 2004, p. 258). Once more when I tried to find out where Starkey had gained this information there was no source provided. So why is this perception of Mary Boleyn taken for granted?

First and foremost, it does not seem that during most of her life Mary Boleyn was ever considered to be a whore. She was acknowledged as King Henry VIII’s mistress from around 1522 to approximately 1525 and yet there were no recorded whispers or conversations about the young woman being a whore. In fact, there were families at the time, including the Boleyns, Howards and Seymours who openly pushed their female family members before the king in hopes of gaining his attention. It was hoped that through the woman’s relationship with the king the woman might have some influence in helping to further elevate other members of the family. Instead of being considered as a whore for sleeping with the king, it was often seen as quite beneficial and as a means of progressing members of the family.

It seems that the rumours and thoughts of Mary Boleyn being a whore came into play around the time that Anne Boleyn fell from power and was executed. Rodolfo Pio, Bishop of Faenza wrote a letter on March 10th 1536 stating that:

“Francis said also that they are committing more follies than ever in England, and are saying and printing all the ill they can against the Pope and the Church; that “that woman” pretended to have miscarried of a son, not being really with child, and, to keep up the deceit, would allow no one to attend on her but her sister, whom the French king knew here in France ‘per una grandissima ribalda et infame sopre tutte.’” - “a great prostitute and infamous above all”. (L&P x. 450)

The first thing that should be pointed out about this letter is that it was written with the sole purpose of discrediting Anne Boleyn during her final months. Pio writes that ‘that woman’ (Anne Boleyn) pretended to have miscarried a son. First and foremost, we know that Anne Boleyn did in fact miscarry a male foetus of approximately three and a half months in gestation on 29 January 1536. Secondly, it should be noted that he writes that Anne would let no one attend her but her sister. Mary Boleyn was banished from court in 1534 for not only marrying beneath her status but also for marrying without her sister and the king’s permission, and not to mention for being pregnant at the time. With two blatantly incorrect pieces of information written in this letter how can we believe what Pio is writing when he himself is getting the facts wrong?

In reference to the French King ‘knowing’ Mary Boleyn in France and referring to her as a great prostitute, how did he know her? Did he know of her, as he was aware of her presence at the French Court, or had he physically known her? The word opens up a Pandora’s box of interpretation. Was the French king assuming she was a prostitute or did he know that for a fact? Was the French king even telling the truth? It may have been that twenty years after Mary was at the French court the king was simply boasting about a woman he barely remembered. This letter, riddled with falsehoods, does not provide enough evidence to suggest that Mary Boleyn even had any relationship with the Francis I,  let alone having been his mistress or whore!

Unfortunately, it seems that this perception of Mary Boleyn has filtered into modern portrayals of the woman. In the TV show The Tudors Mary is portrayed as a slightly dim-witted, giddy young woman, who loved all the excitement at court and who caught the attention of Henry VIII and was used until he grew tired of her. There is little more story development regarding her except that she appeared at court pregnant and her sister was disgusted and banished her. These perceptions of Mary seem to be based upon so-called facts which have little or no evidence to back them up.

The television mini-series Wolf Hall has done very little to help portray Mary Boleyn in a positive light either and has seemed to grasp these negative perceptions of Mary with both hands. Mary is shown as being quite rude and as having a fierce rivalry with her sister Anne. Then, quite shockingly, she is shown on more than one occasion trying to seduce Thomas Cromwell! There is not a shred of evidence to suggest that Mary Boleyn had any interest in Cromwell, never mind her trying to actively pursue or seduce him. This addition into the series only added to the perception that Mary Boleyn had loose morals and that she used her sexual appeal and persuasion to get what she wanted.

The movie The Other Boleyn Girl, based on Philippa Gregory’s novel, did a slightly better job at portraying Mary Boleyn. Played by the stunning Scarlett Johansson, Mary was shown as a woman with thoughts, feelings and desires. Instead of a one-dimensional character, she was shown to care about those around her, including her sister Anne. The movie does portray a strong rivalry between the sisters, although much of that comes from Anne Boleyn’s desire to attract Henry VIII’s attention for herself, or as it seems to ‘steal’ Henry from Mary.

There is no evidence at all to suggest any sort of rivalry between Mary and Anne.  In fact, after her banishment from court, Mary wrote to Thomas Cromwell, right hand man of Henry VIII, asking for his assistance to “recover the king’s gracious favour and the queen’s”. Mary also wrote that “her grace is so highly displeased with us both that without the king be so good lord to us as to withdraw his rigour and sue for us we are never likely to recover her grace’s favour: which is too heavy to bear” (Howard, A Collection of Letters, p. 525-257). Clearly Mary is upset that she has lost the favour and love of her sister, so why are the sisters portrayed in modern media as having such a fierce rivalry?

When there was so little recorded about what Mary Boleyn was truly like, why has such a negative perception of her developed over the centuries?  In modern times, she has become a woman often shown as having loose morals, using her sexual charms to gain what she wants, having a fierce rivalry with her sister Anne and more often than not being rather unintelligent. I wonder where these changing perceptions of Mary have come from and more importantly why? Have these ideas of Mary Boleyn grown out of misconceptions and not checking facts correctly? Or have they simply been generated to create a better story for modern viewers? If so, then I would argue that is a great shame as when all the false perceptions are stripped away Mary Boleyn is a fascinating woman. She travelled to France at just fourteen years of age, became a mistress to King Henry VIII, had two healthy children and defied all the social rules of the time and married for love. This is a far better story than that of a dim-witted whore!

Win a copy of Mary Boleyn by Sarah Bryson

To win, simply answer the question below by leaving your answer and contact e-mail address in the comments section. Neither will be published, but instead they'll be used in a random generator to pick a winner from all those who get the answer correct!

Question: What was the Christian name of Mary Boleyn's mother?