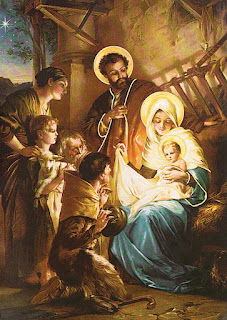 Whilst it's famously called "the most wonderful time of the year," Christmas can also be a difficult time for people. It can bring up painful memories of those no longer with us. Unfortunately, it can also add a great burden to those struggling either emotionally or financially. More often, though, Christmas is a combination of both sad and happy feelings, particularly as we get older, which reminded me of a lovely anecdote about the first Christmas. The story is told in an early Christian text, The Infancy Gospel of James, one of the earliest of the biographical hagiographies inspired by Christianity's leading figures.
"And Joseph  saddled the ass, and set her upon it; and his son led it, and Joseph followed. And when they had come within three miles, Joseph turned and saw her sorrowful; and he said to himself: Likely that which is in her distresses her. And again Joseph turned and saw her laughing. And he said to her: Mary, how is it that I see in thy face at one time laughter, at another sorrow? And Mary said unto Joseph: Because I see two peoples with my eyes; the one weeping and lamenting, and the other rejoicing and exulting."
I hope everyone reading has a safe and blessed Christmas. And thank you so very much for reading Confessions of a Ci-Devant throughout 2011.
Posted by Gareth Russell at 21:31