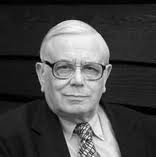 Meeting people who are gifted, bright and talented is always a pleasure and one I had always wanted to hear was Eric Ives - or Professor Eric William Ives, O.B.E., Emeritus Professor of History at the University of Birmingham. Eric Ives was a giant of Tudor history; his work included a short biography of Henry VIII, a political study of Lady Jane Grey's time as queen, a study of how faction influenced government in the 1500s, several studies of legal history in the sixteenth century, forensic examinations of Henry VIII's last will and testament, studies of courtiers in Anne Boleyn's circle and a co-written study of the history of Birmingham's university. His last book, The Reformation Experience, was an examination of what it was like to live through the Reformation and, unlike many works written today, it was marginally more sympathetic to the Protestant community. (Ives was, himself, a devout Christian.)

However, it was for his work on Henry VIII's second wife, Anne Boleyn, that Eric Ives was best known. He first became interested in her when he was writing about the career of Sir William Brereton, a sixteenth century networking politico who was executed in 1536 for being Anne's adulterous lover. Ives' research into Brereton showed that it was practically impossible that Brereton was ever romantically involved with the queen, which led to the question of why he died for that crime. The result was a seven year academic investigation into Anne's life, which produced the acclaimed biography Anne Boleyn, in 1986. Reflecting on it later, Ives said, "I have sometimes described Anne Boleyn as the third woman in my life, after my immediate family, and it is true that once she interests you, fascination grows, as it did for men at the time". 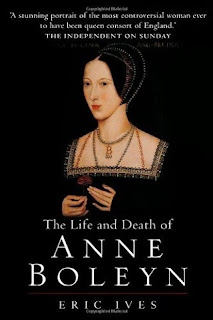 Anne Boleyn rapidly became seen as a kind of bible by Tudor history aficionados and the standard text on Anne Boleyn's life and historical importance. There were detractors, of course - and Ives ended up in a ferocious academic spat with Professor George Bernard and with Professor Retha Warnicke. Warnicke rebutted with her book, The Rise and Fall of Anne Boleyn: Family politics at the court of Henry VIII, published in Cambridge (Ives was published in Oxford) in 1989. She argued that Ives's account of Anne's death was too political and that Anne had been the victim of sixteenth century gender prejudices, stirred up by the disastrous end to her final pregnancy. Even less convincingly was Bernard's rejoinder, Anne Boleyn: Fatal attractions, published by Yale in 2010, which argued that Ives was wrong to see Anne as innocent, because she must have done something wrong for Henry VIII to treat her so badly. (See my review of Bernard's book, here.) In 2004, Ives re-issued and re-updated his original book on Anne, producing The Life and Death of Anne Boleyn: The Most Happy. He revised some of his original findings, but stuck to his conclusion that Anne was "the most influential and important queen consort this country has ever had. Indeed, Anne deserves to be a feminist icon, a woman in a society which was, above all else, male-dominated, who broke through the glass ceiling by sheer character and initiative." Whether one agree with Ives or not, his biography of Anne was so comprehensive that it became the standard reference point on any and all subject pertaining to Anne Boleyn and the politics of the 1520s - her date of birth, her childhood education, the lives of her parents and siblings,  the nature of her early romantic relationships, the reliability of Catholic sources against her, the chronology of Henry VIII's obsession with her, her personality, the downfall of Cardinal Wolsey, factional politics, the rise of Thomas Cromwell, the Break with Rome, which (if any) of her portraits were authentic, her appearance, the date of her marriage, the nature of her married life, her political influence, her charity, her wealth, her artistic patronage, her ladies in waiting, her influence on the church, her sense of Christianity, foreign policy in her lifetime and, above all, why she ended her life in such a tragic and bloody way.

So, when I was invited to speak and co-host the 2012 Anne Boleyn Experience, a luxury holiday operated by History Tours of Great Britain, I was very, very excited to hear that one of the other speakers would be Eric Ives. I gave my talk on life in the queen's household on the Monday and Professor Ives was due to speak on the Tuesday, about Anne's downfall in 1536 and who was to blame. (It was Ives's controversial theory that Thomas Cromwell had far more to do with it than Henry himself and that Cromwell essentially framed Anne in order to stop her from ending his career.) It was therefore a surreal, and tragic, experience to be sitting in Anne Boleyn's family home when I heard the news that a man who had devoted decades of his life to studying her had passed away at the age of eighty-one.

Eric Ives was an erudite, thorough and brilliant historian. His mind was as sharp as his writing and he helped keep history interesting, whilst also dismissing many of its sillier legends. Apart from the Tudor court, his other interests included the history of law and the development of higher education in Britain. He nurtured and supervised many of the best minds in the next generation of historians and in 2001, he was made a member of the Order of the British Empire by Her Majesty the Queen, in recognition for his services to history. A regular contributor to the BBC History Magazine and History Today, Professor Ives had sadly lost his wife, Ruth, a few years ago; he is survived by his daughter, Susan, and his son, John.

Ives's passing has been greatly regretted by his colleagues. Dr. Suzannah Lipscomb, author of the book 1536, said, "Professor Eric Ives's death is a sudden and profound loss to the historical community. He was a brilliant historian and one of the leading lights of Tudor history: his work on Anne Boleyn and Lady Jane Grey is unsurpassed (and I say this even as one who disagreed with him on some points of interpretation!). It is deeply sad that The Reformation Experience will be his last book. But, even more importantly, he is also an exceptionally warm, kind, generous and courteous man. He will be greatly missed."

I never did get to hear Eric Ives speak, but I have his books and his wonderful, clever, written words.
Posted by Gareth Russell at 16:21