The Black Dinner and the Rains of Castamere 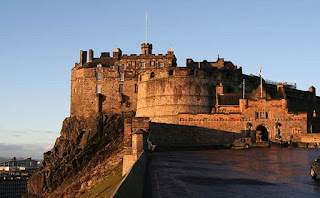 PLEASE do not read this if you are currently reading A Song of Ice and Fire novels by George R.R. Martin or if you're watching the television version of the series, Game of Thrones, by HBO. This article contains spoilers, by discussing the alleged real-life inspiration for the event known as "the Red Wedding."

I am currently writing a history of the British monarchy which will be out later this year. Luckily, it's been split into two volumes and volume one, And the Sword Gleamed, will be available soon. The book is predominantly Anglocentric due to time and space constrictions, but where possible I am doing my best to discuss the monarchies in Scotland, Ireland and Wales, too. (I'd love one day to go back and to tell the story of their monarchies in another book.) One of the things that has struck me so much as I'm researching it is how brilliantly George R.R. Martin has been inspired by European medieval history in writing his epic fantasy series, A Song of Ice and Fire. On the one hand, this is shown in his immaculate recreation of aristocratic culture - similar names, sigils, rivalry, treachery, arranged marriages, wardships and concepts of honour. In other ways, it's by more specific nods - like the comet that trails across the sky, seen by many as a good omen for the exiled princess Daenerys Targaryen, so similar to the comet that flew over England in 1066 before the arrival from beyond the sea of William the Conqueror.

One of the series' most infamous moments is the so-called "Red Wedding," in which Robb Stark, one of the combatants in the novels' central conflict, the War of the Five Kings, is lured into a trap by an erstwhile ally, Lord Frey, when an arranged marriage designed to seal the peace between the houses sees Frey betray Robb Stark by butchering him, his mother Catelyn and thousands of their followers while they are under his hospitality at a wedding banquet. The Starks were an aristocratic clan who, under Robb, had become so sickened by the capricious incompetence and cruelty of the boy-king Joffrey that they had developed secessionist ambitions, hoping to forcibly remove the north from the kingdom of Westeros and re-establish independent monarchy in the region. Joffrey's maternal grandfather, Lord Tywin Lannister, a man of inexhaustible wealth and equally inexhaustible cruelty, liaises with the Freys and ends the Starks' mission by orchestrating a bloody massacre that has left fans of both book and TV show reeling, particularly after the incident was so brilliantly dramatized this week in the penultimate episode of season 3, The Rains of Castamere. 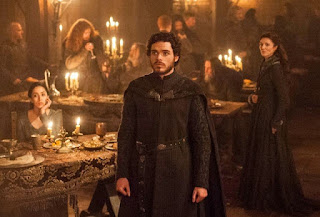 Oona Chaplin, Richard Madden and Michelle Fairley as members of the Stark family in "The Rains of Castamere"

The parallels between the fictitious Red Wedding and the real-life Black Dinner are fairly clear, although Westeros's Wedding has been augmented by Martin's great skills as a writer. In a recent interview with  EW, Martin stated that two events in Scottish history - the Black Dinner and the Glencoe Massacre - had inspired him to write of the Red Wedding in which Robb and Catelyn Stark lose their lives.

In 1440, Scotland was ruled over by the ten year-old King James II and those around him struggled to see who could rule in his name. His father, King James I, had been stabbed to death in a plot led by his uncle and former ally, the treacherous Earl of Atholl, three years earlier. The young king's English mother, Queen Joanne (left; sometimes given as "Queen Joan"), had been wounded in the attack but had managed to escape back to Edinburgh, where she had managed to hold onto power for herself and her son. As an English aristocrat, Joanne's rule was not popular in Scotland and to bolster her political strength she allied herself to a man with the magnificently Westeros-sounding nickname of "the Black Knight of Lorn," whom she eventually married. In 1439, she had lost power and been replaced in government by her enemies.  By 1440, disagreements over the legacy of the queen-regent, the death of some of her strongest allies, the political fallout of the old king's assassination and out-of-control aristocratic infighting had all produced a fraught and dangerous political environment in which paranoia, dishonesty and violence were the dominant themes.

One clan in particular who frightened the new regency government was the Douglas clan. Their late head, Archibald Douglas, had been a political ally of the queen mother's but after his death, she had fallen from power and the young king was now ruled by her enemies, Sir William Crichton, Sir Alexander Livingston and the earl of Avondale. By 1440, with the queen mother having been placed under house arrest, there were fears that Clan Douglas were preparing to seize more power for themselves and oust the triumvirate who were controlling the young James II. After Archibald Douglas's death, the new earl and head of the Douglas family was his 16 year-old son William, an age not too dissimilar to that of Robb Stark in the series. The royal household issued an invitation to the earl and his younger brother, 11 year-old David, to join the king at a banquet in Edinburgh Castle. As in Game of Thrones, the laws of hospitality in medieval Scotland were regarded as inviolable. The king's peace was an even more sacred concept and so the Douglas brothers attended the feast, safe in the knowledge that no self-respecting Christian or aristocrat could possibly besmirch his honour by harming them under those circumstances. At the climax, the regency's servants presented him with a dish covered in a white sheet. When the earl removed the sheet, he saw they had served him a black boar's head. It was a symbol of death and the musicians begin to beat on a single drum as William and his 11 year-old brother were dragged from the king's presence and executed on the castle's hill. Their sister, the beautiful Margaret, known as the Fair Maid of Galloway, was not present and did everything she subsequently could to rebuild the family's prestige. 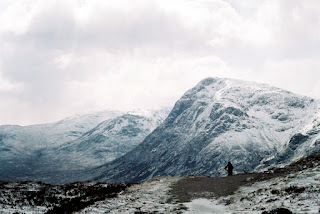 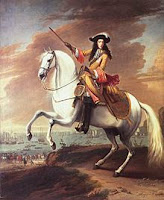 A later event which Martin cited as inspiration for the Red Wedding was the Glencoe (above) Massacre of 1692. Two years earlier, the Battle of the Boyne in Ireland had seen the triumph of the Protestant Dutch prince, William of Orange (left), who had seized the British throne as William III, deposing his Catholic uncle, King James, in the process. The decision over which monarch to back had split many of the clans of the Highlands. On the one hand, William was a Protestant - the majority religion in Scotland by the seventeenth century; on the other hand, James was ancestrally Scottish and carried the name of the House of Stuart who had ruled over Scotland for centuries. The Campbell clan, who sided with William, saw his victory as the perfect opportunity to extirpate their rivals in the Highlands, Clan MacDonald, who had initially remained loyal to James. Forces loyal to the Campbells arrived in the Highlands, ostensibly on a mission to collect taxes for the Scottish parliament. Seeking shelter with the MacDonalds, the Campbells' men rose up one night and slaughtered thirty-eight of the MacDonalds, even stabbing some of them in their beds. Forty women and children subsequently died from exposure in the Highland winters after the vindictive Campbells burned their homes to the ground and evicted them. It had been a slaughter under trust and in violation of the hospitality that had been offered to them by the MacDonalds, who clearly placed the ancient customs of shelter and aristocratic protocol over the feud which the Campbells would use as an excuse to slaughter them. To this day, there are pubs in Scotland that deny the right of any member of a Campbell family to cross their threshold and groups as disparate as neo-Jacobite royalist movements and the Scottish Republican Socialist Movement still annually commemorate the massacre.

As Martin said to fan backlash about the savagery of the Red Wedding in Westeros: "No matter how much I make up, there's stuff in history that's just as bad, or worse."