Was Anne Boleyn a feminist?: A guest post from author Susan Bordo

Today, I am absolutely delighted to welcome Susan Bordo to Confessions of a Ci-Devant. Susan's recent book The Creation of Anne Boleyn is a phenomenally good read for those interested in Anne Boleyn, history, feminism, popular culture, literature or acting. I enjoyed it thoroughly and you can check out my review of it here, if you're interested. If anyone is interested in purchasing a copy for themselves, it's available via Amazon. Susan's guest article for this blog is called Was Anne Boleyn a feminist?, and it's based on the research she undertook for The Creation of Anne Boleyn. Thank you to Susan for this article and I hope everyone enjoys it!

Was Anne Boleyn a feminist?

“Feminist”...Has any other word been so mocked, misdirected and mutilated? For some, it’s just a hand-grenade to lob at uppity women.  At the other end of things are the historical purists who refuse to grant the name of “feminist” to anyone born before the word was coined (in France and The Netherlands in 1872, Great Britain in the 1890s, and the United States in 1910.) In between these extremes are definitions both commonsensical and eccentric, and generations of women (and some men) proudly identifying or nervously/defiantly disowning the label. Given its irritating and ill-informed history, it’s tempting to simply throw it out. But, like all culturally charged terms, it’s impossible to “simply” throw it out—for throwing it out will inevitably be taken as a statement in itself.

So I will take it head on:  Was Anne Boleyn a feminist?

Well, no—not if by “feminist” you mean someone with an articulated position on any issues involving women’s “rights” (a concept that had no meaning in Anne’s time), the natural equality of women and men (a concept that had been much debated since Christine de Pizan introduced the Querelle des Femmes—or “Woman Question”--in the 15th century), or the value of education for women (also a hot topic for those engaged in the Querelle.) There is no evidence that Anne held a position on any of these issues—unlike, for example, Marguerite de Navarre, Francis I’s sister, whose Heptameron vividly protests the sexual “double standard” that allowed male aggression free rein while condemning women who stepped out of line.  Anne spent most of her adolescence at Francis’s court, and seems to have shared or absorbed Marguerite’s evangelical stance on reform of the church, which Anne very publicly advocated.  But Margeurite’s “feminism”?  If Anne held views on the virtues of women or their natural equality with men, she either didn’t make them public or they have been lost to us, along with everything else destroyed by Henry’s ruthless purge of all evidence of Anne’s existence, as he made plans for his marriage to Jane Seymour.

On the other hand, if we loosen up a bit on the quest for a rigorously defensible answer, and allow our minds to play with the question, there is intriguing—although fragmentary and subtle—support for the notion that Anne may have had a more “political” understanding of what we would today call the “gender rules” than the wives that preceded and followed her. At her trial, insisting that she was “clear of all the offences which you have laid to my charge,” she went on to acknowledge, not only her “jealous fancies” but her failure to show the King “that humility which his goodness to me, and the honours to which he raised me, merited.”[1]  She stood accused of adultery and treason.  Yet she did not simply refute those charges; she admitted to a different “crime”:  not remaining in her proper “place.”  In juxtaposing these two, Anne seems to be suggesting that not only did she recognize that she had transgressed against the norms of wifely behavior, but that this transgression was somehow related to the grim situation she now found herself in. 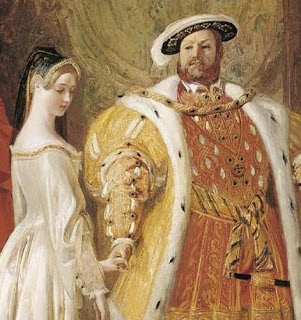 She was undoubtedly right about this. Spontaneous and intense in an era when women were supposed to silently provide a pleasing backdrop for men’s adventures, Anne had never “stayed in her place”— which was exciting in a mistress, but a PR problem in a wife.  We know from her actions that Anne was not content to flirt with power through womanly wiles and pillow-talk.  She was a player.  An avid reader of the radical religious works of the day (many of them banned from England and smuggled in for her), her surviving library of books includes a large selection of early French evangelical works, as well as Tyndale’s English-language New Testament (which was to become the basis for the King James Bible), which she had read to her ladies at court.  She introduced Henry both to Tyndale’s anti-papal “The Obedience of a Christian Man” and probably also Simon Fish’s “Supplication for the Beggars.”  She advocated for the cause of the English-language bible. She secured the appointment of several evangelical bishops and deans when Henry created the newly independent Church of England.  She attempted to intervene on behalf of reformists imprisoned for their religious beliefs.

The promotion and protection of the cause of reform was a dangerous business for Anne to engage in, because it was such a divisive issue (to put it mildly) and men’s careers (and sometimes heads) would hang or fall depending on which side was winning.  Anne’s took a risk in showing Tyndale and Fish to Henry, but it was one that initially paid off, as he immediately saw that they were on the side of Kings rather than Rome when it came to earthly authority. But even if Henry had no objection to Anne’s tutelage, others did, and their objections were a potent mix of misogyny and anti-Protestant fervor.  Much of the gossip that circulated around court and through Europe came from the tongues (and pens) of those for whom to be anti-papal was to be pro-devil.  “Lutheran” women (an incorrect appellation for Anne, who did not subscribe to Lutheran doctrine) enraged Catholic dogmatists, who were quick to accuse them of witchcraft—an old charge against “talkative,” impertinent women which was particularly handy when the women were “heretics.” From “heretic” to “witch” was a short step, and from “witch” to “insatiable carnal lust” and “consorting with the devil” took barely a breath.[2] The same year that Anne was executed, an effigy of evangelical Marguerite de Navarre, on a horse drawn by devils wearing placards bearing Luther’s name, appeared during a masquerade in Notre Dame.[3]

Anne’s involvement (read: interference) in the political and religious struggles of the day was a continual annoyance to her enemies, who saw her as the mastermind behind every evil that properly should have been laid at Henry’s feet, from the destruction of Wolsey and More to the harsh treatment of Katherine and Mary. Spanish ambassador Eustace Chapuys, whose venomous, gossipy letters home have formed the basis for much of our “knowledge” of Anne, called her a “whore” and charged her as a would-be poisoner of Katherine and Mary and vicious corrupter of otherwise sweet-tempered King Hal.  He also inflated her contribution to the “scourge of Lutheranism” to unbelievable proportions.  In one letter to Charles, Chapuys went so far as to blame “the heretical doctrines and practices of the concubine” as “the principal cause of the spread of Lutheranism in this country.”[4]

It was preposterous, and Henry certainly didn’t believe it.   But it created a political/religious “wing” of anti-Anne sentiment that could be exploited by Cromwell when he turned against Anne, and was a powerful obstacle in the way of Anne’s acceptance by the (still largely Catholic) English people.  In gaining that acceptance—and with it some protection from the winds of shifting politics—Anne already had several strikes against her.  She had supplanted a beloved queen.  She was rumored to be “haughty” and suspiciously “French”--and even worse than that, a vocal, intellectual, “interfering” woman.  Jane Seymour, when she entered the picture in 1536, was no less the “other woman” than Anne was (and probably more deserving of the charge of using her virginity as bait than Anne was), but her apparent docility miraculously spared her, when she became queen, from the antipathy that Anne inspired. Although later historians would question just how placid Jane actually was, in her own time she was constantly commended for her gentleness, compassion, and submissiveness, which she advertised in her own motto: “Bound to obey and serve.” With few exceptions, the stereotype has not lost its grip on popular culture.

With Anne it was quite the opposite. Even those who shared her religious views, like Cromwell, had no scruples about spreading nasty rumors when it suited their purposes. For Anne’s reputation as a woman who simply would not behave as she should had created an atmosphere that did not incline men to be her protectors, but rather freed them to take the gloves off when fighting with her. “Had she been gracious and modest,” writes 19th century commentator James Froude, “she might have partially overcome the prejudice against her.”[5] “Gracious and modest” seem like laudable qualities.  But what they meant in the context of the times and why Anne could never play the part is laid bare by David Loades: “Anne…could not pretend to be a fool or a nonentity, and the self-effacement customary in a royal consort did not suit her style at all…In many ways her sharpness of perception and readiness of wit made her more suitable for the council chamber than for the boudoir.”[6]

But women did not belong in the council chamber.  Here’s Natalie Dormer, who played Anne in Showtimes’ The Tudors (below) and with whom I discussed Anne in an lengthy interview, on this issue:

"Anne was that rare phenomenon, a self-made woman. But then, this became her demise. The machinations of court were an absolute minefield for women. And she was a challenging personality, who wouldn't be quiet and shut up when she had something to say. This was a woman who wasn’t raised in the English court, but in the Hapsburg and French courts. And she was quite a fiery woman and incredibly intelligent. So she stood out—fire and intelligence and boldness—in comparison to the English roses that were flopping around court. And Henry noticed that. So all the reasons that attracted [Henry] to her, and made her queen and a mother, were all the things that then undermined her position. What she had that was so unique for a woman at that time was also her undoing.”[7] 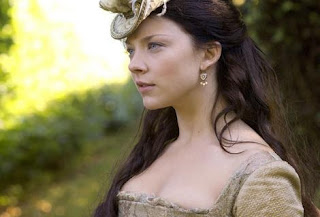 To describe Anne Boleyn as a feminist would be an anachronism—and not nearly as appropriate an anachronism in her case as in that of Marguerite de Navarre and others who openly championed for female equality.  Marguerite did not have the word, but she was conscious of a women’s “cause.”  There’s no evidence that Anne felt similarly.  But she had learned to value her body and her ideas, and ultimately recognized that there was something unsettling about this to Henry, understood that this played a role in her downfall.  “I do not say I have always shown him that humility,” she said at her trial, insistent even then on speaking what she believed.[8]  Anne wasn’t a feminist.  But she did step over the ever-moving line that marked the boundary of the comfort zone for men of her era, and for all the unease and backlash she inspired, she may as well have been one.