The ghosts of Versailles

This December, I have been working on a revival of my play The Gate of the Year, the storyline of which is based on the outbreak of the French Revolution. Beginning with the final Christmas at Versailles in 1788 and moving on to three weeks after the fall of the Bastille in 1789, the play updates to the story to a modern setting - although, with its preoccupation with gender, status and etiquette, it's not quite modern in the way we would identify it. Cailum Carragher, who plays the Minister of Police, describes it as adrift "in time and place" - a far more lovely way to put it, I suppose.

Lifting characters who lived and died in the fading decades of the eighteenth century to set them adrift in the choppy currents of an imagined twentieth was not, strange to say, a particularly difficult process, but it was fascinating. I think I shall leave them, temporarily, with great reluctance. They have a way of settling under your skin, by leaping out to you across the centuries - they are so vivid, so relatable, I think, even in their oddity. There is something tangible about them; it's hard not to feel drawn toward them. Stephanie Dale, who plays Marie-Antoinette, and who has recently finished filming for the BBC series The Sparticle Mystery, reflects, "I am sympathetic towards her because of what she has had to endure emotionally. Growing up, her life was supposed to have been perfect and she had a terrible time with the press. One of my favourite lines is 'it was not a complete pleasure to live out the greatest fairy tale of the century.' Marie Antoinette has been hurt by publicity and she knew what people expected of her and her marriage, but she is also extremely strong for having the ability to endure it. The amount she takes on emotionally and physically in the course of this play is quite extensive and for this reason I admire her." As Marie-Antoinette hurtles towards a fate she would never have chosen for herself there is, to me anyway, something magnificent about the way she decides "not to go quietly into the night." In Stephanie's words, "She has chosen her destiny and chosen to take action which is an extremely admirable part of her personality."

Mercedes Sharma, who plays another female icon of the revolutionary era, liberal republicanism's "angel of assassination" Charlotte Corday, is another actress playing someone who goes down the rabbit hole as the Revolution engulfs them all. Throughout the rehearsal process, Mercedes has always maintained that her character is one of the most identifiable for modern audiences. "Having gotten to know the characters I still think they are the most relatable," she says. "I believe that convincing yourself that things happen for the greater good (something that Marat does throughout) is part of human nature. Charlotte is like all young people with a passion for something, her passion and dreams just happen to turn into her own personal living hell."

In this re-imagined world of The Gate of the Year, Corday actually knows her victim, Jean-Paul Marat, in a friendship where her idealism contrasts with his hard-nosed, brutal pragmatism. However, Mercedes is more ambivalent about Charlotte Corday than the real Corday's nineteenth century admirers were. She's not so sure that anyone emerges from the revolutionary period completely untainted: "At the start of the play I think Charlotte's willingness to throw herself into the revolutionary world, whether she truly understands what she is getting into or not, almost inspires Marat to become the monster we know him to be by the end. Both need each others' approval but in all honesty I don't think either of them realise that until it tears them apart."

Grappling with personal and moral ambiguities is what makes this story so appealing to me as a writer and Tom Flight, who returns to the role of France's doomed King Louis XVI articulates this well when reflecting on his character's dire reputation as a failed monarch who helped grease the slippery slope to chaos. "I think the reason why he is often thought of as weak and pathetic is because Louis suffered from incredible self-doubt in his ability to rule which lead to uncertainty in decision making. This makes Louis easy to mock as it goes against the traditional ideas of a strong monarch. But in The Gate of the Year, you see the complexity of the decisions that Louis faced and how he was caught between the deep-seated traditions of the Aristocracy and the blazing rage of the revolutionaries. One of my favourite lines in the play is when Marie-Antoinette says of Louis “He chose being kind over being good.” Louis tried until the end to do the right thing, but the consequences of his decisions were horrific. I actually believe Louis was a better King than most. But," he concedes, "he was perhaps the wrong monarch at the wrong time."

Both Stephanie and Tom interpreted the marriage of Louis XVI and Marie-Antoinette much more favourably than most portrayals of them. Marie-Antoinette has been played on screen by actresses like Norma Shearer (who was nominated for an Oscar for the role in 1938), Jane Seymour, Joely Richardson, Kirsten Dunst and Diane Kruger, but in many, particularly in the 1938 role, Louis is played as a kind-hearted dunce, almost a caricature. Stephanie sees Marie-Antoinette as "unquestionably faithful" to her husband (rumours dogged the Queen, then and later, that she had an affair with the handsome Swedish soldier, Count Axel von Fersen, but I agree with writers like Jonathan Beckman and Elena Maria Vidal that there is no evidence to support that she was ever unfaithful to her husband). Of their marriage, Tom, who read the historian Vincent Cronin's account of the royal marriage, reflects, "I believe they loved each other unquestionably. Through being forced into a politically motivated arranged marriage a unique bond between them was formed. Louis also never had mistresses (unlike many of his predecessors) and his faithfulness shows a commitment and devotion to the marriage that was rare in Versailles. I believe their marriage was a happy and loving one, and Stephanie Dale’s wonderful performance as Marie-Antoinette sublimely captures the shock and torment as the fairy-tale turns into a nightmare."

The story of the fall of the French monarchy is a grand political drama and a complex series of personal tragedies and triumphs. Tom Flight's favourite moment in the play takes place as the monarchy enters its endgame. "My favourite moment to perform is Act II, Scene VIII (photo below) between Louis and [his younger brother] Charles, performed by the outstanding David Paulin," he told me. "An empire has fallen, but in this scene the emotions of the situation are played out in a sibling squabble. I believe Louis always felt in the shadow of his younger brother, even that he was perhaps more suited to being King, and it is quite heart-breaking the way he admits his failure to his brother. Charles also has bitter regret he couldn’t do more for his country which, in part, was due to Louis’s decisions, and he can’t help but kick Louis while he’s at his lowest. But the scene remains a moment between two brothers. Despite the violent anger and high emotion neither can get away from the indelible nature of family and brotherhood." 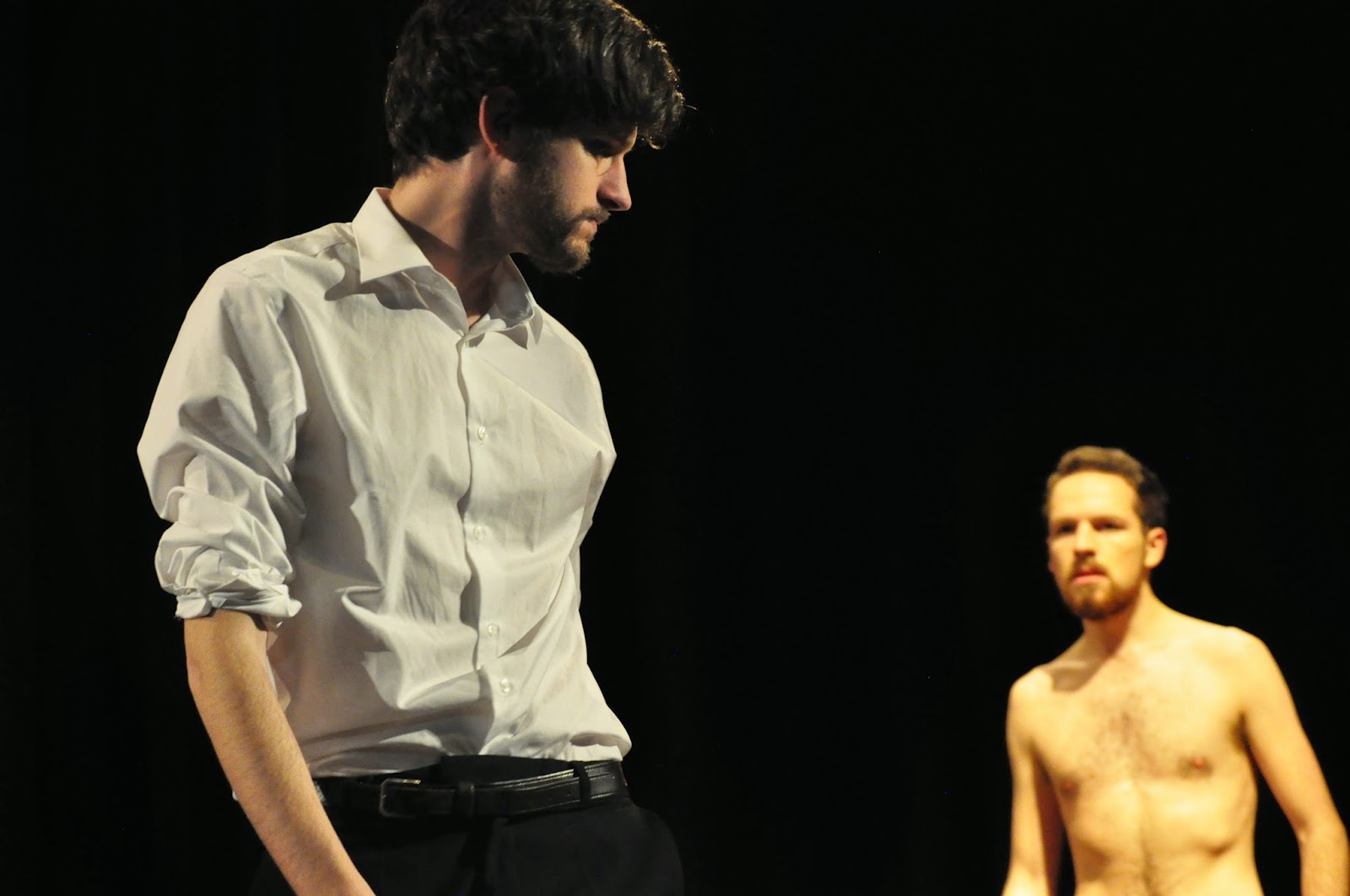 Shimmering just beyond our reach, the "crucible of our modernity", the ghosts of Versailles, those who lived in it and those who destroyed it, present an eerily modern set of possibilities to depict, not so much a world in its twilight, as a timeless tale of human greatness, weakness, cruelty, wisdom, folly and hope.
Photographs by Ella McMaster.
Posted by Gareth Russell at 12:49