Adrienne Dillard reviews a new biography of Charles I 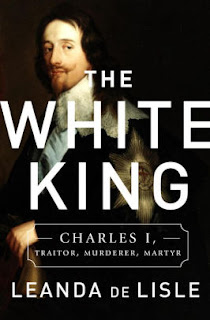 Leanda de Lisle's first book, After Elizabeth, was a fascinating account of the dying days of the Tudor dynasty and the subsequent transfer of power to the Scottish ruling house. Now, after best-selling accounts of the Grey and Tudor families, de Lisle has returned to the Stuarts, with a biography of King Charles I, the autocratic monarch whose reign ended in civil war, his execution, and the temporary abolition of the British monarchy. With new research from previously unused private documents and a focus on Charles's marriage to the unpopular French princess, Henrietta Maria, this biography is already garnering interest and applause amongst fans of royal and political biographies.

The White King is released today in the United States and it is available through Amazon and Barnes & Noble. Its British release date is on 11th January. I am delighted to host this review of The White King by American novelist Adrienne Dillard, who is the author of two novels set at the Tudor court - Cor Rotto, inspired by the life of Elizabeth I's cousin, Katherine Carey, and The Raven's Widow, based on the life of Catherine Howard's confidante Jane, Lady Rochford.

As a Tudor historian, it is nearly impossible to review works set during the time period without seeing the content through the jaundiced lens of your own biases.  More often than not, there is room for multiple interpretations of the documented evidence, but it can be hard to overcome the instinctual gut-reaction humans experience when faced with an opinion that differs from one they wholeheartedly embrace about historical figures they have come to cherish.  That uncomfortableness is invaluable when we seek academic growth, but it makes reading for pleasure a challenge.  Thankfully, I had few preconceived notions about England’s first Caroline king, and when I was offered the opportunity to review the latest take on his life, I leapt at the chance.  Few things can compare to the joy I feel when introduced to a new historical subject and this beautifully crafted biography did not disappoint.

The subtitle of Leanda De Lisle’s The White King calls the monarch a traitor, murderer, and martyr, but upon completion of the book, I have come away with the impression that the only fitting descriptor used is martyr.  The other titles seem far too subjective for this oft-misunderstood king.

Though Charles’ reign came many years after the death of the ginger-haired tyrant at the head of the Tudor court, the spectre of Henry VIII looms large throughout this biography.  His reign and personality are held against those of Charles I to show how vastly different they were and just how much the world had changed in the intervening years.  The charges of tyranny lodged against the latter monarch pale in comparison to the actual tyranny perpetrated by Henry VIII and his children, yet none of their reigns ended with the humiliation of the scaffold, as Charles’ did.  Even more striking are the parallels De Lisle makes with our current political climate – where “populism meets religious justifications for violence” and “the rise of demagogues, who whip up mobs by feeding off ethnic and religious hatreds.”

De Lisle brings the figures surrounding Charles I to life with the strident confidence that accompanies the historian who fully understand their subject.  All of their graces and foibles are fully explored; their ever-changing allegiances reported without a hint of sentimentality.  If their motivations are not revealed in the primary sources, they are left unexplained here, preserving the jarring atmosphere Charles must have felt during his reign.  Even the most historically savvy reader is never quite certain where loyalties lie or how often the tides will turn.  In the hands of a less experienced historian these twists would be rendered into a confusing mess, but De Lisle deftly navigates the murky waters with expert precision.

My favorite part of The White King was the focus on Robert and Henry Rich and their cousin, Lady Lucy Carlisle. Having spent the better part of the last decade researching Catherine Carey, Lady Knollys, it was refreshing to see the role her descendants played during this tumultuous time in English history. The fealty they showed their monarch was far from the devotional loyalty Lady Knollys was known for in her lifetime, but the Puritan proclivities of their great-grandfather, Francis, remained un-diluted. I often found myself wondering what their grandmother, Lettice, would have thought of their intrigues. Lady Carlisle appears the most like her ancestor. Like Lettice, she even bore an uncanny resemblance to the queen she served.

I thoroughly enjoyed De Lisle’s inclusion of the correspondence between the king and his wife, Henrietta Maria, recently unearthed from the Belvoir archives.  Through their words, the unjust depictions of the queen fall apart at the seams, and Henrietta Maria is finally given the recognition she deserves.  The emphasis on Charles family life is most touching here.  The love and devotion they showed to him speaks volumes about his character.

A well-written and impeccably researched biography, The White King seeks not to revise the history of England’s Civil Wars, but uncover the truth hidden beneath the grime of centuries of propaganda and myth.
Posted by Gareth Russell at 23:56