The other Catherine Howard 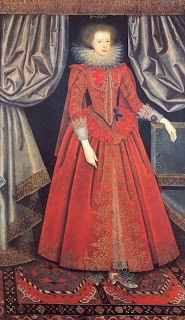 History records three Catherine Howards who enjoyed prominence at the early modern English court - the first, and most famous, was the fifth wife of Henry VIII, executed for her alleged adultery in February 1542. The second, the Countess of Notthingham, was a kinswoman and close friend of Elizabeth I, whose death in 1602 hastened the elderly queen's spiral into depression.  The third, born Catherine Knyvet in 1564, enjoyed fame and notoriety at the court of King James I, the first sovereign to rule over both England and Scotland. She was close to the royal family and knew many of their secrets, but her career ended in disgrace and allegations of financial corruption.

Born into the gentry early in the reign of Elizabeth I, Catherine Knyvet was married while still a very young teenager to Robert Rich, a minor lord. (It is often erroneously stated that only the great aristocratic heiresses were married off at a comparatively young age in this period.) Levels of mortality being what they were, she was left a widow at the age of sixteen, but her family soon arranged for her to marry Thomas Howard, a younger son of the 4th Duke of Norfolk. Marriage to the Howards, who were related to the reigning Queen on her mother's side, brought young Catherine a place in one of the oldest and most prestigious families of the English aristocracy. However, the Howards' continued adherence to the Catholic faith made many in Elizabeth's government view them with suspicion and Thomas's father had perished on the executioner's block for allegedly plotting to marry Elizabeth's cousin and Catholic heir-presumptive, the deposed Queen of Scots.

Like Catherine, Thomas had been married before - to his stepsister, Mary Dacre. She too had died young, leaving Thomas without children. Thomas, handsome, aristocratic and in his early twenties, was a good match, if he could manage to exhibit the Howards' genetic knack for overcoming the political disgrace of a loved one; Catherine, beautiful and charming, also seemed like a good choice for the younger son of a great family. Children soon followed with annual regularity - one child per year for the first twelve years of their marriage. Theophilus, the eldest, born in 1582, followed by Elizabeth, Robert, Gertrude (who sadly died in the year of her birth), William, Thomas, Catherine, Emily, Frances, Charles, Henry and John. There were also two more children, born slightly apart from one another, Edward and Margaret. In total, Catherine Howard bore her second husband fourteen children in seventeen years.

Luckily, this growing brood had access to royal favour, since Queen Elizabeth had restored the title taken from Thomas at the time of his father's execution for treason - he was now Lord Thomas Howard again, a courtesy title he was entitled to as the son of a duke. He commanded a ship in the attack against the Spanish Armada in 1588 and he was vice-admiral in charge of the fleet that attacked the Spanish port of Cadiz in 1596. He helped suppress the Earl of Essex's rebellion against Elizabeth's rule in 1601, by which stage the Queen had indicated her confidence in him by making him a Knight of the Garter. Catherine had been appointed one as one of the Queen's ladies-in-waiting, eventually being given the prestigious post of Keeper of the Jewels, which in the past had been held by women close to the queens they served - women such as Katherine Parr's younger sister, Anne.

In 1603, when Elizabeth died without children, Thomas and Catherine enthusiastically supported the accession of Elizabeth's third cousin, the King of Scots. A Presbyterian with sympathy for Anglicanism and a passionate belief in absolute monarchy, James lacked the late Elizabeth's tact and charisma, but he was nothing like the drooling, repulsive moron of later Whig imagination. In return for their support for his succession, James raised Thomas to the aristocracy in his own right, making him head of a collateral branch of the Howards as Earl of Suffolk in his own right. (Elizabeth had previously made him a baron, but the rank of an earl brought with it much greater prestige and much larger income.) James liked Thomas and the new Danish-born queen consort, Anna, warmed immediately to Catherine Howard. Like the queen, the new Countess of Suffolk was vivacious, extravagant, glamorous and had a penchant for intrigue. The two couples became very close, with Catherine apparently standing as godmother for the short-lived royal child, Princess Sophia.

Thomas and Catherine knew the royal family's secrets, particularly concerning the King's sexuality. James's association with the funding and publication of the great translation of the Bible that still bears his name has led generations of his enthusiasts to dismiss the allegations concerning his homosexuality out-of-hand, but the work of historians like Leanda de Lisle, whose excellent account of James's accession After Elizabeth should not be missed, and Michael B. Young, prove almost conclusively that James was involved in several, if not numerous, affairs with members of his own gender. Catherine, apparently, was in the know and not only knew but found it to her advantage to help the King along. According to one well-placed source, the countess was arranging liaisons between her sovereign and several "choice young men," all of which made the Suffolks increasingly indispensable to the monarch. What Queen Anna made of this, if she knew at all, is unknown.

Catherine, however, used her position as royal favourite to line her pockets - sowing the seeds of her own ruin. She accepted money and gifts like sable-lined muffs and jewels in order to work men into royal favour, persuade the government to remit fines on offending individuals and promote friends and clients. Her sympathy for Catholicism and an alliance with Spain marked her out as suspicious to the more puritanical members of James's court and she was accused, perhaps unfairly, of taking lovers herself. Her children were all married into the ranks of the aristocracy, securing Thomas and Catherine's own political ascendancy.

In 1619, Catherine's friend and patron, Queen Anna, died and Catherine herself contracted smallpox. She survived but her handsomeness was gone. The queen's death and the loss of the countess's beauty marked the start a year of disaster for the Suffolks, as their financial and political corruption led to them facing trial, after their enemies at court finally persuaded the King to move against them. They lost royal favour and were banished from court. At the time, it was Catherine who was blamed for leading the family astray, with her husband Thomas being viewed with sympathy, even by those who detested his wife and her greed. Whether this was a true reflection of Catherine Howard's role in the scandal or simply a case of the woman being re-cast as Eve to her husband's Adam is uncertain. Her children continued to make a name for themselves at the court of Charles I, and her daughter Frances was caught in one of the last great scandals of James I's time, but Catherine Howard herself died in her late sixties or early seventies over a decade after losing the lucrative favour of King James.
Posted by Gareth Russell at 19:57