The death of Steven Simpson There is a scene in Victor Hugo’s “The Hunchback of Notre Dame,” when the great cathedral’s bell-ringer is ritually humiliated by the citizens of Paris. The tolling of the bells has long since rendered Quasimodo deaf and on top of that, he is both mentally and physically handicapped. To the neoplatonic Middle Ages this did not make him more sympathetic, but rather an easy target to provide them with some passing amusement. Beneath the looming towers of Notre Dame and the carved eyes of a hundred saints and martyrs, the flesh and blood people of Hugo’s novel strip, beat and torture the innocent and uncomprehending bell-ringer, who does not know, and could not even understand, why they are doing this to him. All he can feel is pain, confusion and fear. He has been conditioned, all his life, to believe that he is less. 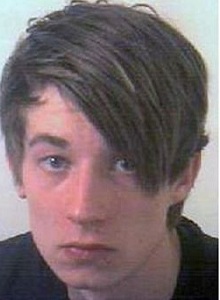 This week a 20-year-old British man called Jordan Sheard (above) received a jail sentence of three years and six months. Steven Simpson (below) was celebrating his eighteenth birthday when Jordan Sheard killed him. He was gay, he had Asperger’s Syndrome, he had epilepsy and he had a speech impediment. Before Jordan Sheard killed him, he persuaded the easily-intimidated Simpson to remove his top, after which he scrawled homophobic obscenities across his torso, smudged lipstick across his face and wrote the words “GAY BOY” on Steven’s head in black ink. Then, he started spraying him with tanning lotions and body oils, before flicking a lighter at him. As Steven went up in flames, Jordan Sheard ran away and later told everyone that Steven had started the fire himself. A few days later, the fire (which had been started on Steven’s groin) took his life; he died in great agony as a result of 60% burns. Faced with the evidence provided by numerous eyewitnesses, Jordan Sheard eventually admitted that he, not Steven, had set fire to the birthday boy’s crotch and then left others to try to save him. The presiding judge, Roger Keen QC, described the events that had taken Steven Simpson’s life as “good-natured horseplay” that tragically went wrong. For the humiliation, bullying, torturing and death of this young man, Jordan Sheard received three years and six months. 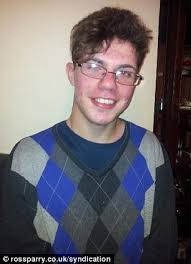 Steven Simpson’s death is both a lesson and a tragedy. The human rights campaigner, Peter Tatchell, is absolutely right in calling the sentence “outrageously lenient.” Ben Summerskill OBE, speaking on behalf of the gay rights’ pressure group Stonewall, remarked that “the leniency with which the killer has been treated is disturbing.” Carol Povey, director for the Centre for Autism, added, “It is vital [that] disability hate crimes are punished with the same severity as other hate crimes.” The Crown Prosecution Services had wanted to try the case as a hate crime, but the judge would not allow it. After all, manipulating a vulnerable youth to perform like a circus freak for your amusement before you set him on fire is just “good-natured horseplay.”

But perhaps the best assessment of the chain of events that led to Steven Simpson’s death came from Tom Warburton, the prosecuting lawyer: “This was a cruel case of bullying based on Steven’s sexuality and disability. Steven had significant learning difficulties but was getting on well, and had recently started college where he was studying life skills. On his course he made some new friends and decided to have a few of them over to his house to celebrate his 18th birthday. The focus of the party quickly turned to Steven and his sexuality. He was encouraged to take off his shirt and dance around, he had obscene pictures and writing scrawled on his body, and he was sprayed with suntan oil. Had the horseplay ended there we may have had a different story to tell today. Sadly it didn’t. While we accept Jordan did not intend to kill Steven, his actions did lead to his death. His disability and sexuality were used as weapons against him, with the group of friends taking advantage of his naivety.”

Steven Simpson had little experience of socializing during his teenage years, because of his Asperger’s, his epilepsy and his learning difficulties. By all accounts, he was too trusting, too inexperienced and too naive to fully appreciate that he ought to have said ‘no’ to what he was being asked to do by his guests. But he had finally started to make friends at college and the relief that brought him can be imagined; buoyed along by the experience, he had decided to throw himself a birthday party, a brave move that backfired spectacularly. There are many reasons for explaining why Steven Simpson found himself in the position he did. It would be possible to “spin” this story as a tale of terrible bad luck, which seems to be the interpretation of the presiding judge. It would be equally possible to focus solely on the actions of Jordan Sheard who, having set fire to someone, ran away rather than try to help him and then tried to save his own hide by trying to foist all the blame for the fire onto the dying Steven. But focusing only on victim and perpetrator is a view that leaves out the audience.

During the course of the trial, one of the most disturbing details to emerge was that Sheard had been “egged on” by other guests there. (Guests who had, by most accounts, turned up because there was a party, not because they knew or liked Steven.) Having discovered the truth about his sexuality and his disability, they proceeded to bully Steven remorselessly – all under the camouflage of it being “banter,” no doubt. Or “good-natured horseplay.” Steven Simpson was not just the victim of a moment of madness that came out of nowhere; he was humiliated, bated and abused in the hour preceding his death. It was, in a very real way, pre-meditated. He was taunted and mocked and forced to perform like a Victorian circus freak. That he was bright, well-mannered, good-hearted and kind was obviously of absolutely no relevance to the cretins who surrounded him, stripped him, coated his body in degrading slogans and symbols and then deliberately placed a flame at his lotion-coated groin. Jordan Sheard may not have intended to kill Steven Simpson, but he certainly had no qualms about psychologically and physically abusing him. And, as he did so, his work was aided by a dozen helping hands, a dozen chanting voices, a dozen hyena laughs, loud, forced, competitive; others at the party did not step in until it was far, far too late. They are not guilty of a legal crime, but they are complicit in a moral one. They stood by; they let it happen. The old (and possibly apocryphal) statement attributed to Edmund Burke when he heard of the execution of Marie-Antoinette, that for evil to flourish it is necessary only for good men to do nothing, is true of all events, great and small, in history. If we do nothing to stop an injustice, we are complicit in it. If we allow injustices like Steven Simpson’s, we are not so very far removed from the chanting crowds of Victor Hugo’s novels. Or the Baroness Orczy’s, who described jeering crowds as ‘human, only in name.’

Jordan Sheard deserved much, much longer than forty months in jail. He killed that boy and he certainly intended to harm him. To suggest that this was all horseplay that had gone wrong is tantamount to saying that attacks on the vulnerable, for whatever reason, are excusable under certain circumstances.

Steven Simpson was vulnerable, but he was not less. He had his whole life ahead of him and he had worked hard to overcome the difficulties given to him by nature. He could not interact with people in the same way the majority of the population can and he could not fully understand the nuances of what was happening around him on the night he died. In that sense, he was an innocent and that detail gives his death an extra poignancy. But if our only reaction to Steven Simpson’s death is sorrow, then we are missing the point. There is much to be very, very angry about. In 2013, it is astonishing that this kind of behaviour should result in under four years in prison. It is jaw-dropping that a judge could refer to something like this as “good-natured horseplay.” It is both grievous and enraging that Steven Simpson’s parents have to live the rest of their lives knowing that the child they had loved, nurtured and worried over, spent the last hour of his life as a butt for the sadistic jokes of a bunch of braying morons who only stopped laughing at him when it was time to run away as he burned to death. Most of all, we should be furious and worried that not enough is being done to stop this; the verdict this week in Sheffield failed to send a clear message that behaviour like Jordan Sheard’s cannot and must not be tolerated in this country. Crimes like this must carry a penalty so harsh and unambiguous that it will discourage the trolls of our society from behaving like this again. Harsher punishments, at least, might protect more people like Steven Simpson. As Jordan Sheard showed us when he ran away, they certainly care about their own safety and wellbeing, at least.

Jordan Sheard and his cohorts asked the British justice system to say that they did not kill Steven Simpson – that what happened had been the result of a chain reaction of unlucky happenstance. By handing down a sentence as lenient as forty months, Judge Roger Keen agreed with them. He is saying that what happened to Steven Simpson was an accident that resulted in a needless death, not a process of deliberate cruelty – the kind that always carries with it the risks of a terrible outcome. This sentence says that the parading of Steven Simpson as a freak in the hour before his death, either because of his sexuality or his disability, was nothing more than good-natured horseplay that resulted in something unforeseeable. Judge Roger Keen implicitly sent a message that the law will not do enough to protect the vulnerable. There is a great quote from Shakespeare’s “King Richard the Third,” in which Richard stands and asks to be excused of the deaths he has caused: -

RICHARD
Say I slew them not.

LADY ANNE
Then say they were not slain.
But dead they are...

Steven Simpson died horribly, but the people in charge of avenging that are acting as if it was all just a game gone wrong.