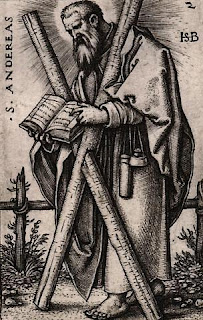 Firstly, a word of condolence to the Northern Irish blogger, "Lord Belmont in Northern Ireland," whose posts on the history of the Protestant Ascendancy in Ulster and their surviving (or vanished) homes are both invaluable and fascinating. He sadly lost his mother, whom he affectionately nicknamed "the Dowager," when she passed away peacefully at 10 p.m. on Saturday, June 19th. Sincere condolences, thoughts and prayers to him and his family at this sad time.

Secondly, and on an unrelated note, excavations in Rome have uncovered some of the earliest surviving Christian icons of Saint Peter, Saint John the Evangelist and Saint Andrew (above; the patron saint of Scotland), as well as the evangelical Saint Paul, author of much of the latter-half of the New Testament. They were discovered in Santa Tecla catacombs beneath the Eternal City.

MSNBC has more on the story, including accounts of how lasers were used to help uncover these artifacts, the happy partnership between religion and science which helped unearth them and a little on their historical significance.
Posted by Gareth Russell at 22:18