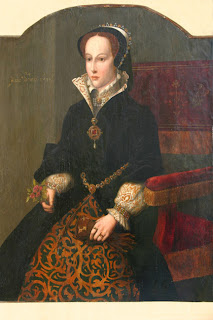 The blog Mary Tudor: Renaissance Queen has ten and fascinating random facts about the life and personality of Queen Mary Tudor (above), eldest surviving daughter of King Henry VIII and ruler of our fair islands from 1553 to 1558. I particularly enjoyed the anecdote about King Henri II of France refusing to hear England's declaration of war, because it was unthinkable that His Majesty could have war declared upon him by a woman!
Posted by Gareth Russell at 22:41