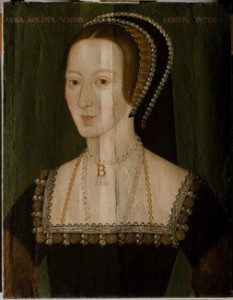 With the exception of a badly damaged silver medal, minted in 1534 to mark the pregnancy that tragically turned out to be her first miscarriage, there are no known surviving portraits of Anne Boleyn painted from life - despite the valiant efforts of certain historians to identify dubious and unlabelled portraits. As late as 1736, a full-length 16th century painting said to be of the queen was held in the private collection of Lord and Lady Lumley, but it has since vanished. However, there are literally dozens of portraits dating from the late 16th century and early 17th showing Anne in a variance of the same costume - dark hair, French hood, black velvet dress, gold and pearl initialled jewellery. All of which seems to lend credence to the idea put forward that at some point in her life, Anne probably did pose for a portrait in this costume and that it formed the inspiration for the dozens of slightly varying copies of it, which now survive.
The version of the portrait which tallies most closely with eyewitness physical descriptions of Anne Boleyn is probably this one. However, the portrait above has arguably become the most famous and iconic of all the portraits said to represent Elizabeth I's mother. The hair colour is slightly too light, but David Starkey wrote in praise of the sitter's enigmatic smile which, he felt, "captured something of her sexuality." Lady Antonia Fraser, in her study of Henry's marriages, wrote that the portrait captured the "prim and provocative" side of Anne's personality.
The portrait, currently housed in the National Portrait Gallery in London, was taken down for carbon dating to see how close to Anne's lifetime it had been painted. The scientific tests confirmed what many historians had long speculated - that the National Portrait Gallery portrait of Anne dated from the end of the 16th century, about half a century or so after Anne's death and well into the reign of her daughter, Elizabeth, by which point there was naturally a rise in the demand for portraits of the Queen's mother.
However, the tests also revealed that this famous painting is disintegrating and in dire need of major conservation work before the gallery can put it back on public display. In a statement, the NPG said: -

“It is in a particularly vulnerable and unstable condition as a result of structural problems with the wooden panel. Vertical cracking has occurred across the picture causing minor paint loss where the wood has split (see the photograph taken in raking light). We need to act now as the damage is being caused by the long term effects of an unsuitable cradle (an applied wooden panel support) which must be removed. Therefore this important and much loved painting needs urgent conservation treatment to ensure it can be put back on public display.”

For many people, myself included, the NPG portrait of Anne is the first one they can remember seeing as a portrait of Anne. Although I do not believe it is the most physically accurate depiction of her, I do agree with the NPG that it is "important and much loved". It is an iconic representation of Anne, which has been used in countless textbooks, biographies, histories, learning aids and memorabilia. More importantly, the testing does indicate that it, and the portrait in which Anne is seen in a very similar attire clutching a rose, were most likely painted as copies of an original which was itself painted when Anne was alive.
For any of those interested in making a donation (however small) to aid in the portrait's restoration and conservation, you can do so by clicking here. Then click on "Queen Anne Boleyn" from the drop-down menu of the paintings needing restoration option and choose the amount you would like to donate. You'll then be taken through the NPG payment processing.
Posted by Gareth Russell at 18:13