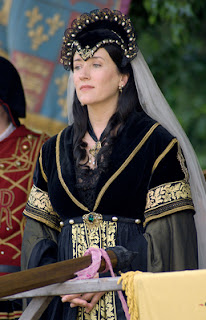 As part of a new series of articles, Claire Ridgway, creator of The Anne Boleyn Files and its sister site The Elizabeth Files, will be writing on the popular stereotypes which still govern the reputations of Henry VIII's six wives. She begins by querying if Katherine of Aragon really was the "boring one," before going on to discuss the nuances of various modern views of Henry's first wife and the mother of Queen Mary I.

"To our modern eyes, Catherine appears a religious fanatic, a victim, a woman who wallowed in her misery and would not let go of her marriage, and many blame her for the woman her daughter Mary became, an intolerant and cruel queen. People say that she should have accepted the failure of her marriage and gone into a convent, and that doing so would have saved her and her daughter a lot of grief, but, we have the benefit of hindsight; we know how the story ended and what a damaged woman Mary became. We are also looking on the situation with our 21st century eyes and not taking into account the times Catherine lived in or the beliefs that surrounded marriage... She stuck to her principles and her beliefs against a man who went on to execute two wives. She was prepared to die a martyr if she had to and I admire her strength and her courage."

Above: Irish actress Maria Doyle Kennedy as Katherine of Aragon in the television series The Tudors.