Famous Shipping Disasters: The attack on the "Lusitania" (1915) 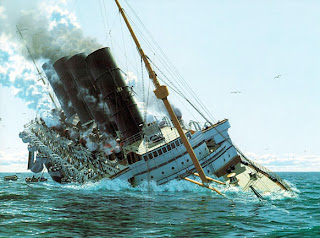 Although she is less famous than her equally-unlucky rival the Titanic, it's arguable that the Lusitania's actual impact on history was far greater. When she first entered service for the Cunard Line in 1907, the 32,000-ton flagship was instantly hailed in the British press as recapturing that all-important national maritime pride in the commercial race for transatlantic dominance with Imperial Germany. Since 1897, German companies like Northern German Lloyd and Hamburg-Amerika had garnered most of the international prestige with their series of patriotically-named superships. With the Lusitania and her slightly larger, slightly faster and slightly younger sister-ship, Mauretania, Britannia was fighting back. The Cunard sisters were nearly twice again as large as any of their rivals and both easily out-paced their German competitors when it came to speed. At the end of 1907, the Mauretania won the Blue Riband, the coveted prize for the fastest crossing of the North Atlantic, which she quite incredibly managed to keep until 1929. With room for 2,200 passengers in three classes, the Lusitania was praised for the opulence and comfort of her interiors (below), as well as for her speed, safety and commercial success. 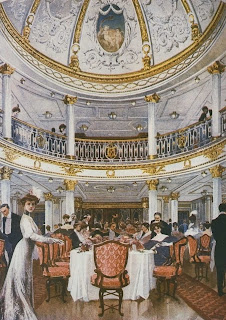 But the Lusitania's ultimate historical importance arrived eight years later when she once again became a symbol for the rivalry between the British Empire and Germany. This time, the rivalry had turned into a bloody conflict and as the First World War raged, more and more of Britain's commercial fleet was requisitioned by the Royal Navy. A drop in passenger numbers meant that Lusitania's two running mates, Mauretania and Cunard's new flagship, Aquitania, were voluntarily removed from service and laid-up in Liverpool. (Both were called up for service as troop carriers and hospital ships once the Gallipoli campaign against the Ottoman Empire began.) By the spring of 1915, the Lusitania was the only major luxury liner still operating the route from New York to England.
The Imperial German embassy in America suspected that she was being used to transport munitions from British sympathisers in the United States. Furthermore, the government in Berlin had recently declared that any ships, commercial or military, attempting to bypass the German blockade of Britain would be legitimate targets for German submariners. Heedless of these warnings, or perhaps ignorant of them, the Lusitania set sail from New York from Pier 54 on May 1st, 1915. Six days later, off the Old Head of Kinsale in Ireland, she was struck by a German torpedo at 2.10 p.m. Passengers, finishing dessert in the first-class dining saloon, felt an enormous jolt rock the ship and from the periscope of the U-20, the German captain, Captain Schweiger, heard a second explosion, which he initially assumed to be an exploding boiler or coal powder.
The sinking of the Lusitania was quick, chaotic and hideous. The 32,000-ton steamer sank in only eighteen minutes, tipping hundreds into the beautiful but freezing Irish waters. The ship pitched so violently to one side that half the lifeboats could not be launched; power-cuts and the speed of the sinking meant that dozens of passengers were trapped inside the ship's elevators and drowned like caged animals; lifeboats fell and crushed survivors fleeing in ones below; children were separated from their parents in the chaos and dozens were killed by miniature explosions, scalding water and deck equipment. Residents in the nearby Irish port of Queenstown later said that the dozens of children's bodies in their little coffins in the town's streets was a sight they would never forget.
Since the day of the Lusitania's sinking, controversy has raged about what caused the second explosion and the actions of the respective British and German governments. In the United States at the time, there was no doubt that Germany was to blame. American public opinion was inflamed by the deaths of so many American civilians and Captain Schweiger was painted as a war criminal for refusing to give the Lusitania time to disembark her civilian passengers before firing. Britain, unsurprisingly, concluded that the sinking had been "the illegal act of the Imperial German government" and insisted the second explosion had been caused by Schweiger vindictively firing a second torpedo into the ship's side. Germany, and later conspiracy theorists, insisted the second explosion was Britain and America's fault, because they had been trading munitions and it was those munitions which exploded on impact, causing the Lusitania to sink in such record time.
It seems that the Lusitania was carrying arms - shells and cartridges - but she had been carrying those in trade even before the war began. It is doubtful that American port authorities would ever have allowed a commercial vessel to load significant amounts of military hardware, particularly at such a delicate time. In hindsight, the second explosion, which helped pitch the Lusitania onto her side as she sank, was almost certainly caused by the first torpedo igniting either a boiler fire or a coal dust explosion. The British version of events, which claimed there had been a second German torpedo, and the German version of events, which claimed the Lusitania had been little more than a military cargo ship with a civilian shield, were both almost certainly incorrect and self-serving. At the time, Germany's reputation in the United States was irreparably damaged and Germany's two principal allies, Imperial Austria-Hungary and the Ottoman Empire, both distanced themselves from the sinking and refused to condone it.
The United States entered the war on the Allied side in 1917.
Posted by Gareth Russell at 19:19