Marie-Antoinette and the Affair of the Minuet 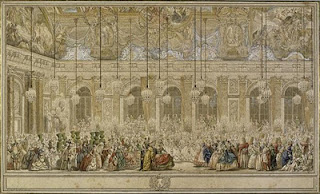 Via Tea at Trianon comes an article about an early clash between the 14 year-old Marie-Antoinette and the Versailles court aristocracy over an issue of precedence at the young princess's wedding ball.
Due to the intrigues of the Austrian ambassador and France's foreign minister, the Duc de Choiseul, a fifteen year-old aristocrat, Anne-Charlotte, Princesse de Lorraine, had been given the right to take the first dance at the ball after the Princes of the Blood. The House of Lorraine, the family of Marie-Antoinette's late father, the Emperor Franz-Stefan, occupied a difficult place in French court etiquette, because of the debate about whether they were members of the native nobility or an independent, foreign dynasty. In any case, the attempt to honour Anne-Charlotte with the first dance after members of the immediate Royal Family ruffled feathers in a way that they could only be ruffled at Versailles. Half the court aristocracy threatened to boycott the ball entirely, much to the distress of the King, who had poured an enormous amount of money into the celebrations for his grandson's marriage to Marie-Antoinette. As far as the courtiers were concerned, Anne-Charlotte de Lorraine's precedence at the ball over them was obnoxious, inappropriate and a sure sign that Marie-Antoinette was arriving to shamelessly promote her family's interests over her husband's. The fact that the bride in question was fourteen years-old and had not yet set foot in France when this matter was decided was of little concern to her new critics.
For those interested in the historical significance of the so-called "Affair of the Minuet," there is also an excellent article by Professor Thomas E. Kaiser - "Ambiguous Identities: Marie-Antoinette and the House of Lorraine from the Affair of the Minuet to Lambesc's Charge."
Posted by Gareth Russell at 14:12