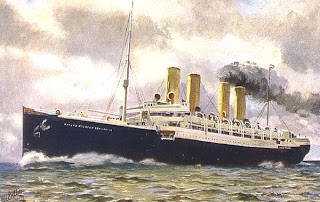 Named after the first emperor of a united Germany, Kaiser Wilhelm der Grosse ("Emperor William the Great") first entered service for the North German Lloyd shipping line in May 1897, operating the transatlantic route from Bremerhaven to New York, via Southampton. She was the first liner to use the soon-to-be-iconic four funnels and media attention focused on her speed, size and the neo-Baroque opulence of her first class interiors, which were soon nicknamed the Luxe Germanica style of decoration (below). She was a huge hit with wealthy German and American travellers, whilst her steerage quarters were regularly fully booked by immigrants moving to the United States. On her first voyage, she captured the Blue Riband for the fastest crossing of the North Atlantic, much to the consternation and shock of the British who still firmly believed that Britannia alone should rule the waves. Commercially, the Kaiser Wilhelm der Grosse was successful enough to spawn three sister ships and running-mates, all named after members of the Imperial Family - the current Emperor Wilhelm II, the Crown Prince Wilhelm and his wife, Crown Princess Cecilia. They were nicknamed "the Four Flyers."
When the First World War broke out in August 1914, the liner was requisitioned by the German navy as an auxiliary cruiser. Her captain, Captain Reymann, sank three British ships, but only after offering their crew the chance to evacuate. Running low on fuel, the ship set sail for the Spanish north African colony of Rio de Oro, where she was intercepted by the British warship, HMS Highflyer. A battle ensued, with the Kaiser running out of ammunition half-way through. Determined not to let the ship fall into enemy hands, Captain Reymann ordered the evacuation of the Kaiser and then had the remaining crew members detonate an enormous hole in the ship's side. Scuttling, the nautical form of suicide, thus ensured the Kaiser sank rather than fall into British hands. Captain Reymann swam ashore and worked his way back to Germany as a stoker on a Spanish passenger ship.
The Kaiser's demise so early in the war and the fact that it had been refuelling which left her vulnerable to enemy attack made both sides change their plans about converting ocean liners into auxiliary cruises. From that point on, they were more often converted into troop carriers or hospital ships.
Posted by Gareth Russell at 16:15