Famous Shipping Disasters: The sinking of the "Britannic" (1916) 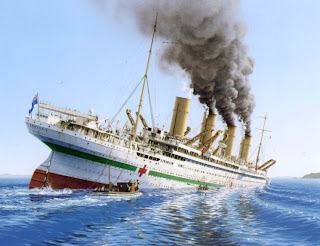 When news reached Belfast in 1912 that the Titanic had sunk on her maiden voyage with such an enormous loss of life, the Harland & Wolff shipyards in the city were quick to learn lessons from the tragedy. When the findings of the American and then the British inquiries were published, numerous changes were made in the building of the Titanic's incomplete younger sister. Designed to be the third of three luxurious transatlantic liners for the White Star Line, most of east Belfast's workforce were still toiling away on building this ship when changes were made to prevent a repeat of what had happened with the Titanic. Both the Titanic and the first sister, Olympic, had been named after powerful figures in Greek mythology - the Olympic after the fictional gods of Mount Olympus and Titanic after the titans, a race of younger gods gifted with incredible strength. The third and largest of the three sisters was apparently originally intended to be named Gigantic, which had the same triumphalist air as the name Titanic. Desperate to put as much distance between their new ship and the disaster of 1912, White Star stealthily had the name changed to the more patriotic Britannic and then denied there had ever been any serious intention of christening her Gigantic.

Weighing in at 50,000 tons, the Britannic was the largest ship ever built in the British Isles at the time of her launch in 1914. She was four thousand tons heavier than her unlucky sister Titanic and five thousand heavier than her eldest sister, and future running mate, Olympic. Together, the two surviving sisters were intended to operate a weekly crossing of the north Atlantic - with one leaving from New York, at the same time another would leave from Southampton in England. Unlike her sisters, however, the Britannic was not the largest ship in the world at the time of her construction. That honour had already gone to a 52,000-ton German liner, the Imperator, and would soon go to her sister, the 54,000-ton Vaterland - which, like Britannic, was pandering to the ultra-patriotic environment of 1914. However, she was to remain the largest ship built on British soil until the Queen Mary in 1936 - quite the achievement for Harland & Wolff.

Britannic took to the water in Belfast for the first time on 26th February 1914. Some of the proposed changes included extending the watertight bulkhead divisions, making it easier for steerage class passengers to reach the lifeboats and nearly quadrupling the number of lifeboats. There were also more cosmetic alterations, including expanding the ship's famous grand staircase, its first class Louis XVI restaurant, adding a Parisian coffee house like the one the Titanic had and making various expansions to the top private suites in first class.

However, the Britannic was destined never to see commercial service and when the First World War came in August 1914, the new ship was hastily converted into a hospital ship on the government's orders. Now formally serving as His Majesty's Hospital Ship Britannic, HMHS Britannic's first tour of duty involved her evacuating the numerous British and Commonwealth casualties from the military campaign in the Dardanelles, against the Ottoman Empire.

After safely depositing thousands of invalids in Greece, the Britannic was returning to collect more soldiers, under the command of Captain Bartlett and with a combined crew and medical staff of just over one thousand people on-board. There had been some trouble with the weather earlier in the week, but by the morning of 26th November 1916, the Britannic was steaming through a glorious Mediterranean winter's morning. At about twenty minutes past eight, a massive explosion shook the liner. The ship had struck a German mine and soon began listing rapidly on her side. None of her new safety features, designed to protect her from the kind of natural disaster which had destroyed her sister, could feasibly cope with the technological attack from a military mine.

Captain Bartlett's response was rapid and within ten minutes, the first lifeboats were leaving the Britannic. In a truly horrifying moment however, the Captain's tactical decision to try and race the ship closer to the shallows and thus run her aground to save her, meant that one lifeboat was torn to pieces by the still-turning propellers. Fifty-five minutes after being struck, the Britannic suddenly turned over on her side and vanished into the crystal blue waters. One of the nurses, Violet Jessop, who had once served as a stewardess on the Titanic, later wrote, "She dipped her head a little, then a little lower and still lower. All the deck machinery fell into the sea like a child's toys. Then she took a fearful plunge, her stern rearing hundreds of feet into the air until with a final roar, she disappeared into the depths, the noise of her going resounding through the water with undreamt-of violence...."

Had the Britannic hit the mine on her way back from her mission, when she was filled with injured soldiers, it's likely that her sinking would have constituted one of the worst humanitarian disasters in maritime history. As it was, the disaster cost "only" thirty lives. The survivors were soon picked up by the British Royal Navy and conspiracy theories later circulated that the ship had been deliberately targeted by either a German spy or a German torpedo. However, given the scale of the damage inflicted on the wreck, it seems clear that it was a mine which sank the Britannic.

After the war, White Star Line were rewarded for their service to the British war effort and for the loss of the Britannic. Under the terms of the Treaty of Versailles, Germany was forced to reimburse Britain for her lost liners. The 56,000-ton Bismarck, then the largest liner in the world, was given to White Star and renamed Majestic (below.) She became the flagship of the White Star Line and the largest passenger ship in the world for over a decade, until the French Line's Normandie was designed by a former Tsarist naval architect in 1935.

Today, the Britannic lies on her side at the bottom of the Mediterranean. Her wreck was discovered by the famous oceanographer Jacques Cousteau in 1976. All that remains on dry land of her fabulous interiors, which were never completed or installed because of the war, is the lavish philharmonic organ that was intended to add a 'Baroque' feel to her grand staircase. It is on display at the Swiss National Museum in Seewen.
Posted by Gareth Russell at 22:04