Famous Shipping Disasters: The torpedoing of the "Carpathia" (1918) 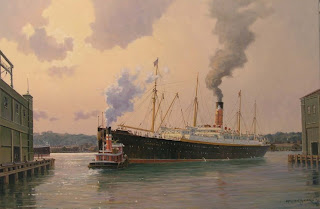 Famous for rescuing the survivors of the Titanic disaster in 1912, the 8,000-ton Carpathia was one of the smaller members of the vast Cunard fleet. Over the course of her career, which began in 1903, nine years before she became famous because of the Titanic, the Carpathia had operated the route between Liverpool and Boston, undertaken cruises to the Mediterranean and sailed between New York and the Austro-Hungarian city of Fiume.

In 1914, she was requisitioned for the Imperial war effort and assigned to help the Canadian Expeditionary Force move Canadian troops across the Atlantic to the Western Front. As with most requisitioned passenger ships, her voyage routes and purposes were often changed and she served in a variety of functions between 1914 and 1918. One of the troops she brought over for active service was the American soldier, Frank Buckles, a native of Missouri who went on to become the last living American veteran of the First World War; dying at the age of 110 in 2011.

On 17th July 1918, a date that was to become famous in European history for another event entirely, the Carpathia was sailing through the Celtic Sea, near the southern coast of Ireland, en route for Boston. The recent influx of American service personnel, some of whom the Carpathia had helped bring over, had hastened the defeat of the Central Powers and the Great War was now in its final months. But, at 9:15 in the morning, the Imperial German Navy showed that it still had some teeth; its submarine, U-55, fired two torpedoes into the Carpathia's side. Five men died in the initial explosions. Captain William Prothero ordered everyone into the lifeboats, which were quickly lowered, as the ship began to sink. Keen to hasten the ship's end, the U-55 vindictively fired a third torpedo and was menacingly approaching the lifeboats when the Royal Navy ship, Snowdrop, arrived and opened fire.

It was a measure, perhaps, of just how appallingly vindictive the First World War had become that the U-55 seemed to be preparing to target the survivors. In 1915, when another Cunard ship, the Lusitania, had been torpedoed, the German navy had insisted that they would never have fired a second torpedo into a sinking ship. By 1918, such niceties had vanished and three had been fired, with the possibility of attacking the survivors in the lifeboats only being prevented by the arrival of a British warship.

The Carpathia sank in one hour and forty-five minutes; its wreck was discovered by American author Clive Cussler in the year 2000.