The Duchess is expecting 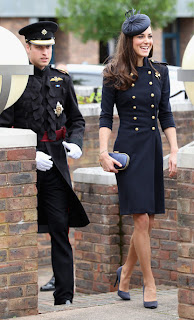 It is a great joy to be able to post that the Royal Household has issued the following statement regarding Their Royal Highnesses, The Duke and Duchess of Cambridge.

The Queen, The Duke of Edinburgh, The Prince of Wales, The Duchess of Cornwall and Prince Harry and members of both families are delighted with the news.

The Duchess was admitted this afternoon to King Edward VII Hospital in Central London with Hyperemesis Gravidarum. As the pregnancy is in its very early stages, Her Royal Highness is expected to stay in hospital for several days and will require a period of rest thereafter.


A few weeks ago, I did a series on the history of the British monarchy and I rounded it off by saying this. With today's happy news, I absolutely stand by it. 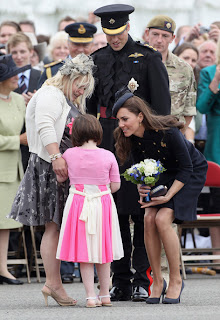 "Two hundred years ago, Marie-Antoinette remarked that she could never understand how people could emotionally invest in a republic. Her rationale was that in a monarchy the people know their ruler from birth; in a republic, they don't. Part of the British public's long-term support for the monarchy over the next generation will be because of their emotional investment in the Duke and Duchess of Cambridge. The couple are genuinely liked and they have managed to fuse the Windsor mission of public service done with dignity, with the modern monarchy's awareness of friendliness and managing the media. People feel an emotional connection to the future King William V and Queen Catherine; that connection will extend to their future children. That, coupled with the high level of respect and affection enjoyed by the current Sovereign, is the short-term reason for the monarchy's continued prosperity. (It now seems melodramatic to talk about its "survival," as one did in the mid-1990s.)

The long-term reasons, however, stretch back both in time and in psychology. The monarchy is in some ways an illogical institution or, rather, an incongruous one. It was, however, born out of realpolitik. It was essential in the Middle Ages and it validated all of that era's societal mores. To be without it was unthinkable. In the twenty first century, to be without the monarchy is no longer unthinkable. It is, however, unwise. The fate of countries who have abolished their monarchies are not exactly enviable, either in the long-run and much less in the short. The monarchy gives a sense of continuity. In an age of disillusionment with politics, the monarchy has been able to provide a sense of national leadership that is separate from questions of party and politicians. Britain's ambivalence, or hostility, towards its elected leaders makes it fundamentally unlikely that they would ever take well to someone who not only led the government, but also led the country. A combined head of state and government would most likely meet with derision in Britain. We quite simply don't have Americans' sense of hope and excitement about our new executive leaders. We're too snobbish and too skeptical  And, I suspect, we're too sentimental as well. Marie-Antoinette was right to say that the cradle-to-grave nature of royal life is part of monarchy's unending selling appeal. It taps into our belief in fairy tales, but more importantly it links the past to the present and it gives a sense of stable hope for the future. It removes the uncertainty of what's coming next; it provides figures of national interest, who can serve their country without worrying about currying for votes; the royals don't have to win anything, they can simply do. The monarchy gives people something to cheer about, to talk about, to identify with. It's by no means a perfect system, but I can't help but feel that it's still one of the best. Like Elizabeth I said five hundred years ago, it's a kind of marriage to the nation and in some ways, to me at least, that idea is still magnificent."
Posted by Gareth Russell at 17:43