"The Creation of Anne Boleyn" (review) 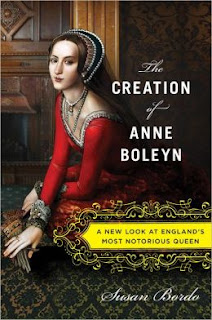 More nonsense has been written about Anne Boleyn than almost any other personality in British history. The six-fingered witch of Counter-Reformation propaganda was the most extreme re-imagining of Henry VIII's second wife, but the most enduring trope is that of an unpleasant, morally-dubious social climber who trampled on anyone who got in her way and who lied, bullied and manipulated her way onto the consort's throne. There is a pervasive view in modern literature and history that holds that although Anne Boleyn probably was not guilty of the crimes for which she perished in 1536, she nonetheless basically deserved her eventual fate. To paraphrase a popular television show, Anne played the game of thrones - and lost. She was a game player, who deserved neither pity nor special treatment.

The problem with that view of Anne Boleyn is not only that it's factually inaccurate, but that it's also the intellectual brainchild of five hundred years of misogyny. Anne Boleyn may have played the political game like a man, but she perished as a woman. She was not dragged off her pedestal by political or financial allegations, but rather her enemies eviscerated her on the grounds of her gender. They played, shamelessly, to the worst kinds of paranoia about what women would do if they had power. At Anne's trial, lurid details of her alleged seduction of her brother, Lord Rochford, and her libidinous sexual approaches to other members of the royal court were included in the indictments - right the way down to a description of how she had used French kissing to inflame her brother into committing incest with her. It was character assassination in its basest form, intended to annihilate Anne's reputation and fill her judges with such revulsion that they would not hesitate to condemn her. To exonerate her would not only have been spitting in the face of the king's justice, but it could also look worryingly like tacit toleration for her perversions.

In her new book The Creation of Anne Boleyn, academic Susan Bordo sets out to explore how and why Anne Boleyn's reputation has been shaped. Anne's story has inspired operas, plays, novels, television dramas and movies. She is a modern day industry in her own right; by far and away the most memorable of Henry's half-dozen wives, as Bordo wryly notes in her descriptions of Tudor fans' attempts to impose a kind of equality of interest on all six, despite the fact that all six are not equally interesting. And certainly not all equally important.

It is on this interaction between Boleyn's specter and popular culture that Bordo is at her strongest. Bordo is an expert on the academic politics of feminism and she goes to town on the allegedly "feminist" presentation of Anne in The Other Boleyn Girl (to date, a book that spawned a television drama that spawned a motion picture that spawned a thousand stupid questions). Equally interesting are her assessments of Hilary Mantel's Anne Boleyn, resurrected as a deeply unpleasant predator in the Cromwellian novels Wolf Hall and Bring Up the Bodies. Bordo is kinder to Mantel than she is to Philippa Gregory, but she manages to set Wolf Hall's jarringly hostile portrayal of Anne in the context of a new kind of feminism and shows that the Boleyn of Wolf Hall and the Boleyn of The Other Boleyn Girl may be far apart in terms of literary skill, but perhaps not necessarily so in cultural inspiration. (Particular venom is reserved for Carolly Erickson's The Favored Queen, and rightly so.)

Bordo is similarly strident in her dissection of modern academia's interest in Anne. She excoriates G.W. Bernard's recent (and very controversial) biography of Anne Boleyn as "a sensationalistic, poorly argued extension of an equally flimsy scholarly article from 1991" and argues (again rightly) that no peer critiqued Bernard's arguments with the rigour they deserved because he was part of an old boys' network of professional historians. Bordo manages to deftly balance searching for the real Anne and the Anne of historical opinion with the Anne of modern pop culture. In doing so, she has managed to keep her finger on the pulse of both emerging academic papers and things like Facebook, fan pages, successful TV shows and movies. This is a book that takes pop culture seriously and in doing so produces an utterly fascinating view of how historical reputations are shaped and made. A particularly fascinating section comes from her private interviews with two actresses famous for their on-screen portrayals of Boleyn - Canadian Genevieve Bujold, who was nominated for an Oscar for her role in 1969's Anne of the Thousand Days and Natalie Dormer, who deservedly won legions of fan for playing Anne in the Showtime television series, The Tudors. Dormer's section on how she worked hard to give her Anne more depth and passion, and the lengths she went to as an actress to perfect her characterization, will be interesting to students of theatre and acting, as much as to those of gender and history.

There are a few, very, minor errors in The Creation of Anne Boleyn - for instance, at one point Bordo refers to Anne Boleyn's sister, Mary, as "thought by many to be the prettier of the two". There are no contemporary descriptions of Mary Boleyn's appearance, whatsoever. Quite probably because she was never judged important enough to be noticed in the way her sister was. However, Bordo is technically right in writing this, because somehow and from somewhere, the myth grew that Mary was the most beautiful of Thomas Boleyn's two daughters. Gaining validity by no surer virtue than that endowed by repetition the story of Mary Boleyn's prettiness is a reminder of the power that oft-repeated but unverifiable myths have on our perceptions of the past.

Finding errors in The Creation of Anne Boleyn, however, is essentially nit-picking. This is an erudite and thoroughly researched examination of an enormous and very interesting topic. Tracing Anne's reputation in the sources of her own time, who said what and why, right the way through the dramas and novels of subsequent centuries, down to the biographies and silver screen adaptations, Susan Bordo has produced a witty, compelling, convincingly argued and gloriously interesting book about one of England's most undeservedly notorious women. The Creation of Anne Boleyn is as fascinating as a commentary on modern culture, media and sexism as it is in discussing how a queen who died five hundred years ago has managed to remain the subject of so much fascination - producing the sublime, the intelligent, the bigoted and the ridiculous.
Posted by Gareth Russell at 18:50