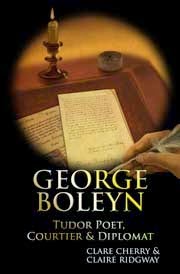 Diana Mitford once reflected that when reviewing a friend's book, the reviewer is inevitably predisposed towards a favourable conclusion and that only the disingenuous would pretend otherwise. In a similar spirit, I should begin this article by pointing out that I am a friend and, via my novels Popular and The Immaculate Deception, a colleague of one of the authors of George Boleyn: Tudor Poet, Courtier and Diplomat - Claire Ridgway. Both our books are published by the same press and I helped lead two of her beautiful Tudor tours in 2012. So I approached this, the first full-length modern biography of the third Boleyn sibling, with a sympathetic eye and hopefulness that it would prove an enlightening read.

Passion and scholarly probing saturate this book; the authors' excitement and fascination with their subject is underpinned by years of research into the compelling story of his life and the awful trajectory of his demise. Having made a career by inviting people to experience her ongoing research and education into the Tudor court with her, Claire Ridgway uses the same tactic in this book. There's a touch of Antal Szerb here, the great Hungarian-Jewish historian, who began his 1942 study on the court of Marie-Antoinette by informing the reader that "if he absolutely insists that a writer should address him in the scholarly manner, from on high, in ex cathedra tones, then he should simply toss this book on the floor. My way is to speak as one human being to another, looking to fine kindred spirits and good company." Ridgway and Cherry adopt this tactic in George Boleyn and it's very successful. If a reader finds a conversational tone grating or jarring, then this book mightn't be for them, but for many it's likely to prove, as the English say, a tonic - a refreshing and enjoyable change.

The lack of any surviving portraits of Boleyn or much in the way of letters and, crucially given the book's subtitle, his poetry, makes it difficult to flesh him out in too much detail, but both writers work with what has remained to paint a relatively convincing portrait of a headstrong but pious courtier with a passion for living and a solid mind. If George doesn't quite pop out as being as much fun as some might imagine him, it's a relief to see why he was nothing like the horror imagined in later fictional adaptations like Bring Up the Bodies or The Other Boleyn Girl. By shifting through all the available information and crucially being able to admit where Boleyn was guilty of hard-heartedness and even outright cruelty, Clare Cherry and Claire Ridgway are able to present a biography that is sympathetic without being hagiographic. Rather like the latter's website which has, wholly unjustly and in a spirit of sweeping reduction, been described as a Boleyn "fan site." Empathy is not a whitewash and sympathy or identification is not always a bad thing - as shown by beautiful biographies like Antonia Fraser's on Marie-Antoinette, Lauren Mackey's on Eustace Chapuys, William Shawcross's on Elizabeth Bowes-Lyon or David Starkey's on Elizabeth I.

There are a few flies in the ointment - I would have liked to see a bit more of how George has been reimagined in culture after his death. We have seen a pious George, George the buffoon, gay George, bisexual George, kind George, saintly George, George the rapist and an incestuous George. His afterlife is fascinating and it would have been nice to see a little bit more of that, but that's a personal preference and in a biography that seeks to liberate George Boleyn from the shackles of cultural history, perhaps a facetious and contradictory one.

All things considered, George Boleyn: Tudor Poet, Courtier & Diplomat is a gem of a book. Thoughtful, erudite, charming, passionate and clever, it helps set George Boleyn centre-stage and to paint a fascinating portrait of an aristocratic career that ultimately sailed too close to the Sun and paid a tragically unfair price for it.
Posted by Gareth Russell at 17:23