The House of Normandy: A Genealogy 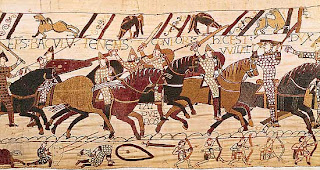 I've decided to do this before the start of each new dynasty in the Queens of England series, but only came-up with the idea after finishing the series on the House of Normandy, yesterday. Unlike the main chapters of this blog's series, which focus on the consorts, the genealogies will be structured on the regnal monarchs. It will basically be like a family tree, based on what research I was able to do into the lives, weddings, deaths and offspring of the royal families of my country.
The four-part series on the queens of the House of Normandy - The Friend of True Piety, Daughter of the Church, The Fair Maid of Brabant and The Other Queen - was a lot of fun to write and research. Next it will be onto the House of Plantagenet, with its first three potted queenly biographies being entitled How am I possible?, The Lion's Bride and The Uncrowned Queen of Ireland.

Sometimes known as "the Conqueror" or "the Bastard"
Son of Robert the Devil, Duke of Normandy and his concubine, Herleva


Born at the Château de Falaise in Normandy in approximately 1027
Died at the Abbey of Saint Gervais during the siege of Mantes on September 9th 1087
Buried in the Abbey of Saint Etienne in Caen
William I was married, whilst still Duke of Normandy, in the Cathedral of Our Lady of Eu, Normandy, sometime around 1051, to Matilda of Flanders, daughter of Baldwin V, Count of Flanders, and his wife, Adèle, Princess of France. Queen Matilda was born in Flanders in approximately 1032 and she died of natural causes in Caen on the Feast of All Souls, 1083. She was buried in the Abbey of the Holy Trinity in Caen (sometimes known as the "Abbaye aux Dames.")
The Issue of the Marriage of William the Conqueror and Matilda of Flanders: -
1. ROBERT, Duke of Normandy (?1052 - ?1134). He married Sybilla of Conversano and had issue.
2. RICHARD, Duke of Bernay (Killed in a hunting accident, ?1081)
3. CECILIA, Abbess of the Holy Trinity Abbey (d. 1126)
4. ADELIZA (1055 - 1066)
5. WILLIAM II, King of England (Also killed in a hunting accident, 1100)
6. CONSTANCE, Duchess of Brittany (d. 1190). She married Alan IV, Duke of Brittany.
7. ADELA, Countess of Blois (d. 1137). She married Stephen-Henry, Count of Blois, Brie, Chartres and Meaux, and had issue - including Stephen, King of England.
8. HENRY I, King of England (1068 - 1135). He married twice. Firstly to Matilda of Scotland, by whom he had issue. Secondly to Adeliza of Louvain.
9. AGATHA, Queen of Galicia and León (1064 - 1073). She was married in infancy to Alfonso VI, King of Galicia and León. There was no issue from the marriage, due to the bride's youth at the time of her death.
10. MATILDA (born and died young)
WILLIAM I was succeeded in Normandy by his eldest son, Robert, and in England by his third son, William.
***
WILLIAM II
(Reigned September 9th, 1087 - August 2nd, 1100) 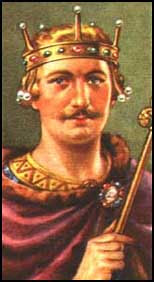 Sometimes known as "William Rufus"
Son of William I, King of England and his queen, Matilda of Flanders


Born in Normandy in approximately 1056
Died in a hunting accident in the New Forest, Hampshire, on August 2nd 1100
Buried in Winchester Cathedral
William II never married and there is no record of him ever producing any illegitimate children. He was succeeded by his younger brother, Henry.
***
HENRY I
(Reigned August 2nd, 1100 - December 2nd, 1135) 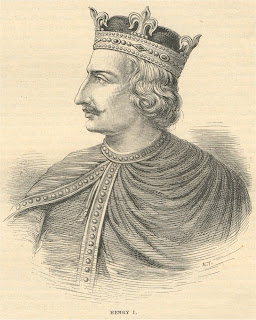 Sometimes known as "The Lion of Justice" or "Beauclerk"
Son of William I, King of England and his queen, Matilda of Flanders


Born in Selby, Yorkshire, in September 1068
Died of accidental food poisoning at St. Denis-le-Fermont, Normandy, on December 2nd 1135
Buried in Reading Abbey
Henry I was married at Westminster Abbey on November 11th 1100 to Matilda of Scotland, daughter of Malcolm III, King of Scots, and his queen, Margaret of Wessex (later canonised). Queen Matilda was born in Scotland in the autumn of 1180 and she died of natural causes at the Palace of Westminster on May Day, 1118. She was buried in Westminster Abbey. There was issue from the marriage of King Henry and Queen Matilda.
Henry I married for the second time at Windsor Castle on January 29th 1121 to Adeliza of Louvain, daughter of Geoffrey VII, Duke of Lower Brabant, Duke of Lower Lorraine and Count of Louvain, and his wife, Ida, Countess of Namur. Queen Adeliza was born in Brabant in approximately 1105 and she died whilst on religious retreat at Affligem Abbey in Brabant in the spring of 1151. There was no issue from the marriage of King Henry and Queen Adeliza.

The Issue of the Marriage of King Henry I and Matilda of Scotland: -

2. MATILDA, Holy Roman Empress, Queen of Germany, Queen of Italy and Lady of the English (1102 - 1167). She was claimant to the throne of England between 1135 and 1154. She married firstly to Heinrich V, the Holy Roman Emperor, King of Germany and Italy. She married secondly Geoffrey Plantagenet, Count of Anjou, with whom she had issue - including Henry II, King of England.


4. RICHARD. There is some confusion about this prince of the House of Normandy. Some historians have queried whether he ever existed at all; whilst others have argued that he lived into maturity and drowned in the same shipping disaster as his elder brother. Alison Weir in Britain's Royal Families has argued that this was the case, based on remarks made in certain chronicles of the time. Lisa Hilton in Queens Consort suggests that Prince Richard died as a baby and that the Richard who drowned as an adult was one of King Henry's illegitimate children.


Issue of King Henry's affair with Nesta, Princess of Deheubarth: -

vii. Henry FitzHenry (killed in battle in 1157). He married and had issue, but both sets of names are unknown.


Issue of King Henry's affair with a commoner called Edith: -


After the death of King Henry in 1135, his widow, Queen Adeliza of Louvain, subsequently married Lord William d'Aubigny, Earl of Arundel, by whom she had issue.

HENRY I was succeeded in a disputed succession by his nephew, Stephen. 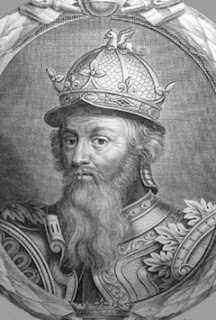 Son of Stephen-Henry, Count Palatine of Blois and Adela of Normandy, Princess of England


Born in Blois in either 1096 or 1097
Died of natural causes in Dover, Kent, on October 25th, 1154
Buried in Faversham Abbey, Kent. His tomb was destroyed during the English Reformation.
Stephen was married, whilst still Count of Mortain, at an unknown location in about 1125 to Matilda, Countess of Boulogne, daughter of Eustace III, Count of Boulogne, and his wife, Mary, Princess of Scotland. Queen Matilda was born in Boulogne in about 1105 and she died of natural causes at Hedingham Castle in Essex on the May 2nd 1152. She was buried in Faversham Abbey in Kent. Her tomb was destroyed during the English Reformation.
The Issue of the Marriage of Stephen and Matilda of Boulogne: -
1. BALDWIN (?1126 - died before 1136)
2. EUSTACE, Count of Boulogne (?1127 - 1153). He married Constance of France, later Comtesse de Toulouse. There was no issue of the marriage. During the last year of his life, Eustace bore the courtesy title of King of England, although he is not included in any regnal lists of the British monarchies since then.
3. WILLIAM, Earl of Surrey, Count of Boulogne and Count of Mortain (?1132 - Killed in battle in 1159). He married Isabelle de Warenne, Countess of Surrey.
4. MATILDA, Comtesse de Meulan (?1133 - 1141). She was married in infancy to Waleran de Beaumont, Comte de Meulan. There was no issue of the marriage, due to the countess's extreme youth at the time of her death.
5. MARY (1136 - 1182). She entered a religious vocation at Romsey Abbey, where she eventually became Mother Superior. Upon the death of her elder brother William in 1159, she inherited the province of Boulogne. Following this, she was kidnapped from the convent and forced to marry her abductor, Matthew, Count of Flanders. This marriage produced issue, who were allowed to remain legitimate in law when the Pope annulled the marriage in 1169. After this, Mary returned to her life as a Benedictine nun in the convent of Saint Austrebert in Merteuil, France.
Issue of King Stephen's liaison with a commoner called Dameta: -
i. Gervaise (?1115 - 1160). He entered a religious vocation and became Abbot of Westminster.
It is not likely that Stephen was the biological father of Gervaise's two brothers, Almaric and Ralph. Likewise difficult to substantiate is the story that the young Stephen was the father of Sybilla, future Countess of Wiltshire.
STEPHEN was succeeded by his second cousin, Henry, and with his death in 1154 the reign of the House of Normandy came to an end. It was replaced by the House of Anjou, sometimes called the House of Plantagenet.
Posted by Gareth Russell at 01:27