November 2nd, 1755: The Birth of Marie-Antoinette 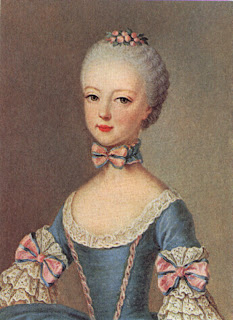 "Her Majesty has been very happily delivered of a small, but completely healthy, Archduchess."

On this day in 1755, the future Queen of France and Navarre, Marie-Antoinette of Austria (above), was born in the Imperial Apartments at the Hofburg Palace, Vienna. She was the fifteenth child and eleventh daughter of the Empress Maria-Teresa, the hereditary ruler of the Hapsburg dominions which then included most of modern-day Austria, Hungary, Slovakia, the Czech Republic, the Netherlands and Belgium, as well as parts of the former kingdom of Yugoslavia, Italy and Poland, and her husband, the Emperor Franz-Stefan, the elected leader of the Holy Roman Empire (comprising most of modern-day Germany.)
Since this was her fifteenth time undergoing labour, the Empress saw no reason for it to disrupt her work schedule. Up until the last minute, Her Imperial Majesty kept herself busy - reading government documents and signing state papers. And then, the moment her eleventh daughter had entered the world, the Empress returned to the business of government, requesting that some recent policy proposals be brought to her for inspection. It was half-past eight in the evening and the birth had taken place in the Empress's luxurious apartments on the first floor of the palace. Her husband, waiting outside, was delighted that both wife and baby were in good health. Whatever his faults - namely a taste for fine-living and pretty women - the Emperor Franz-Stefan was a wonderful father. Once he knew that everything had gone as expected, he dutifully made his way to the imperial chapel for a Te Deum service of thanksgiving for the safe delivery of the Empress and the new Archduchess. There, he was joined by the various members of the Court aristocracy who had been waiting in the palace's Mirror Room, as etiquette now required.
There was a slightly superstitious frisson at the fact that the baby princess had been born on the second day of November - the Feast of All Souls in the liturgical calendar - or, put crudely, the Day of the Dead. Every church, chapel and cathedral in Vienna was hung in black to remind people to pray for the poor souls in Purgatory - even in terms of a visual aesthetic, it was hardly an encouraging welcome into the world of the living for the Empress's latest child. These poor omens were only added to when news later arrived that on the very day of the birth, Lisbon, capital city of Portugal, had been hit by a devastating earthquake - one of the worst in European history - resulting in the deaths of 30,000 people. The King and Queen of Portugal, José the Reformer and his wife, Mariana-Victoria of Spain, were some of the new Hapsburg princess's godparents, which was again interpreted by some superstitious souls as a sign of bad luck. They had been fleeing their collapsing palace at the moment their Austrian god-daughter had been born.
Luckily, it was the custom for people to celebrate more on the feast of their chief patron saint in 18th-century Catholicism, rather than on their birthdays. This meant that the latest addition to the Hapsburg family would celebrate on June 13th, rather than the grim November 2nd, since June 13th was the Feast Day of Saint Anthony of Padua (one of the patron saints of Portugal and probably one of the reasons why the baby was named in his honour, given that her godparents included the King and Queen of Portugal.) As with most of the Hapsburg girls for the last two centuries, the baby's first name was given in honour of the Virgin Mary, whom the Austrian imperial family was especially devoted to; subsequent names were then added in honour of Saint Anthony, her Portuguese godfather and Saint John the Evangelist. Thus, the new baby formally presented at the Church of the Augustine Friars for baptism into the Christian Faith on the following day was Her Imperial Highness the Archduchess Maria-Antonia-Josefa-Johanna von Hapsburg of Austria, Alsace and Lorraine.
The christening itself took place in the church's latest addition, a beautiful ante-camera, which can still be seen today, with two of the baby's elder siblings - Josef and Maria-Anna - standing in for the Portuguese king and queen who, naturally, could not be expected to travel all the way from Lisbon for the ceremony. Although they were amongst the eldest of the Emperor and Empress's children, it's my hunch that Josef and Maria-Anna were picked to stand proxy because they conveniently also had the same Christian names as the King and Queen of Portugal. With the exception of the Empress, who was still in seclusion, the Imperial Family sat on a pew near the font, where Maria-Antonia was christened by the Archbishop of Vienna, Cardinal von Trautson. Where possible, the Empress preferred to have the children baptised by the Papal Nuncio, however the new nuncio, Cardinal Visconti, had not yet been formally presented at Court and was therefore ineligible to perform the ceremony.
Sitting in the pew, before the eyes of the Court, Church and military, little Maria-Antonia's bevy of brothers and sisters made an impressive show of imperial fecundity.They were living proof that all was well within the House of Hapsburg and that the common criticism that the family was debilitatingly inbred did not apply to the Austrian branch of this formidable clan. Several of Maria-Antonia's siblings had predeceased her and, at the time of her christening, eleven of the children remained alive. Apart from 14 year-old Josef, the crown prince, and 17 year-old Maria-Anna, an intelligent girl with a crooked back who had already decided on a vocation as a nun in Prague,  the imperial siblings congregated in the Augustinian Church on that chilly November afternoon included Maria-Antonia's six other sisters - their mother's favourite, Maria-Christina, the family beauty, Maria-Elisabeth, the impetuous Maria-Amalia, 5 year-old Maria-Johanna, 4 year-old Maria-Josefa and the toddler, Maria-Caroline, destined to be Marie-Antoinette's favourite sister and childhood playmate . They were joined by their three brothers, all junior to Josef in the line of succession; 10 year-old Karl, 8 year-old Leopold and the baby, Ferdinand.

Several galas were held in Vienna on the day of the christening and the three days immediately after it to mark the Archduchess's birth and muted festivities were likewise held in Budapest and Prague, the empire's other major cities. However, given that the child was not only a girl but the youngest of a veritable tribe of them, celebrations were hardly extravagant. The 38 year-old Empress, in the meantime, was back to the business of government and making the by-now de rigeur procedures to establish a household for her newest daughter. A wet nurse with impeccable references was chosen in the shape of a respectable Viennese housewife and mother called Constance Weber and it was decided that Maria-Antonia should share a governess, Countess von Brandeis, with Ferdinand and Maria-Caroline, the two siblings closest to her in age. When a sixteenth and final child arrived in the form of their baby brother, Maximilian, a year later, he too was placed (briefly) into the countess's care. As boys, however, Ferdinand and Max's education could not be left too long in the hands of the indulgent governess, who insisted on impeccable manners from her charges, but otherwise let them run free after lessons which consisted of basically nothing more than painting, singing and dancing. Like their elder brothers, Ferdinand and Max would soon be sent to a male governor, who, from the age of seven, would shape the young archdukes for future careers either on the throne, in the army or in the church. Maria-Caroline and Maria-Antonia, meanwhile, would be left under the countess's soft control until the time came for the Empress to find them a husband. Years later, the Abbé de Vermond, a cleric sent from Versailles to prepare the young Maria-Antonia for marriage into the French Royal Family, was quite clear that Maria-Antonia's natural aptitude had been wasted by countess von Brandeis's indulgent curriculum: -

"She has a most graceful figure; holds herself well; and if (as may be hoped) she grows a little taller, she will have all the good qualities one could wish for in a great princess. Her character, her heart, are excellent.... She is much more intelligent than is generally supposed. Unfortunately, up to the age of twelve, she has not been trained to concentrate in any way. She is rather lazy and extremely frivolous; she is hard to teach. During the first six weeks, I inculcated her with the elements of literature, and found that she understood me very well when I gave her proper explanations. Then, she usually manifested a very sound judgement ..."

Intellectually wasted by her childhood, Maria-Antonia at the very least learned all the accomplishments which the old world expected for its young princesses - she walked with great elegance, carried herself perfectly, had a pleasing smile and a soothing voice, she was always pleasant and polite to servants, she had a fine soprano singing voice, danced very well and she had a talent for the arts and an eye for colour. It was only as an adult that she was to complain that her mother had not assigned her tutors for subjects like languages or History. Things that now seem like staples of the educational diet - such as mathematics, economics or science - were considered a complete waste of time for women (and most men) of the aristocracy and indeed, to be fair, all things considered they probably were useless in comparison to literature, art, history and theology all of which informed the main ways in which the world defined itself and all of which, then as now, were far more likely to crop up around the dinner table as topics of conversation than subjects like mathematics or medicine.
Throughout her life, Maria-Antonia was to carry a profound veneration of her awe-inspiring mother, who was probably the most powerful female monarch in European history, after Elizabeth I of England. Whether or not she actually loved her, in the sense we would understand a mother-daughter love, is impossible to say. There is one cryptic comment she allegedly made to her lady-in-waiting, Madame Campan, in her early thirties, which suggests that what she felt for her mother was much closer to respect, if not fear, rather than actual love. All this is purely speculative, however; she was raised in a very different school of thought, where class and elegance were considered much more important than emotions or neuroses. To have publicly criticised her mother, let alone insult or impugn her, would have been an abhorrent and alien concept to the future Queen of France. Such things, quite simply, were not done.
We are, however, on much firmer footing with how she felt about her father, Franz-Stefan. She unashamedly adored him. Approachable, affectionate and indulgent, the Emperor was very much the parent who spoiled the children, whereas the Empress offered the disciplinarian side of things to all of the children, bar her beloved pet, Maria-Christina - much to the other children's chagrin. Born and raised in Alsace-Lorraine, Franz-Stefan's native language was French, not German or Italian, like most of the Austrian nobility. It was still the language he preferred to speak and write, even when discussing his numerous children, and so it was Franz-Stefan who first began to refer to his youngest daughter by the name by which she would be best known to both history and legend - Marie-Antoinette.
Posted by Gareth Russell at 01:27