The Other Queen: The Life of Matilda of Boulogne, Queen of England 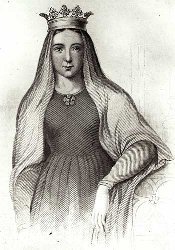 "In many ways, Matilda of Boulogne was a model consort. As a regent, diplomat, warrior, counsellor and mother, she occupies a position alongside her predecessors Matilda of Scotland and Matilda of Flanders, at the apogee of English queenship, after which many historians concur that the power invested in the office began to decline ... Matilda's husband is one of the great, if misunderstood, failures of English kingship. Matilda herself, though, was never anything less than a great queen." 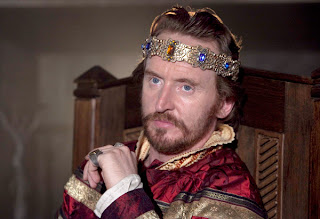 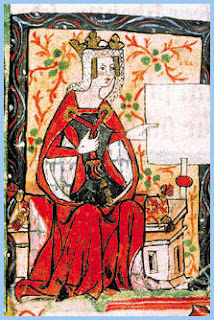 As the Empress (left) sat stunned, devastated and pregnant in Anjou, it seemed that Stephen had won and won completely. In the immediate aftermath of the coup of 1135, the new King could get on with the business of ruling, whilst the Queen settled into her new position as first lady of the Royal Court. Maud seemed like an irritant, not a dilemma. The couple were soon joined by their fifth and final child, Mary, born in the year after her father’s accession to the throne.
In every way apart from their rather unsavoury seizure of the throne, Stephen and Matilda were the ideal medieval royal couple. Stephen was a brave warrior, handsome, physically fit and devoted to the rules of chivalry; Matilda, whilst not beautiful, was dignified, tactful, gracious and intelligent. Both of them were also faithful to their marriage vows – expected in a queen, but truly remarkable in a king. Prior to his marriage, Stephen had enjoyed a long-term relationship with an unmarried commoner in Normandy, which had resulted in the birth of an illegitimate son called Gervaise. After marrying Matilda, Stephen had immediately broken-off this affair, but he had honourably continued to maintain his former lover, meet her bills and help their son where and when appropriate. After marriage, there were no more mistresses. Stephen took the fidelity clause in his marriage vows very seriously, in stark contrast to his late uncle, who had fathered over two dozen illegitimate children with a string of mistresses during the course of his two marriages.
Aside from being devoted to each other, Stephen and Matilda were also devoted to God. Both were the products of deeply pious upbringings – Stephen’s father had died on Crusade, his mother was active in founding religious houses and preparing reliquaries to house the relics of the saints; Matilda’s father had spent the last years of his life as a Cluniac monk and her mother had insisted that Matilda receive a convent education in England. A loving veneration for Christianity was thus something which Stephen and Matilda wove very much into their lives as a couple and as parents. Both were entranced and moved by the twin extremes of medieval piety – on the one hand, the gorgeous theatrical opulence of “high church” worship; on the other, the self-mortifying asceticism of hermits and the emergent anchorite movement. They co-funded the foundation of monasteries and nunneries linked to new, radical continental religious orders. They gave generously to both the Cluniac and Cistercian orders and helped fund the import of the Savignac religious movement to England, paying for the intensely strict monastic sect to establish monasteries in Essex, Lancashire and Devon. Independently of her husband, the Queen regularly went on religious retreat to Holy Trinity Aldgate, which had been founded by her late godmother and aunt, Matilda of Scotland, in the heart of London. She was also an enthusiastic patron of the Templar Knights, a group of warrior-monks who protected and partly financed the goals of the Crusades. Inspired by their mission statement, Matilda paid for the foundation of temples for the order in Essex and Oxfordshire, during which time she struck up a close friendship with the Templars’ Grand Master. As the historian David Crouch noted in his biography of her husband, Matilda’s devotion to the Knights revealed a deep and hidden zeal in the queen’s heart for a more militant form of Christianity: ‘If she could not lead the knights of Christ against the enemies of the Church, she could at least provision them.’ Impressed by her piety, the future saint Bernard of Clairvaux (below), a man so utterly devoted to the Virgin Mary that he became known as her troubadour, wrote to Matilda describing her as ‘the glory of your kingdom’. 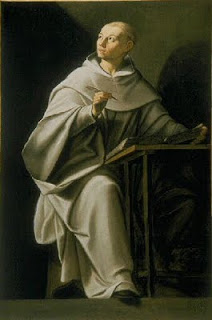 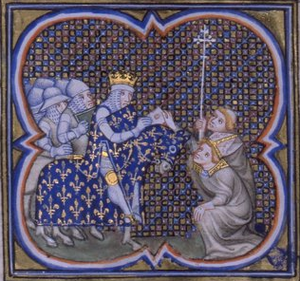 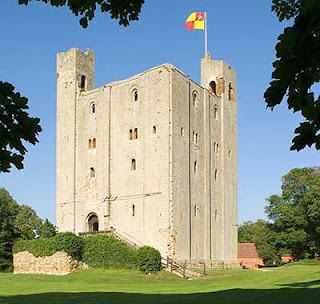 Hedingham Castle - the site of Queen Matilda's death
In the aftermath of the magnates’ oath, an exhausted Matilda took some time off to spend a short holiday at Hedingham Castle (above), the home of one of her closest friends, Euphemia, Countess of Oxford. There, the Queen and Lady Euphemia enjoyed the spring weather before, suddenly, the Queen’s health collapsed and her confessor, Prior Ralph, was summoned from the Priory of Holy Trinity Aldgate. What exactly killed Matilda of Boulogne is a mystery, given the paucity of medieval records; we do not even know how long her health had been affected and if her visit to Hedingham was designed to give the Queen some time to recover from her illness in the company of a friend. As it was, there was just enough time for Prior Ralph to make it to Hedingham to deliver the Last Rites before Matilda, Countess of Boulogne and Queen of England died on May 3rd 1152. She had not yet reached her fiftieth birthday.
Stephen and Eustace were both devastated by her death and even those who had opposed her husband’s kingship could publicly mourn the late queen’s death. In the course of her political career, she had exhibited great dignity and charm, as well as magnanimity, diplomacy and mercy. She was also commendably and determinedly loyal to her immediate family, as well as intelligent, devout and one of the greatest political and diplomatic negotiators of the 12th century. Yet, there can be little doubt that Matilda of Boulogne colluded in a coup of doubtful legitimacy and became one of its greatest supporters and figureheads. Her actions and, more specifically, those of her husband, were eventually to destroy not only their own lives, but that of their children and thousands of their subjects also. That she may actually have believed in Stephen’s destiny to be king, rather than Maud’s, is entirely possible – after all, she had gladly acquiesced to Stephen ruling Boulogne in her name on precisely the same grounds that she had supported Maud’s exclusion from the English throne. Their gender. Maybe she did genuinely believe that Stephen’s gender made him fit to rule over both her inheritance and Maud’s. Maybe she believed in the divine origins of the hermit’s prophecy. Or maybe, like so many of us, she could persuade herself she believed all these things because it was to her advantage to do so. Alas, we shall never know.
As a character and even as a politician, Matilda was undoubtedly preferable to her cousin Maud, but a terrible decision had been made – or rather, made for her – when Stephen seized the throne upon his uncle’s death. After 1135, there was no escaping from the fall-out of the usurpation. Like the sword of Damocles, the consequences of it overshadowed the rest of Stephen and Matilda’s life. No wonder then that, at times, the queen seemed to seek refuge in prolonged religious retreats or country house visits far-away from court. By the time of her death, she was certainly an exhausted woman.
In the end, as Matilda had feared, it all had been for nothing. Nature conspired to assist politics in destroying forever the ambitions of Matilda’s family. Her eldest son Eustace died fourteen months after his mother, aged about twenty-three. Strong-willed but far less popular than either of his parents, Eustace’s death was greeted with ill-disguised relief by most of his compatriots. For providentialists, it seemed as if God had saved the monarchy from a second generation of crisis by striking the rival claimant down and paving the way for the Plantagenets to take the throne. Only Maud’s son Henry now remained as a serious candidate for the succession. There was nobody else left. The civil war would not return. Stephen now had nothing left to fight for and three months after his son’s death, he signed the Winchester Agreement. Under its terms, Henry was recognised as the uncontested heir to Stephen’s throne; Stephen could hold the crown until his death and his only surviving son, William, would be well provided for. It was all a very quiet end to a bloody family conflict. The only victory Stephen could now claim was that he had managed, at the last, to keep the crown out of the hands of Maud. Like Eustace, she would never wear it either.
Eleven months later, in the town of Dover, the King’s bowels began to haemorrhage. The Archbishop of Canterbury and Matilda’s old confessor, Prior Ralph, rushed to the dying monarch’s bedside, where he passed away on October 25th 1154. His body was conveyed to Faversham Abbey, an institution which he and his queen had founded, as they had founded so many. There, Stephen of Blois, sometime King of England, was laid to rest next to his son, Eustace, and his queen, Matilda of Boulogne, described by one contemporary as having shown the astuti pectoris virilisque constantiae femina – ‘the virile courage of a man, the loyalty of a woman’. Whatever else one might think of her husband’s claim to the throne, Matilda of Boulogne was one of the most energetic and gracious of England’s medieval queens.
© Gareth Russell

***
Recommended Further Reading
Queens Consort: England’s Medieval Queens by Lisa Hilton
The Reign of King Stephen by David Crouch
The Empress Matilda by Marjorie Chibnall
Letters of the Queens of England edited by Anne Crawford
Noblewomen, Aristocracy and Power in the Twelfth Century Anglo-Norman Realm by Susan M. Johns
(Fiction)
When Christ and His Saints Slept by Sharon Kay Penman
The Pillars of the Earth by Ken Follett
Posted by Gareth Russell at 19:40