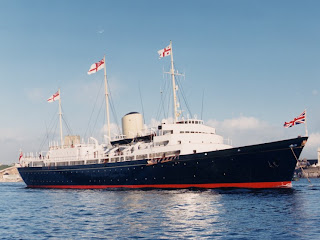 In the wake of revelations this week which show that the overall cost of the monarchy has actually decreased in 2010-2011 by 5.3%, that it's often cheaper to run than the American presidency and that the Prince of Wales is now living almost entirely independently from government funds (H.R.H draws his sizable income from the lands, farms and luxury food industries he has developed in his duchy of Lancaster, the traditional demesne of the heirs to the throne), one royal subject is anything but pleased to hear that the monarchy is now run on such a tight budget.

Over on his blog, Lord Belmont in Northern Ireland, Lord B defends royal expenditure in Britain and argues that the former royal yacht, Britannia, currently a floating museum in Scotland, should be re-commissioned as a private royal yacht (it served in that capacity from 1954 to 1997 and despite being technically sound, it was retired following the election of the Labour government in 1997.) Belmont also believes that more money, not less, should be pumped into the monarchy to re-vitalise royal travel, improve its safety and fund the restoration of various palaces as an act of State.
Posted by Gareth Russell at 17:52