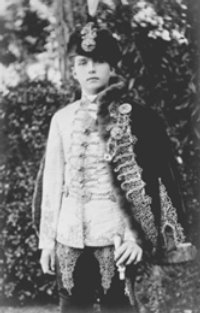 I was saddened to hear today of the death of His Imperial and Royal Highness Crown Prince Otto of Austria, Hungary, Croatia and Bohemia. His Imperial Highness was the eldest son of the last Emperor of Austria, to date, Karl I, who ruled the Austro-Hungarian Empire during its final traumatic years from 1916 to 1918. Despite Karl's heroic attempts to end the carnage of the First World War, the chaos and unrest which swept Europe in 1918, coupled with American hostility to the idea of negotiating with a semi-absolute monarchy, eventually swept the Hapsburgs off the throne they had held for nearly eight centuries and their vast empire disintegrated into eleven smaller nations and a generation of instability. Karl, his wife Zita and their children, including six year-old Otto, were banished and despite various attempts to restore the monarchy in Hungary, Emperor Karl died in exile on the Portuguese island of Madeira in 1922. His widow, now Dowager Empress, endured an extraordinarily long widowhood, dying in 1987. In recognition of the late emperor's devotion to the cause of peace, his abhorrence of violence and the strength of his devotion to the Christian faith, he was beatified by Pope John Paul II in 2004.
In deference to the politics of the time, Otto, who was ten years old when his father died, chose not to adopt the title of "emperor" in exile and instead settled on being referred to as Crown Prince, showing that he very much considered himself to be an emperor-in-waiting. He relied very much on his close relationship with his mother and his large brood of siblings, all of whom showed characteristic Hapsburg determination in carving out new lives for themselves in the modern era. The Crown Prince's younger sister, Archduchess Charlotte, for instance, became a welfare worker in East Harlem.
Like most of the Hapsburgs, and especially his mother, Crown Prince Otto was a strident opponent of Nazism and was forced to evacuate most of his family to the safety of Canada during the Second World War, when his refusal to endorse the Nazi occupation of Austria and his repeated attempts to smuggle Jews out of Nazi territory, lead to the entire imperial family finding themselves on Hitler's list of enemies. A dangerous position to be in the 1930s. After the Second World War, through his opposition to what he saw as the dangers of excessive patriotism and nationalism, the Crown Prince was an early supporter of European co-operation in the form of the European Union. He was eventually elected as a Member of the European Parliament and in that capacity once famously punched another MEP in the face. His target was the Rev. Dr. Ian Paisley, the hard-line Protestant politician from Northern Ireland and founder of the Free Presbyterian church, who began heckling the Pope during his visit to the Parliament in 1988, denouncing him as "the Anti-Christ." Furious at this breach of the rules of parliamentary etiquette, the Crown Prince, a devout Roman Catholic, turned round and allegedly smacked Rev. Paisley square in the face, whilst other delegates hustled him out of the room and the Pope looked on bemused and, I suspect, a little amused.
The Crown Prince married in 1951 to Princess Regina of Saxe-Meiningen but the young royal couple were forced to start their married life in Germany, since Otto and all members of the imperial family were still forbidden from re-entering Austria by the republican government. Crown Princess Regina gave birth to seven children and, fifteen years after they were married, they were able to see Austria again when Otto was finally issued with an Austrian passport. In order to return to Austria, he was forced to describe himself as " a loyal citizen of the republic," a move which many in his family found abhorrent. Otto himself later bitterly regretted the decision and felt it might have been one act of conciliation too many. He would one day describe his decision to acknowledge the legitimacy of the republic as "an infamy". At the time, nervous about the survival of pro-monarchy sentiment in Austria, the Crown Prince's return to his homeland had been fiercely opposed by the Socialist Party.
In later life, Crown Prince Otto was active in working for the Three Faiths Forum, which encourages good will and co-operation between Christianity, Islam and Judaism. A strong opponent of what he saw as rampant secularism and neo-atheism, the Crown Prince was also a prominent figurehead in organising opposition from within Austria to the Communist dictatorships on her eastern borders in the 1970s and 1980s. After reaching the grand old age of ninety-five, His Imperial Highness resigned as Head of the House of Hapsburg and passed the duties over to his eldest son, Archduke Karl, in 2007.
The late Crown Prince, who was a widower following the death of his wife, Regina, last year, died at his villa in Germany today. He is survived by his seven children - Archduke Karl; Archduke Georg, who is currently President of the Red Cross in Hungary; Andrea, countess von Neipperg; Monica, Duchess of Maqueda-y-Santangelo; her twin sister, Michaela, countess von Kageneck, a jewellery designer and historian; Archduchess Gabriella, an art historian and diplomat who is currently the ambassador of Georgia to Germany and the youngest of his daughters, Countess Walburga Douglas, who serves on the Institute for the Information on the Crimes of Communism. The late Crown Prince is also survived by twenty-three grandchildren. Had Otto von Hapsburg actually ruled between the time of his father's death in 1922 and his own "abdication" in 2007, he would have been the longest reigning monarch in European history, outstripping the current record holder, Louis XIV of France, by thirteen years. 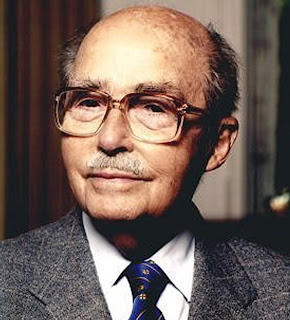 Like so many of the Hapsburgs, Crown Prince Otto was a man who actually made a life as a statesman and it is sad to think that politicians by conviction, rather than by career opportunism, are more and more a thing of the past. Unlike many monarchists, the would-be monarch managed to combine a belief in the values of the past with a pragmatic and positive interpretation of modernity. One of my favourite anecdotes about him comes from the 1930s, when friends of an exiled Austrian artist who was a stalwart monarchist contacted Otto to inform him that their friend was slowly dying as a result of his alcoholism. They had tried everything else and they felt that only the man's devotion to the Hapsburgs could possibly trump his devotion to liquor. Otto summoned the man and drawing himself to his full height, he barked at him that he was his emperor and, as such, commanded him to quit drinking. Through the haze of drunkenness, the writer bowed low before Otto and vowed to do just that.
It was an extraordinary life, but, had events been kinder, it could, and should, have been so much more.
Posted by Gareth Russell at 18:44