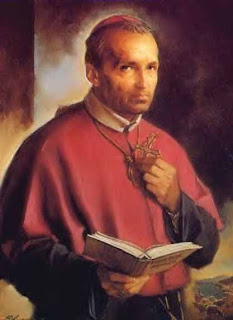 Canonised in 1839 by the conservative Pope Gregory XVI, Saint Alphonsus (or Alphonso) de Liguori is today revered as a Doctor of the Roman Catholic Church, due to his skill in philosophy and his devotion to Mariology (the veneration of the Blessed Virgin Mary.) Saint Alphonso de Liguori is also the patron saint of the Naples, arthritis sufferers, confessors and moralists.

Born in a suburb of the Naples in 1696, when the entire southern Italian peninsula was still ruled by the Spanish, Alphonso was born into a well-to-do family of the local aristocracy. His father was an officer in the navy of the Spanish king, Carlos II. The eldest of his parents' seven children, he was christened at a nearby church devoted to the Virgin Mary, which was appropriate given his later devotion to her. Like many future saints, Alphonso's initial academic interests seem to have been with law. He qualified and was a very successful lawyer, but not a happy one. In a private letter to a friend, he reflected that a solicitor's life was a "too full of difficulties and dangers; we lead an unhappy life and run risk of dying an unhappy death. For myself, I will quit this career, which does not suit me; for I wish to secure the salvation of my soul." At twenty-seven, Alphonso re-trained as a priest with the Oratorian order and once he was ordained, he spent the first few years of his ministry working with the homeless, particularly the young, in Naples.

This early experience gave Alphonso de Liguori a passionate belief in the role the young should play in the church. With their help, he set up evening chapels, where the worship and service was led by the young people themselves. Here, Alphonso would deliver his sermons, which were apparently particularly effective at bringing young people back to their faith when they had become disillusioned with it. In time, seventy-two of these youth chapels would have been set-up across the Italian peninsula. Often appalled at the level of poverty in the Naples, Father de Liguori sometimes undertook missions to alleviate rural poverty, as well.

As his reputation grew, Alphonso also threw himself into the great theological debates of the era. At that time, Catholicism was being divided over the issue of a philosophy known as Jansenism. Jansenism was a form of Catholicism that had originated in France in the previous century and it drew heavily on the philosophy of the more extreme Protestant sects. Whilst it emphasised Catholicism's belief in original sin and human weakness, it also adopted the radical Protestant belief in pre-destination and denied the impact of Free Will. This led many to regard Jansenism as heresy. It was seen by many to be too harsh because it combined the worst elements of both strands of Christianity - Catholicism's belief in the innate sinfulness of humanity, with radical Protestantism's belief that there was nothing you could do to save yourself from it. With the help of his friend, Sister Maria-Celeste, Alphonso set-up a new Catholic faith organisation called the Congregation of the Most Holy Redeemer, which combined two of Alphonso's great passions - to alleviate the suffering of the poor and to challenge Jansenism.

For the next few decades, the work of the Congregation of the Most Holy Redeemer consumed Alphonso de Liguori's life and in 1762, when he was sixty-six, he was made Bishop of Sant'Agata dei Gioti by Pope Clement XIII. As bishop, he kept up the work he had started with the Congregation and worked hard to eradicate poverty in his diocese. He also pursued his interest in theology, by publishing many books including Moral Theology (which was his great attack on Jansenism), The Great Means of Prayer, The Practice of the Love of Jesus Christ, Visits to the Most Holy Sacrament and his series promoting devotion to the Virgin Mary - The Glories of Mary, Marian Devotion, Prayers to the Divine Mother, Visitations to the Blessed Sacrament and the Divine Mother and Spiritual Songs. In total, Alphonso wrote over one hundred works of theology, as well as numerous hymns, some of which are still sung today. His books were aimed at ordinary Catholics and he sought to encourage them to engage emotionally with their faith, rather than be seduced away from it by the scientific rationalism that was being promoted during the 18th century by the "Age of Enlightenment." Within Catholicism, Alphonso was sometimes criticised by his fellow theologians, who either saw his promotion of Marianism as over-zealous (particularly in his repeated references to the Immaculate Heart of Mary, which led to his books being briefly banned in some Catholic municipalities, like Venice) or for being too emotional and "crowd-pleasing." Some of his opponents were harsh in their criticism of him; others, like the Dominican pastor, Vincenzo Patuzzi, simply respectfully disagreed with his take on how central Mary should be to Catholicism.

In his old age, Bishop de Liguori resigned his post and went into retirement, living with a community of Redemptorist priests in Campani. He died there on 1st August 1787, at the age of ninety. By that point, his homeland of the Naples was an independent kingdom, ruled over by King Ferdinand IV and his wife (Marie-Antoinette's sister), Queen Maria-Caroline. Alphonso died only two years before the outbreak of the French Revolution, which was to seriously threaten and then, through the strength of its persecution, rejuvenate the pastoral, grass-roots Catholicism that Alphonso was so devoted to.

He was beatified by Pope Pius VII in 1816 and formally canonised as a Roman Catholic saint in 1839. Pope Gregory XVI, anxious to turn back the hands of time to the days before the Revolution and impressed, like many were and are, by the extent of Alphonso's holiness, was a keen champion of the canonisation of Alphonso de Liguori. Today, he is buried in the Basilica of Sant'Alfonso in Pagina, Italy.