"Popular" coming to the States!

I'm very excited that my first novel, Popular, will soon be available to order in the US! It'll be up on Amazon with a brand new cover, tagline and a special fun vocabulary section at the back. The brand new cover, designed by my publishers at MadeGlobal, will also be replacing Popular's old cover in the UK, Ireland and overseas. This is to mark Popular moving to MadeGlobal and in preparation for the release of its first sequel, The Immaculate Deception, which follows the same characters in the summer and winter after Popular.

I'll be posting more news about the books and where they can be ordered, soon, but thanks so much to all this blog's American readers and I hope you can order, and enjoy, Popular and The Immaculate Deception. Working on them, and with my new publishers, has been a great joy. 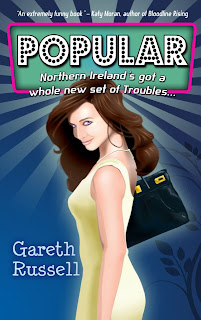 On the first day of September, 16 year-old Meredith Harper rules over the teen it-crowd of Belfast, Northern Ireland. But beneath the surface, Meredith's complicated web of manipulative lies and self-serving intrigues are slowly beginning to threaten her social position and she finds herself being challenged by the handsome Mark Kingston, the only guy in the school who's always hated her.

In a world where nothing stays secret for very long, Meredith and her friends will need all their skills to guess who's in, out, coming out, going up, going down, dating, cheating, lying and trying to cope...