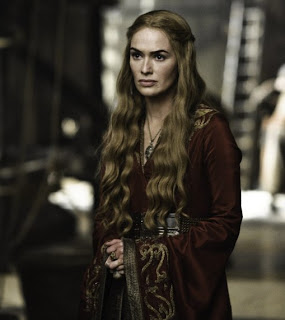 In short, the answer from me is an emphatic "no," but it's a popular theory doing the rounds in articles about an even more popular show. Cersei Lannister, the queen consort of the fictional land of Westeros in G.R.R. Martin's epic Song of Ice and Fire novels, is a magnificently unpleasant individual. Those novels have recently been adapted into the television series Game of Thrones, in which Cersei is portrayed by British actress Lena Headey (above.) The only daughter of the wealthiest aristocratic family in the Seven Kingdoms, the gorgeous Cersei is married to the bloated King Robert, but harbours an incestuous passion for her twin brother, Jaime, and an insatiable ambition for herself and her children. Manipulative, duplicitous, head-strong, vindictive and cruel, Cersei is blind to her own faults and those of her sadistic eldest son, Joffrey, who she pushes on to the Iron Throne, despite the fact that it is quite clear to everyone but her that he is totally unsuited to commanding anything more challenging than a boar hunt. Her clumsy attempts to manipulate the rival Stark family, headed by an on-screen Sean Bean, and her failure to properly manage Joffrey, provide much of the drama for the first season of Game of Thrones. The actress who plays Cersei reflected how her character's greatest weakness was that she considered herself to be a masterful political operator, when in fact she was often ruled by short-term vindictiveness rather than long-term strategy. Indeed, the show starts by showing the funerary rites of Westeros's former chief minister, Jon Arryn, while Cersei and her brother watch from a balcony above, discussing in (thinly) veiled terms why Arryn died because Cersei "worried too much" about what he knew. A brilliant femme fatale, Cersei Lannister is a fantastically compelling, if hideous, character, whose amoral schemes help shape most of Game of Thrones' best story-lines. 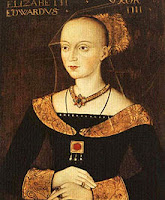 The broad story of Game of Thrones - that of rival aristocratic clans locked in bloody conflict as each try to claim the throne for themselves - bears more than a passing resemblance to England's fifteenth-century Wars of the Roses. Henry VI suffered a spell of madness and in 1461 he was overthrown by a distant cousin, Edward of York, who took the throne as Edward IV; in Game of Thrones, the "mad king," Aerys II, is killed and then replaced by a distant kinsman, Robert Baratheon, who then goes on to marry Cersei Lannister, a stunning beauty who is said to be the most beautiful woman in the Seven Kingdoms. Back in fifteenth century reality, in 1464 Edward IV married Elizabeth Woodville, said to be the most beautiful woman of her generation in the entirety of the British Isles. Both the factual Edward and the fictional Robert then went to seed - losing all of their youthful muscles by whoring, eating and drinking their way into an early grave. Both Cersei and Elizabeth were pale and beautiful blondes and the product of good-looking families, who they did everything in their power to promote to the detriment of every other noble family in the country. In the aftermath of Edward's premature death in 1483, Elizabeth tried desperately to secure her son's inheritance of the throne, in the face of mounting aristocratic opposition. There has therefore has been rampant internet speculation that Robert is based loosely on Edward IV and Cersei on Elizabeth Woodville.

It would be wrong and foolish, of course, to suggest that Game of Thrones is really nothing more than a fantasy-genre version of the Wars of the Roses. In the first place, George Martin is far too good a writer to do that - Westeros and the world it exists in are probably the most believably-complex fictional lands created since Tolkein put pen to paper and first created Middle Earth. In the second instance, Game of Thrones is actually almost more complicated than the real war. At its height, the Rose conflict was only being contested by two rival families - the Lancasters, the Yorks and, at the tail end of things, the Tudors. In Song of Ice and Fire / Game of Thrones, there are multiple royal claimants - including the exiled children of the dead "mad king," the new king and his alleged family, aristocratic families seeking secession for the northern provinces, the two rival brothers of the new king (overtones of the Duke of Clarence and Richard III? Who knows?) and foreign princelings. Finally, there are enough glaring differences in the narrative, let alone the specifics, to suggest that Game of Thrones is far more a work of fiction than an allegory of real-life events.

However, there are also enough similarities to suggest that the Wars of the Roses may, sometimes, have been used as inspiration for the story of Game of Thrones - particularly in the case of Cersei and Elizabeth Woodville. (It's perhaps worth noting that at no point in history was Elizabeth ever accused of committing incest with her brothers, in the way Cersei is in Game of Thrones.) However, both women were famed for their beauty and loathed for their alleged penchant for intrigues. Both were far less capable at politics than they liked to think and both badly mishandled their enemies. Both Elizabeth and Cersei were totally blinkered in their desire to promote their own lineage, at whatever cost - Elizabeth supported the disinheritance of the Howard family, in order that her youngest son, Richard, could be given their cousin's title and estates; she also caused a scandal by marrying her 20 year-old brother, John, to the 69-year-old Catherine Neville, a fantastically wealthy duchess, whose connections would help the Woodville family and whose marriage to John also had the added benefit of helping Elizabeth disinherit her enemy, and the duchess's nephew, Lord Warwick.

There are admittedly a significant number of differences, beyond the fairly obvious one of incest.  Robert and Cersei's marriage was a political one; Edward and Elizabeth's, for all its faults, was a love match. Cersei is shown as being murderous in Game of Thrones, while the only way Elizabeth Woodville could ever have been accused of homicide was by those inclined to believe the worst of her - since there is absolutely no evidence whatsoever that she ever resorted to poison, assassinations or witchcraft to achieve her goals. Despite her general unpopularity, Elizabeth Woodville was never accused of adultery; although both women were eventually to face the horror of having their children's legitimacy impugned. Although both were married to once-handsome-now-fat monarchs, Elizabeth never seems to have harboured the revulsion towards Edward IV that Cersei cannot quite hide holding for King Robert. In the novels and the television show, the Lannister family are one of the most respected and feared families of the Westeros nobility; Elizabeth's family, the Woodvilles, were considered social-climbing upstarts, pigging-back on their daughter's incredible beauty and equally jaw-dropping greed. (Elizabeth's mother, Jacquetta, was actually related to the royal family by marriage, but that point was conveniently ignored by Elizabeth's many, many detractors.) 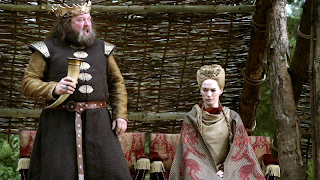 There are a sufficient number of similarities between the personalities (and perceptions) of Cersei Lannister and Elizabeth Woodville to see why people think the story of Elizabeth might have helped inspire the story of Cersei. It might, I think, be more tempting to say that Cersei Lannister is in many ways the dark legend of Elizabeth Woodville - at its darkest. Despite her bad press, Elizabeth Woodville was almost certainly a far more pleasant individual than Cersei Lannister is, even on her best days. However, the complexities and nuances of Cersei's character are far more of a tribute to the skill of G.R.R. Martin as a writer than to the enduring fascination of Queen Elizabeth's personality. If part of the Game of Thrones was inspired by the Wars of the Roses, then that's not quite the same thing as saying it's based on them. As an historian the really exciting thing about Game of Thrones is not what conflicts it's based on, but rather that it can remind us of the reality of the human historical experience. We are so used to the story of history that we become numb to it. Familiarity breeds indifference. We know the ultimate fate of Elizabeth Woodville's sons; we know the grizzly death waiting for Edward IV's disloyal brother, the Duke of Clarence; we know that Elizabeth of York will die in childbirth, Anne Boleyn will lose her head and that Henry VIII will marry six times. We know all of these extraordinary facts so well that we lose the ability to be shocked by them and we therefore lose the ability to fully appreciate how nerve-wracking and uncertain it must have been to actually live through those times. Since Game of Thrones is not history, but incredibly manages to be as believably complicated and unexpected as any historical era, it not only becomes to be a phenomenal story but can also remind even the most jaded of historical enthusiasts of the sheer horror and tumult that people must have experienced by living through something like the Wars of the Roses.

Labels: Books, Game of Thrones, The House of York, War