The fifteenth anniversary of a very special book 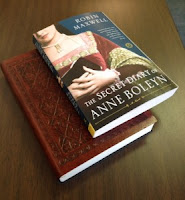 Last month saw the fifteenth anniversary and the twenty-fourth printing of Robin Maxwell's magnificent debut novel, The Secret Diary of Anne Boleyn. Out with a brand spanking new cover, with, I believe, a coloured-up version of Merle Oberon from 1933's The Private Life of Henry VIII, Secret Diary was the first novel I ever read about Anne Boleyn. It, and Anne of the Thousand Days, helped give me the interest in sixteenth century history that led on to much wider reading as a child and teenager, and from there to my admissions essay to Oxford (on Anne Boleyn's date of birth), my interview for a place there and the modules I took during  my first semester.

The novel takes the form, unsurprisingly, of a diary that the character of Anne keeps intermittently over the span of her fifteen-year career at the English court. However, the novel also has a dual storyline about Anne's daughter, Elizabeth, who is now all grown up and queen-regnant of England and Ireland. Shortly after coming to the throne, Elizabeth is visited by an elderly gentlewoman who was once a lady-in-waiting to Queen Anne Boleyn and kept the queen's diary after she was killed. With the political environment now slightly safer, Lady Matilda thinks it's the right time to hand the diary over to Anne's next of kin - Queen Elizabeth. Elizabeth, who has very little memory of her mother, therefore reads about Anne's extraordinary journey as she is trying to navigate her own.

The great international success of The Secret Diary of Anne Boleyn is a tribute to the skills of its author, Robin Maxwell, who wrote this lovely guest article about it on The Anne Boleyn Files, hosted by Claire Ridgway.

I recommend both the article and the novel.
Posted by Gareth Russell at 16:18