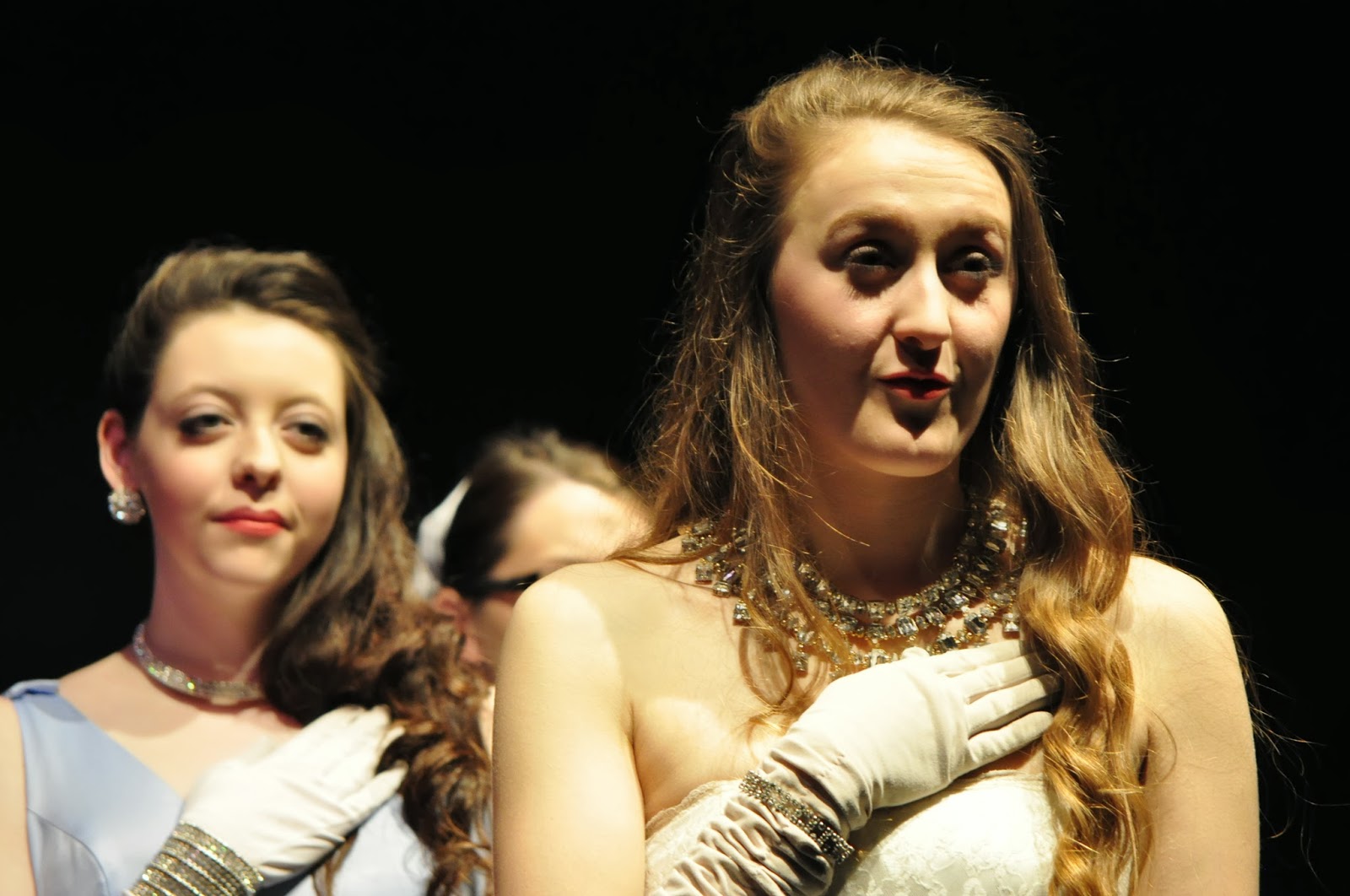 Revered as one of the most iconic beauties of the eighteenth century and reviled as a symbol of pre-revolutionary society's elitism, Gabrielle de Polignac, a duchess who befriended Marie-Antoinette, has had a chequered history. In The Gate of the Year, the story of Gabrielle and the revolution was updated to the modern day and the Northern Irish actress who played her, Rebecca Lenaghan (above, right), is the first among the cast to answer a few questions about the show.

1. Rebecca, on-stage the character of Jack Necker describes Gabrielle de Polignac as a “self-absorbed socialite”. That seems to be a pervasive view of her. Do you think it’s fair?

Jack Necker’s comment is a superficial, heated jibe at Gabrielle and it is most unfair to the complexities of her character. Necker provides the phrase in an attempt to guide an equally juvenile response; however, the Duchess’s composed reaction is indicative of her sure knowledge (as well as my own) that the remark is ridiculous. She does not need to respond because she knows, like Necker, that his words are neither fair nor true. The play is littered with examples of Gabrielle’s genuine affection for the people who matter most, both her friends and her family, despite the somewhat aloof exterior she presents to characters like the Prime Minister.


2. She’s played by on-screen by actresses like Rose Byrne and Virginie Ledoyen, how did you approach playing her yourself and making your own?

Both actresses played their characters differently in Marie Antoinette and Farewell, My Queen and I wanted to change her again. My main focus in making my Gabrielle different from theirs was to approach her from a more sympathetic angle, especially knowing the audience might be sceptical of high aristocratic society. I wanted the audience to understand the human horror faced by the residents of Versailles and to do this, I tried to make her enjoyable; someone who members of the audience would want to befriend. Through trying to make her likeable and passionate, I wanted the audience to feel the poignancy in the play’s concluding scenes, that a character they had so thoroughly enjoyed watching could face such a harrowing end.

3. Are there any similarities between you and Gabrielle?

At the beginning of the rehearsal process, I didn’t think so but as I got to know her more, various similarities appeared. We are certainly both prepared to fight for what we want, regardless of the thoughts of others as well as the importance of family and friends in our lives. I would like to think I could relate to her self-determination and inability to lie to herself. Gabrielle’s strength and surety of her character encourages my own and I hope this continues. And, of course, we both love Marie-Antoinette.

4. Many of your scenes on-stage take place with David Paulin, who plays the King’s younger brother, Charles. Did you enjoy creating their relationship?

Unexpectedly, I really did enjoy developing this relationship. I had thought that Gabrielle’s rapport with the Queen would be my favourite but, in the end, I think her friendship with Charles won. Our first rehearsal of a Charles and Gabrielle scene definitely helped in shaping their relationship throughout the play. We did some very enjoyable improvisations, with the addition of Gabrielle’s brother Oscar, which created a bit of background to their friendship and meant that we could share more understanding on-stage with each other than we could with other characters.


5. You spoke in rehearsal of how much you had enjoyed playing her: was there any moment that always stood out as a personal favourite?

I loved playing Gabrielle. I think my favourite moment in the play was her line to Necker “most people who didn’t go to boarding school pronounce it that way” in response to his pronunciation of “oxymoron”. It captures her wicked humour, her astute intelligence in social situations and her ability to flawlessly deliver such an acerbic line with a sumptuous smile.

6. Would you ever want to play her again?

If I got the opportunity, I would love nothing more than to play her again. Even though the play has ended; she still very much seems to be a part of me and I’m not sure I’m quite ready to let her go yet.
Posted by Gareth Russell at 00:22