"A History of the English Monarchy" extract: Lord of Warriors and Ring-Giver of Men 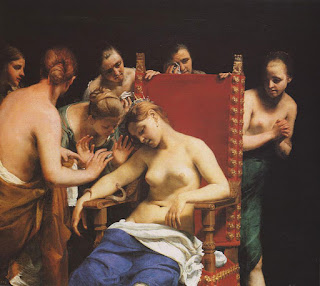 My most recent book A History of the English Monarchy covers the English Crown from Roman rule to the death of Elizabeth I in 1603, when the monarchy began to shift into a British institution. To mark almost a year since it was released, I'm posting short extracts from each of the book's seven chapters, over the  next few days.

The book begins with Conquest: The violent birth of the monarchy, a chapter which covers the longest time-span of all seven by narrating the development of monarchy in England from 30 B. C., beginning with the suicide of the goddess-queen Cleopatra and the seeming victory of Britain's republican rulers in Rome, through to the reign of England's most famous royal saint, King Edward the Confessor. This short extract discusses the importance of the family of Alfred the Great, the Wessex line of kings who helped unite England in the ninth and tenth centuries.


After Alfred, who died in October 899 , there was a succession of four kings of his line who expanded the borders of Wessex and the authority of its Crown. Alfred’s son, King Edward the Elder, was acknowledged as overlord of sizeable portions of the country by 920. Like his father, he styled himself King of the Anglo-Saxons, rather than solely of Wessex, a telling indicator of their family’s growing power. It was his son, and Alfred’s grandson, Æthelstan, who could justifiably claim to be the first King of England by conquering the last of the Viking kingdoms at York. He also forced the Welsh and Scottish royals to acknowledge him, reluctantly, as their overlord and the chroniclers gave him the rather magnificent Tolkein-sounding epithet of ‘lord of warriors and ring-giver of men’. His successor and younger brother, King Edmund the Just, was called ‘lord of the English, guardian of kinsmen, loved doer of deeds’. It was a strong line of Christian warrior-kings who, from Alfred the Great to Edmund the Just, took a small kingdom on the brink of annihilation to be conqueror and liberator of an entire nation. It was this family, and their followers, who gave birth to the kingdom of England.


In 946, King Edmund was murdered by a crazed ex-thief, shortly after attending Mass for Saint Augustine’s Day. Edmund was succeeded by his brother Eadred, who died in 955 and bequeathed the crown to Edmund’s handsome teenage son Eadwig, nicknamed Eadwig the Fair due to his good looks. Young and lusty Eadwig had other things on his mind than the piety and conquest of his forebears. He was determined to enjoy his kingship, not endure it. Things got off to a decidedly rocky start when the young monarch skipped-out on his own coronation banquet, an event at which his absence was rather likely to be noted. Wondering where the star of the show had gone, his courtiers made the horrible (in hindsight) decision of sending the saintly Dunstan to find him. Dunstan, abbot of the great monastery at Glastonbury, found the King romping in bed with a young woman – according to some sources, with two. To say that the leading champion of monastic reform in England did not see the funny side of the King’s actions would be something of an understatement. Later stories suggested that one of the women had been the young King’s future mother-in-law and that an enraged Dunstan had dared drag the King, possibly mid-coitus, out of bed and back to the banquet. Eadwig’s intermission performance at his coronation set the tone for the rest of the reign, marked as it was by deteriorating relations between throne and Church.

Eadwig died before his twentieth birthday and he was succeeded by his younger brother Edgar, who was made of more conventionally holy stuff. Dunstan was back in royal favour as Edgar’s new Archbishop of Canterbury. Together, the two men organised a magnificent pageant of royal power at Bath in 973. It was an innovative coronation ceremony, which helped set the tone for nearly all that followed. As Edgar was enthroned as ‘Eadgar Rex Anglo’ (‘Edgar, King of the English’), the choir sang the story of Zadok the Priest and Nathan the Prophet anointing King Solomon in the Old Testament. Today, those words still ring out at British coronations, albeit to the splendid music of Handel. Edgar was invested with the crown, the ring, the rod, the sceptre and the sword as symbols of his political, spiritual, judicial and military duties. These too are still part of the insignia of a British monarch.

A History of the English Monarchy: From Boadicea to Elizabeth I is available on British and American Amazon.
Posted by Gareth Russell at 18:07