Marianne Bereft: A Reflection on the early public reaction to the Paris terrorist attacks 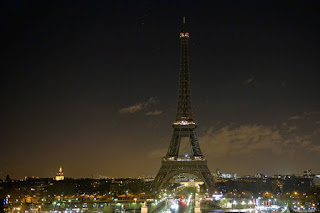 A historian is always caught somewhere between pedantry and pragmatism. In reaction to last night's massacres in Paris, thousands of people have taken advantage of a Facebook app that allows them to alter their profile picture to be superimposed by the colours of the French flag. The gesture, which allows users to show their solidarity with victims of terrorism, utilises the tricolore, a flag that was first adopted two hundred years ago by a government that launched a policy of deliberate and sustained Terror against its own people. The French Revolution's Committee of Public Safety made the Spanish Inquisition look the habeas corpus fan club, massacres and choreographed executions were celebrated as part of the theatre of civic duty, opponents were drowned or butchered en masse, population cleansing was inflicted on sections of the west of France and the new republic, along with having a view of women that would make John Knox look like Gloria Steinem, presided over the annihilation of French religious freedom.

We don't like to talk about the French Revolution's horrors today, because the event has entered into the core mythology of the West. It was, so we are told, one of the birthplaces of Western liberal democracy, an interpretation that might have raised more than a guffaw from its participants. For all of its glib catchphrases, and very tangible and important successes (particularly outside France), the French Revolution was also a violent, cruel and often repulsive entity that was driven forward by rampantly intolerant political extremism. But it is seldom described as such.

Something of that collective will to ignore or deny was evident in the initial online reaction to the unspeakable jihadist horrors that took place this weekend. I have so far counted about a dozen #prayforParis on the statuses of Facebook acquaintances I know to be atheists or committed agnostics. I've seen people who quite seriously compared the democratically-elected Margaret Thatcher to a Nazi dictator wax lyrical about the inviolable sanctity of Western freedom. And the apotheosis of stupidity seems to me to be the #TerrorismhasnoReligion. Yes, it does. In this case, radical Islam. With the Ku Klux Klan, it is an extreme interpretation of Protestantism. You may not like how these people have chosen to interpret either the Qu'ran or the Bible, but to suggest that "real" religion is antithetical to violence is to fall into the trap of believing the West's tendency to view religion as the great cosmic hug, a theological mood bracelet, that exists solely to validate the believers and to make them behave like nice people. There are hundreds of examples in many religious texts which advocate pain, self-denial, violence or acts of punishing emotional repression. Last night's terror did have a religion. Faith was its driving motivation; it was not a fig leaf to cover some other goal. To insist that the jihadists are guilty of a horrible misunderstanding of their holy texts is to miss both the point and the opportunity to engage with the issue. Their interpretation is unquestionably horrible, and as far as one can be on what is essentially a matter of opinion it is almost certainly wrong, but to focus on that as our first port of call means that we run the risk of underestimating how deeply their perverse take on their religion matters to the killers. A thousand errors are being made through well-intentioned solipsism. Just as we have decided that "Liberty, Equality, Fraternity" are concepts too pure and too good for them to ever intentionally or inevitably produce negative side effects, we have exonerated certain strands of religious thought.

At this point, it might be fashionable to push the contrarian argument even further by citing the many examples we see online, every day, that prove we are living in an age of hysterical, mawkish voyeurism. This year, for God alone knows what reason, it suddenly became the fashion for people to post selfies online with a Poppy over their mouths to symbolise the annual minutes' silence held throughout Britain and the Commonwealth to commemorate the war dead. Apparently, quietly excusing oneself had gone out the window in exchange for yet another "look at me, behold and applaud my virtue" snapshot. One could use the reaction of one half of the Internet to despair at the bigoted fear-mongers of the world, who fall back on sweeping generalisations by implying that the majority of the world's second-largest faith are jihad-supporting terrorists. Equally, you could point at the proliferation of half-baked hyper-liberal keyboard warriors, thundering over the newsfeed barricades with their certain-to-be-well-received platitudes about pluralism, diversity and the heartwarming loveliness of the human race. Many in the latter camp will run further with the baton of daring intellectualism by suggesting the West is to blame for the butchering. A cascade of caveats will arrive alongside the sting of self-accusation.

But I've always wondered at the tendency of those who praise vox populi in principle only to dismiss it in practice. It doesn't particularly matter that the French national flag began its life in less than delightful circumstances. That flag has been around for so long and weathered so many other events, including heroic opposition to Nazi invasion, that it has rightly come to symbolise something else entirely. Through its proliferation on Facebook, even from those who are doing it with half an eye to how many likes they will receive, the tricolore has come to represent this week's empathy and resilience. Historians, and certainly anthropologists, will look back on our reaction to this tragedy with fascination. In their conclusions, they will have the great advantage of knowing how the story ends. For the moment, all we can do is try to react as honestly as we can. Since History often reads as a catalogue of man's failures, it would be very easy for us to focus solely on the maudlin, the crass, the flawed or the illogical. Instead, it might be more worthwhile to appreciate the caring, the eloquent, heartfelt empathy of those who felt sufficiently moved by this tragedy to display their feelings of outrage and support.

There is a threat that needs to be understood. It is the author of horror, misery and pain. It has butchered thousands of Muslims and Christians in the Middle East. It has been responsible for ethnic purges, gang rape and cultural destruction. Now, it is spreading outwards to strike at the great cities of foreign nations, where it will not hesitate to kill people of all religions and none. It is an ideology that writes in blood and claims, with total sincerity, to have a Divine mandate. It uses acts of war and moral squalor as its first course of action, not its last. Just over two hundred years ago, as they watched the tricolore being hoisted for the first time on the horizon, the denizens of old regime Versailles posed the question, "Who can say where this audacity of ideas will end?" As Paris gives the world yet another display of stoic courage and dignity, that question must be resurrected. Something must be done. I don't know what it is. But there is something heartening in most of the reactions to this weekend's brutality and they potentially provide a glimmer of hope on the very difficult road ahead.
Posted by Gareth Russell at 20:15