"A History of the English Monarchy" extract: The Empress and the Sleeping Saints 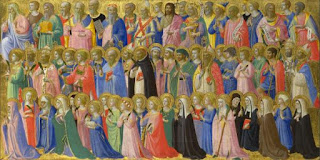 My most recent book A History of the English Monarchy covers the English Crown from Roman rule to the death of Elizabeth I in 1603, when the monarchy began to shift into a British institution. Over the next few weeks, I'm posting short extracts from each of the book's seven chapters.

The book's second chapter, God, Life and Victory, covers the years from 1066 to 1154 by focusing on the four kings who ruled after the Norman Conquest. This extract describes the impact of the monarchy's implosion during a civil war subsequently known as "the Anarchy", when the former King's only surviving daughter, the German Emperor's widow, was displaced in the line of succession by her cousin, who claimed the throne as King Stephen.


… in 1141 Stephen suffered an eviscerating defeat at the Battle of Lincoln. The skirmish took place at Candlemas, the feast that marked the anniversary of the infant Jesus being formally presented by His mother and stepfather at the Temple in Jerusalem. The day also marked when the Virgin Mary had been ritually purified by the rites of the Jewish faith, removing the stain of childbirth from her. Thus known variably as Candlemas, the Presentation of Jesus or the Feast of the Purification of the Virgin, the day was celebrated by a festival of light within Christian churches and it was during Mass that King Stephen’s Candlemas candle broke in his hands. If it was an omen, as many at the time assumed, it was an accurate one. In the ensuing carnage, Stephen fought bravely in hand-to-hand combat, but was eventually knocked unconscious by one of the Empress’s knights.

With Stephen in her clutches, the Empress moved to London, where she was granted the interim title of domina Anglorum – ‘lady of the English’. Rather than win hearts, however, the Empress preferred to step on toes. Her haughtiness, her petty vindictiveness, her demands for tribute, her heavy fines and her overbearing arrogance alienated the capital until the Londoners rose up against her, forcing her to flee before she could be crowned. The riots happened so abruptly that the Empress fled mid-dinner, plates still on the table. Stephen’s wife Matilda was encamped on the south bank of the Thames with mercenaries from her native Boulogne, perfectly situated to take advantage of the Empress’s incompetence. The latter’s biographer, Marjorie Chibnall, is certainly correct in stating that the Empress was excoriated for displaying the same kind of dictatorial behaviour that had been tolerated in her father and it is curious that a woman who had won such praise for her behaviour in Italy and Germany during her first marriage could have behaved with such belligerent idiocy in England, but people change, and rage at her disinheritance by Stephen, and the ease with which he had done it, may have permanently shocked and embittered her. Either way, the loss of London in 1141 was the closest the Empress ever came to winning the crown.

After that, the war between the cousins settled into a long and vicious campaign of attrition.The chronicles of the time record the agony endured by the population. Normandy, invaded by the armies of the Empress’s husband Geoffrey, ‘suffered continually from terrible disasters and daily feared still worse […] the whole province was without an effective ruler’. The Gesta Stephani, a chronicle sympathetic to King Stephen, wrote of ‘villages […] standing solitary and almost empty because the peasants of both sexes and all ages were dead’. Henry of Huntingdon remembered an England full of ‘slaughter, fire and rapine, cries of anguish and horror on every side’. The rich men filled their castles ‘with devils and evil men’, and with royal justice in the doldrums, the common folk bore the brunt of the aristocracy’s lawless depravity. ‘They put them in prison,’ the Anglo-Saxon Chronicle wrote, ‘and tortured them with indescribable torture to extort silver and gold […] They were hung by the thumbs or by the head, and chains were hung on their feet. Knotted ropes were put round their heads and twisted till they penetrated to the brains. They put them in prisons where there were adders and snakes and toads, and killed them like that. Some they put in an instrument of torture, that is in a chest which was short and narrow and not deep, and they put sharp stones in it and pressed the man so that he had all his limbs broken.’ The vicious, bloody and selfish upper class installed by the first Norman King helped lose it for the last. Many of those nobles had pressured Stephen into taking the throne in the first place, but abandoned him when war came. Little wonder that Stephen cried, ‘When they have chosen me king, why do they abandon me?’

It was a time of anarchy, misery and unanswered prayers: ‘To till the ground was to plough the sea; the earth bare no corn, for the lands were all laid waste by such deeds; and [men] said openly that Christ slept and his saints.’