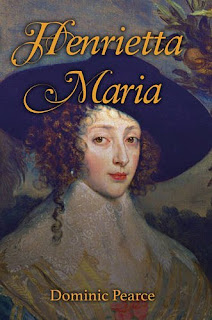 I am delighted and excited that Dominic Pearce's biography of Henrietta Maria of France, wife of King Charles I, is available now from Amberley. Henrietta Maria's marriage coincided with the clash between parliamentarianism and absolutism in Britain, with the Queen's extravagance, Catholic faith and French upbringing cited by her husband's opponents as some of the causes for the civil war that cost thousands of lives and eventually toppled the monarchy in 1649.

Dominic has kindly shared what attracted him to the story of the charismatic and controversial Bourbon princess, who was the younger sister of King Louis XIII of France, Queen Elisabeth of Spain and the mother of kings Charles II and James II.

When I started to research Henrietta Maria’s life I knew the story would be good. The queen was the muse of Anthony van Dyck, she survived two civil wars (the second one in France), outlived her husband and five of her children, and gave five monarchs to England – two children and three grand-children. To my delight I found an exceptional story that went a good deal further even than this. First there is the French background. Henrietta Maria was born in 1609. Her father was King Henri IV, a French national hero who saved his country from destruction at the end of the sixteenth century. Her mother was his second wife Marie de Médicis - famous as the builder of the Palais de Luxembourg, and for the cycle of paintings about her life by Rubens.

Henrietta Maria lived in France not only as a child but also from 1644 to 1660, and she died in France. The French history alone is mesmeric. It gives new insights into the queen’s life and the choices she made. It shines a new light on the English history of the period, so often viewed in isolation.

Second the queen’s character. Many of her letters survive. They are eloquent. She was strong, straightforward, intelligent, and filled with energy. She had a highly developed sense of fun. She was devoted to Charles I, utterly loyal. She was immensely courageous. I cannot say she was always the easiest person, but she is impressive, and she certainly had, when she chose, an irresistible charm.

Third the English Civil War. I discovered that, without Henrietta Maria, the conflict would not have started in the way it did. There was a real political problem in England (and Scotland) regardless of the queen. However she was at the heart of what happened – and not just as a victim. This is not the place to explain what she did during the war, but I can say she was nearly killed three times. There is more - her cultural patronage, the ups and downs of her marriage and family life, her sheer professionalism as a queen consort.

We can be close to Henrietta Maria. I have already said we have her letters. In the French court memoirs of the period we know how she appeared to her highly sophisticated compatriots. She is described in English letters, and appears in the diaries of Pepys and Evelyn. We have an eye witness account of her reaction, when she heard of the death of Charles I. We know what the furniture and ornaments were in the Château de Colombes, when she died (they were quite something). I was very lucky to have the opportunity to research this extraordinary woman who lived in such a period of history. She really is worth knowing more about.
Posted by Gareth Russell at 23:39