The Death of Queen Elizabeth 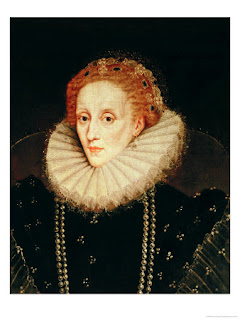 "No oblivion shall ever bury the glory of her name; for her happy and renowned memory shall liveth and shall for ever live in the minds of men."
- William Camden, Elizabethan scholar (1551 - 1623)

On March 24th 1603, after a reign of almost forty-five years, Elizabeth I, Queen of England and Queen of Ireland, died at Richmond Palace at the age of sixty-nine, unmarried, childless, very probably a virgin and certainly one of the most successful rulers in English history. Personally, Elizabeth I is probably one of my favourite historical characters and I find the account of her death from Sir John Nottingham's diary very moving. It isn't quoted very often, so I thought it was worth digging up.

The Queen's decline had begun at the end of February, when she began complaining of insomnia, a dry throat and a heat in her chest. Robert Cecil, her chief minister, attempted to get the Queen to go to bed on March 9th, saying she must do so at once. Elizabeth replied with the (I think) magnificent statement: "Little man, the word 'must' is not used to Princes." Nine days later, the Queen was so ill that she had to be propped-up on cushions on the floor of her audience chamber and finally, on March 21st, she took to her bed of her own free will, to die there, and the Archbishop of Canterbury was summoned.

A few days later, a courtier, Sir John Nottingham (who I mentioned above), would write a very moving account in his diary of Elizabeth's final hours, which he had witnessed personally: -

"She hath been in manner speechless for two days, very pensive and silent; since Shrovetide, sitting sometimes with her eyes fixed upon one object many hours together, yet she always had her perfect sense and memory, and yesterday signified by the lifting of her hand and eyes to Heaven, a sign which Dr. Parry entreated of her, that she believed that Faith which she had caused to be professed, and looked faithfully to be saved by Christ's merits and mercy only, and by no other means. She took great delight in hearing prayers, would often at the name of Jesus lift up her hands and eyes to heaven. She would not hear the Archbishop speak of hope of her longer life, but when he prayed or spoke of Heaven, and those joys, she would hug his hand... It seems she might have lived if she would have used means; but she would not be persuaded, and princes must not be forced."

The Queen slipped quietly away during the night and was succeeded by her third cousin, James VI, King of Scots. James's succession to the throne as King James I of England and Ireland helped lay the foundation of Great Britain, with England, Ireland and Scotland all now ruled by one monarch for the first time in their history.
Posted by Gareth Russell at 01:38