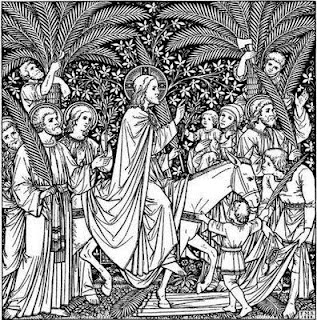 “And a very great multitude spread their garments in the way; others cut down branches from the trees, and strew them in the way.”
- The Gospel according to Saint Matthew, Chapter 21

In the Christian tradition, Palm Sunday marks the beginning of Holy Week, which culminates with the end of Lent on the following Sunday. Holy Week is traditionally used to mark the arrest, trial, imprisonment, Passion and Resurrection of Jesus Christ and it commences with Palm Sunday - Christ's Triumphal Entry into Jerusalem, when he was greeted by crowds waving palm trees in his honour.

According to the Gospels and the Old Testament prophets, the Messiah would enter Jerusalem riding upon a donkey and with typical literalism, this humble act was imitated by the leaders of the Church during the Middle Ages. For example, it was felt inappropriate that a Cardinal, despite being a Prince of the Church, would be seen riding upon a horse, when Christ Himself had entered Jerusalem on a donkey. Eagle-eyed fans of costume dramas might have noticed the figure of, say, Cardinal Wolsey riding on a donkey in scenes of Anne of the Thousand Days or The Tudors, and this custom is why he does so.

Like many of the great Christian festivals, the earliest surviving documentary evidence we have of them actually being celebrated dates from the 4th century A.D., following the legalisation of Christianity by Emperor Constantine the Great. However, as Dr S.J. Shoemaker reminds us in his paper The Cult of the Virgin in the Fourth Century: A Fresh Look at Some Old and New Sources, this does not mean that there were no Christian festivals prior to the 4th century. In fact, their existence in the 4th century proves that the festivals had existed, in some form or another, for many years during the Roman Empire's persecution of Christianity, although, of course, most of the sources are now lost to us.

In the Russian Orthodox tradition, Palm Sunday is one of the Twelve Great Feasts of the Church calendar, although due to the fact that palm branches were generally unavailable in the Russian Empire, the Orthodox faithful often decorate their churches with pussy-willows, one of the earliest flowers to blossom during the Russian Spring. In the early days of Tsarism, Palm Sunday was celebrated by a grand procession through Moscow, during which the Patriarch of Moscow would ride through the city on a donkey draped in white, with the Tsar humbly leading the procession on foot. The parade, which started at the palace-fortress of the Kremlin and ended at Saint Basil's Cathedral, was supposed to show the supremacy of spiritual authority over earthly power and it had begun during the reign of Ivan the Terrible. However, Peter the Great, disliking the idea of the Church competing for influence with the monarchy, banned the parade in 1693, much to the distress of his mother, the Dowager Tsarina Natalia, who was one of the symbolic leaders of ultra-conservatism within Russian politics at that time. Recently, over the last decade, the custom of the parade from the Kremlin to Saint Basil's has been resurrected, but, to date, Peter the Great has remained the last Tsar to lead the procession.
Posted by Gareth Russell at 18:14