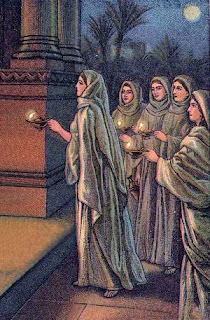 “My soul is exceedingly sorrowful unto death.”
- The Gospel according to Saint Mark, Chapter 14

Holy Tuesday, the third day of Holy Week, (sometimes known as "Great and Holy Tuesday" in the Eastern Churches), has a set of Biblical readings, like all the other days of Holy Week. Very few Protestant churches make a point of observing it, although those that do tend to follow the Catholic Church in reading the first six verses of Isaiah, Chapter 49, Psalm 71, I Corinthians 1 (verses 18 -31) and the thirteenth chapter of Saint John's Gospel. However, within the Orthodox Churches, the Tuesday of Holy Week is given over to the Parable of the Ten Virgins (above) as told in Saint Matthew's Gospel.

The Parable of the Ten Virgins is the source of the famous saying, "You do not know the day or the hour," a phrase now associated with death, particularly a sudden one. Over the last few weeks, I have been very aware of grief - my own family has been bereaved by the sudden death of my Uncle Richard and various friends have lost loved ones at the same time, but Easter is a time that celebrates both life and death; grief and hope. Hours before her execution, Anne Boleyn scribbled a note into her prayer book, advising a friend that hope was the force people used to get from one day to the next. I like that and I agree with her.

By lucky coincidence, Easter falls near the beginning of Spring time in the West. As a festival, it is centred around the theme of regeneration, re-birth and, in many ways, it's the antithesis of the "stiff upper lip" mentality. Easter teaches that it's OK to grieve, to weep and to feel distress, but also that hope springs eternal. And, to paraphrase Martha Stewart: that's a good thing.
Posted by Gareth Russell at 00:27