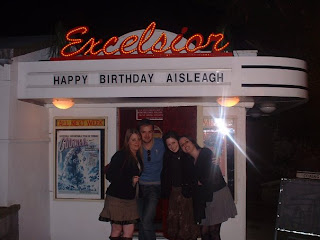 "Are you frightfully cross?"
"No. Just a little hungry."

Aisleagh M. and I did not have the greatest starts to a friendship. We first met each other within a few weeks of starting at Down High, when I was a podgy scarf-wearing 1st year with a "posh" accent and Aisleagh sported enormous glasses and a cow's lick. Things took a turn for the worse when, one day outside Music class, her best friend Grace's contact lense flipped inwards, Grace crumpled to the ground in pain and her eye turned beetroot red. "Good," I said, as I swept past her agony-wracked body. Aisleagh heard and wasn't pleased. (I can't remember why Grace and I had turned on each other - I think it was something to with Home Ec.) Finally, on a History trip to France, Aisleagh poisoned me by tipping a mountain of salt into my glass at supper one evening. I didn't notice, drank it and accidentally smashed the stem of the glass in my fury when I set it down.

The turning point came in 4th year, when we were both in Miss Gorman's GCSE English Lit class. For some reason, we ended-up sitting beside each other for the first half of the year and fell into conversation about how much we hated some other people in our year. And from that spite, a beautiful friendship was born.

Together, it must be said, that Aisleagh and I didn't always bring out the best in one other. One sweltering summer day, along with our friends Grace and Thomas, we went to Saul for a picnic, near Saint Patrick's Mount. OK - on it. However, since it was so close to Marching Season not a lot of places were open because of the holiday, so supplies were limited. OK - again, that's a lie: we'd eaten everything by the time we got there.

After a few hours, the heat grew unbearable, as did our thirst, so we bullied Grace and Thomas into going and buying some water, handing them my drinks cooling bag to help. An hour later, they returned, with sweat pouring off Thomas and Grace practically crawling along behind him: "Here," they said wearily, proffering the cool bag.

I opened it, to see that they had purchased carbonated water - the only kind available at the only shop available, the Raholp Post Office. I showed the contents to Aisleagh, who was sunbathing next to me, near to the Shrine of Our Lady of Lourdes. From behind her sunglasses, Aisleagh peered into the bag before almost imperceptibly shaking her head.

"Ehm.... we would like still water," I said, handing the bag back.
"What?" said Thomas.
"Yes, we are going to require still, chilled, water, please."
Thomas, collapsing to the ground with heat exhaustion, just kept staring at me in horror: "Are you serious?"
"Yes, I am serious. I am also thirsty."
Grace, meanwhile, was just staring at Aisleagh, with a piteous expression in her eyes - begging not to be sent back on the trail. I had never seen Grace so broken and tired before. Regarding her best friend's misery and physical near-collapse, Aisleagh made her decision and propped herself up on her elbows: "I'm allergic to fizzy water."
Grace's mouth fell open and Thomas's was pursed into a seriously unimpressed line: "What?" asked Grace.
"Yep. I need still."
"But..."
"Allergic!"

However, Aisleagh and I failed to consider the logistics of tactics that day - because her evening was being spent with Grace, mine with Thomas. So as I was walking home with Thomas, it's fair to say that my behaviour earlier in the day did not exactly receive glowing reviews and it's equally fair to say that Aisleagh was the victim of a savage physical attack once Grace recovered her energy levels.

Anyway, today is Aisleagh's b'diddy and huge licky love to her on this most glorious of days. Through bullying, poisoning, hair pulling, biting, shopping excursions to Dublin, diets, spiders, Bones, the Lone Ranger, The X Factor marathon, painting with all the colours of the wind, paws up for Lady Gaga, drama practicals in school, the time the curtain rose on us for the school play and we were hugging each other in front of the entire audience and that terrible time were we went to a house party that was so unutterably boring that we tried to escape by climbing out the bathroom window, only to be caught by the host (your boyfriend at the time) - it's all been a delightful cycle of dysfunction.