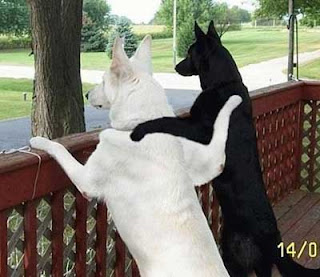 Recently I got to thinking (yay!) about hugging and it was actually the events of last week which made me really think about. Hugging, in general, is considered by many British people to be just a bit too "American" - whatever that means. The culture of hugging one another to say hello or goodbye is definitely not a traditional British way of doing things. It isn't always easy to ask "how do you do?" when your arms are clasped behind somebody else's back and I have a sort of schizoid love/hate relationship with the hug - I feel like it's something I should do more, I like the people I do hug, but I also have relationships in my life in which hugging would just seem bizarre, if not downright frightening.

As some of you may know, on Tuesday March 16th my uncle, Richard, passed away very unexpectedly. During Uncle Richard's Wake, the entire extended family got together most afternoons and every evening to meet visitors who had come to pay their condolences, keep an open house and keep the endless supply of never-ending tea, sandwiches and cakes without which, apparently, the entire Northern Irish Protestant culture of mourning would collapse in on itself.

Two days after Uncle Richard passed away, my cousins Jonathan and Andrew called down to see our grandparents. (They, like me, were Richard's nephews.) As Jonathan was saying goodbye to our grandfather, he hugged him and it suddenly occurred to me that Grandpa Richard and I had grown out of the habit of hugging one another once I'd turned about 15 and concluded that it wasn't "manly" or something equally foolish. Grandpa and I are very close, so there's really no good reason apart from habit for not giving him a goodbye hug. I would never leave their house without hugging Nana and giving her a kiss, but for the last eight years I can't remember really hugging my grandfather. With the sadness of Uncle Richard's death I decided to make the effort again to make sure I hugged Grandpa every time I left the house and that really has been a good thing. Undoubtedly, a lot of other family members were spurred on to be more affectionate with one another in the wake of Uncle Richard's passing - my Uncle Ivan, my cousin's husband Martin, my cousins Elaine and June and my sister Jenny were all making a real effort to make sure they hugged everyone before they left the house each night. Exceptional circumstances, no doubt, but lovely all the same.

As I was writing this I also began to think about hugging in general and it struck me that I actually hug astonishingly few of my friends. Am I dead on the inside? There are obviously some very good friends that I do hug on a regular basis, but I have never hugged the vast majority of my close personal friends. There are friends like Emerald, Alexa and Scarlett, all of whom I would usually greet with a kiss, but the only time I've ever hugged a really good friend like, say, Aisleagh, was probably when we both mutually mistook each other for another bottle of gin! And if I went to hug either Beth, Laura or Ellen, they would undoubtedly assume I was trying to choke them in some particularly new and avant-garde manner, with the end result being that Beth would make her panicked pterodactyl sound, Ellen would suffer an enormous panic attack and quite possibly a stroke and Laura would scratch a bloody vengeance into my face.

The greatest example of the anti-hugging phenomenon is undoubtedly my friend Kerry. Kerry is one of my best friends, we've been friends since the age of eleven, we have cried together, laughed together, binged together, we can finish each other's sentences and we pushed each other into self-destructive cycles of delightfulness for the last twelve years and yet not once have we ever hugged each other. When our friend Sarah attempted to mock our "frigid" ways and introduced hugging into the group, the only real result was a wave of paranoia, with me checking my back every five minutes to see if they'd stuck a note onto the back of it or a gleam of suspicious fear glinting permanently in Kerry's eyes.

But, so what? Kerry and I are not any the less close friends - dysfunctionally close, actually - because we don't hug. Neither are Sarah and I. Does it all boil down to the quite sad fact that we don't trust each other enough to hug without an attempt at sabotage? Of course it does! And that's a glorious thing. Have I been lacking in familial closeness with my grandfather for the last eight years? No, I don't think so. I love him, he loves me and that's really all that matters. The friends I do hug - great; the friends I don't - delightful.

Hugging, in the end, is a bit like drinking. There's nothing more delightful when it's the right time and nothing more sickening when you're just not in the mood, time or place for it.
Posted by Gareth Russell at 12:59