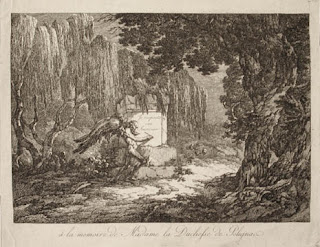 'Who is this? And what is here?
And in the lighted palace near
Died the sound of royal cheer;
And they crossed themselves for fear,
All the Knights at Camelot;
But Lancelot mused a little space
He said, "She has a lovely face;
God in His mercy lend her grace,
The Lady of Shalott."'
- Alfred, Lord Tennyson
﻿
Illustration above: An anonymous royalist pamphlet from 1793, showing the Angel of Death inscribing a monument to the Duchesse de Polignac

On December 9th, 1793, one of the last and the most exquisite of the ancien régime's socialites, Gabrielle, Duchesse de Polignac, died in exile in Vienna, less than two months after the execution of her friend and patroness, Queen Marie-Antoinette. She had been ailing for some time, although what precisely caused her death is still something of a mystery. In his 1974 biography Louis and Antoinette, Vincent Cronin wrote "Gabrielle de Polignac contracted a sudden illness in December 1793 and was dead within twelve hours". It may be that the duchess's death was hastened by a sudden infection caught in the depths of the Austrian winter, but it seems clear to me from my own research that for quite a few years prior to her death, Madame de Polignac had not been in good health. Her young and pretty daughter wrote in a letter to one of her mother's many English friends that since the news of the Queen's execution in October it had been possible to see Death written all over Gabrielle's face. The former court painter, Madame Le Brun, living nearby, wrote that in the final months of her life Gabrielle's "still lovely" face had been drained of its colour by the combined effects of sorrow and illness. Lady Antonia Fraser, author of Marie Antoinette: The Journey surmises that the cause of La Belle Gabrielle's death may therefore have been terminal cancer, exacerbated by suffering. At the time, others suggested it may have been consumption (tuberculosis.)
Having written Gabrielle in as one of the major characters in my play The Audacity of Ideas, set at Versailles on the eve of the Revolution of 1789, I have grappled with what killed her. I would like to quote from my author's note for that play and also show the scene in which Gabrielle is informed by the court physician, Dr. Lassonne, about her condition - four years prior to her death. No disclaimer is needed for the educated, but it is always worth bearing in mind that the scene between the duchess and the doctor is, of course, fictional.
At the time of her death, Gabrielle was survived by her husband, Jules, her daughter and her three sons - Jules (the future Prime Minister of France), Armand and Camille. Today, Gabrielle's descendants sit on the throne of Monaco.

Extract from the Author's Note of The Audacity of Ideas by Gareth Russell©
Of course, as in any work of historically based drama or fiction, there must be inaccuracies... the disease which ended Gabrielle de Polignac’s life in December of 1793 may not have been consumption. In fact, it probably wasn’t, but for the purposes of the play it suited the narrative better and, in fairness, there is a faint possibility that is what it was. She kept the details of her suffering so tightly guarded that even her own family don’t seem to have been certain of what it was which actually killed her in the end. On her tombstone, they simply said that she had died as a result of suffering – a ruling that was both diplomatic and elegant. Writing in 1974, Vincent Cronin concluded that she had simply contracted a sudden illness whilst in exile and, within twelve hours, was dead. It is possible that the last few hours saw a very rapid decline which gave this appearance, but it is clear that as far back as 1789 she was not a well woman. Antonia Fraser concludes that it was probably cancer and that the sheer stress of that last five years of her life exacerbated it. Whether it was consumption, cancer, depression or all three, Gabrielle’s desire to maintain her beauty was granted – even in the final, no doubt horrifying, stages of her illness, her daughter Agläié made a point of mentioning her mother’s ‘charming face … [although] one could see death written there.’
I have chosen to present her condition as consumption primarily because the dramatic potential is too great to be missed – the final iconic beauty of the ancien régime destroyed by an internal illness which left her flawless on the exterior. Indeed, I had every reason bar artistic predilection to stick to the theory that what eventually killed her was cancer. Gabrielle’s desire to look good despite her disease and the two scenes in which, by a veritable triumph of self-discipline she regains control of herself, are based not only on what I think the real duchess would have done but also as a sort of homage to my late grandmother, Mary Ann Russell (née McIlwaine.) After a too long battle with cancer, her final Christmas with us was ruined when she collapsed in her bathroom and had to be put to bed for the rest of the holidays. Finally, shortly into the New Year she rose to go into hospital and spent hours dressing herself with her customary exactitude – make-up, hair, long coat, dress, pearls, gloves and handbag. She left her home for what proved to be the last time and went to the hospital in where she passed away on January 17th. By general but not exclusive agreement within the family, my grandmother was not an easy woman and yet I, one of the dissenting voices, can say with absolute certainty that I loved her very much and admired her immensely. The one complaint that she ever uttered in the course of her time with cancer was as a half-joke to God, when she reminded Him that she was not Job. So, much of what I remember of her at that time has been put into Gabrielle’s story.