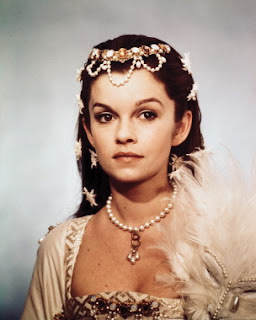 Claire Ridgway over at The Anne Boleyn Files posts a fascinating article on the presents Anne both gave to and received from King Henry VIII. Anne (above played by Quebecois actress Geneviève Bujold in the 1969 Oscar-winner Anne of the Thousand Days) was known to have a taste for the finer things in life. One of her favourite arguments in response to those who said such a love for materialism was incompatible with being a Christian was to quote a work of French theology, L'Ecclesiaste: "Should I say for all this that it is prohibited for to be merry and that Jesu Christ hath only chosen sturdy people: seeing that He Himself hath helped at feasts ... No surely!"
As a young socialite, Anne had already acquired a reputation within the narrow world of the English upper-classes for the fine food and wines she served at her dinner parties, as well as the dances, gambling parties and hunting afternoons she organised. Dr. David Starkey writes that thanks to her childhood in France, she acquired "a gourmet's palette." She apparently did not eat very much, since she was very concerned to remain thin, but what she did eat seems to have been of an exceptionally high standard. Above all else, of course, Anne was famous for her sense of fashion - both as a debutante and in her early career as a lady-in-waiting to Katherine of Aragon, Anne was noted for being "the glass of fashion ... the most observed of all observers". When she became queen, she struck such a glamorous figure that even one of her bitterest enemies called her "the rose of state."
As Claire points out, giving presents at Christmas rather than during the Christmas festivities is a fairly recent phenomenon. England in the time of Henry VIII tended to function more like modern day Spain, in which the bulk of the presents were given in or on January 6th, the day which the Church usually celebrated as the anniversary of the visit of the Magi to the Infant Christ Child and the Holy Family in Bethlehem. When Anne became the King's wife-to-be, she suddenly found that she had a near-unlimited bank balance to finance her expensive tastes and Henry evidently took great pleasure in spoiling her. For example, when she was twenty-three, in the short period between Christmas and Saint Valentine's Day, Anne received a veritable treasure trove of jewels to mark the festive season, including: -
1. "Nineteen diamonds for her head" (Anne had a special fondness for weaving jewels through her long brown hair for balls or special occasions. As a virgin, she was still allowed to wear her hair down and uncovered in public. Only queens were allowed to do the same after they were married.)
2. Two bracelets each crafted from ten diamonds and eight pearls
3. Nineteen diamonds set in "trueloves of crown gold"
4. Twenty-one rubies artfully arranged into gold shaped like a rose

5. "Flower of diamonds" (It sounds very much like jewels crafted into the shape of flowers)
6. Two borders of cloth of gold for the sleeves of a new gown, trimmed with ten diamonds and eight pearls
7.  Six large golden buttons
8. Two diamonds crafted into the shape of two hearts to wear in her hair (given to her on February 5th, which leads me to believe she had commissioned them for a Saint Valentine's Day ball)
9. Twenty-one diamonds
10. Twenty-one rubies
Well, we are living in a material world...
By the time she became queen, in 1533, Anne had to merge a socialite's taste for elegance with what she perceived to be a queen's duty in upholding the magnificence of monarchy. One of her chaplains later recalled her telling them that the monarchy on earth "doth represent and outwardly shadow unto us the glorious and celestial monarchy which God, the governor of all things, doth exercise in the firmament." To this end, between 1533 and her death in 1536, Queen Anne thus spent much on the display which she felt was part of a queen-consort's job criteria. However, she did not entirely lose the old touches of being "the court butterfly".
In the gift-giving season of 1533, the year in which she was crowned, her husband sent her many presents to mark her first official year as Queen of England, most of which seem to have been for the decoration of her new apartments. They are actually a lot more "practical" than the gifts she received a few years earlier, but looking at the gift of spoons in the list below and some of the jewels in the list above, it seems to me that the shape of the rose might have been a particular favourite of Anne's? Interestingly, in the only portrait of her which I think has any serious claim to being genuinely life-like, she is holding a red rose in her hands. (It's generally held that either it or the National Portrait Gallery portrait is a copy of a long-lost original painted from life, perhaps the one which vanished from Lord Lumley's collection in 1736.) But, I digress, the new queen's presents for her inaugural year as a married woman included: -
1. Two gilt serving pots
2. A pair of silver wine flagons, decorated in the French style
3. Twelve gilt bowls (either for puddings or soups, I would say, since they didn't have covers)
4. Three gilt salt shakers
5. Twelve gilt spoons, weighing 18 oz (they sound like serving spoons for the Queen's private suppers)
6. Three more pairs of heavy gilt serving plates, this time with covers
7. Six gilt bowls, with covers
8. Two basins and ewers (presumably for washing the Queen's hands during the meal and those of her guests)
9. Eleven ivory spoons, with roses carved at the ends
10. Four candles "white ... and high"
11. “A round basin of silver for a chamber, and a silver pot to the same, weighing together 138½ oz.” Which sounds to me to be primarily a decorative piece of silver platter, which the Tudor upper-classes liked to display in their main audience chambers. The King had earlier promised the Queen's grandmother, the Dowager Duchess of Norfolk, that he would make her a fine present of display silver.
12. A partially-gilt chafing dish, which I think might have been used if the Queen wanted a late night snack in her apartments or, much more likely, on picnics. Better than tupperware.
Apparently, the Queen was very much on a decorating kick that year because she soon commissioned the young German artist, Hans Holbein, who had done some of the display areas for her coronation, to make a small solid silver fountain to sit in the centre of the Queen's dining table. (From what we can tell, Anne much preferred silver to gold.) Essentially what the Queen was asking Holbein to make for her was a form of fountain which would splash rose water into its basin, so that the Queen and her diners could wash their hands before, during and after the meal. It's this kind of attention to detail in things relating to odour and hygiene which the little details of Anne Boleyn's expenses show she was very much concerned with.

Luckily for us, although Queen Anne's present to herself no longer survives, half of Holbein's initial sketch of it does (below). It certainly looks extraordinarily expensive and very beautiful and it is  strange to think of Anne, her brother Lord Rochford, Lady Margaret Lee, Sir Henry Norris, viscountess Rochford, the Countess of Worcester, the Countess of Ormonde (Anne's mother), Giles de la Pommeraye, the Duchess of Richmond, Lady Margaret Douglas and others sitting around this gorgeous contraption,  sipping wine and picking over gourmet food served on gilt plates, talking amongst themselves. What did they talk about around this fountain? Did they discuss the Reformation? (Would they have called it that? Almost certainly not). Perhaps they discussed the news of various scandals they might have heard from the courts of Paris, Madrid, Vienna, Milan, Copenhagen and Stockholm. The shifting sands of European diplomacy, the downfall of men like Bishop Fisher and Thomas More, the intrigues of Eustace Chapuys, the future of the monasteries, the new theologies and the political idea that bit-by-bit was coming to be called "the Divine Right of Kings."

Or perhaps they discussed more trivial things that seemed so much more immediate to them as they went about their daily lives - the clothes the Queen was dispatching to her daughter, Princess Elizabeth, the princess's new governess, the decoration of George Boleyn's new palace at Beaulieu in Essex, Holbein's latest portrait, the most recent court entertainment, the Queen's newest gown, the sound of the peacocks in the royal gardens which the Queen so disliked, the health of the Queen's favourite spaniel, Lady Lisle's feverishly comic attempts to climb the social ladder or the work of the King's sugar sculptor, Mrs. Cornwallis. And perhaps there were things they did not discuss  - the Queen's latest miscarriage, the treachery of Thomas Cromwell ... Jane Seymour. Who knows what these people, long-dead, said or thought as they sat around a solid silver table fountain, occasionally dipping their hands into the rose-tinted water the fountain so ingeniously splashed into its gilded basin as the silver and the water stood shimmering in the undulating light of the candles which bathed the Queen's apartments in a soft twilight glow?
One of the wonderful things about trawling through the household expenses, the roll books and the inventories of the Tudor court is that they can give us a moment of feeling as if the period is very much alive and real. It gives us the ability to imagine a vanished world in its material reality and to be able to pick out some of the tiny, amusing, humanising, touching elements of the personalities of people like Anne Boleyn, who are all too often painted in broad strokes. I believe it's important to be able to do that when writing history. As the Goncourt brothers, authors of a biography of Marie-Antoinette in 1858, wrote: "A time of which one does not have a dress sample and a dinner menu is a time dead to us, an irrecoverable time."