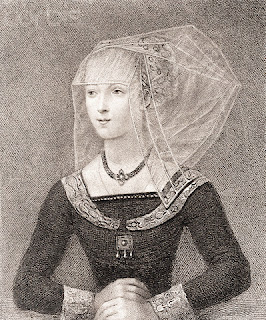 Historical novellist Susan Higginbotham discusses whether or not Elizabeth Woodville, Edward IV's glamorous but controversial queen, was once a lady-in-waiting to her equally glamorous and equally controversial predecessor, Marguerite of Anjou. Elizabeth, who was Lady Grey before her first widowhood and subsequent re-marriage to the womanising monarch, was the aristocratic daughter of a woman formerly married into the royal family - the Dowager Duchess of Bedford - and for a very long time there has been a theory that she served Marguerite as one of her ladies. Miss Higginbotham, however, seems to query this account of Elizabeth's early life, concluding: -

"The lack of any unambiguous contemporary reference to Elizabeth as a lady of Margaret’s leads me to think that while Elizabeth Woodville might have visited court from time to time in the company of her family, she was never one of her predecessor’s ladies."

For the full discussion, click here.
Posted by Gareth Russell at 16:41